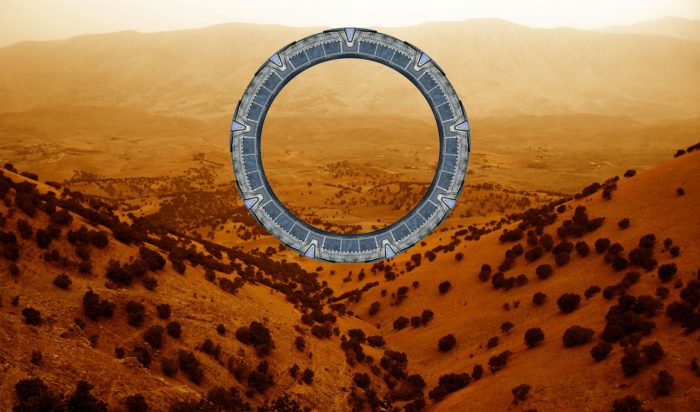 Although it is perhaps easily tossed to one side due to its sheer bizarreness, the conspiracy of a Stargate in Iraq being the reason for the invasion of the region keeps cropping up. So much so that even media platforms closer to the mainstream – albeit mockingly – have begun running the story.

We have written before about conflicts masking other purposes, or providing opportunities to carry out other missions. And the current conflicts in the Middle East are no different.

CGI drawing of a stargate with Iraq landscape in the background.

Then when you figure in the thousands of ancient relics, texts, and scriptures that have gone missing since the conflict began, plus the connections of the region to antiquity itself – a time, according to some, where this ancient technology existed openly – then it is perhaps expected that some people would begin to connect dots.

This is perhaps particularly the case with the Iraq War given the total murkiness of the whole affair. For example, the argument for Saddam Hussein possessing Weapons of Mass Destruction is largely disproven. The connections to 9/11 persist, and the apparent suicide of British microbiologist, Dr. David Kelly is still open to debate for some.

According to the claims, the discovery of an ancient stargate in Iraq in the 1920s would send discreet ripples around the world. Over the next decade, many world governments became aware of the discovery. Eager to obtain the technology for themselves, many of them descended upon the area through military units in search of it.

Some even point to the Anglo-Iraqi War of 1941 as simply a front between British governments and those of Germany and Italy (who had sided with Iraqi nationalists). This of course, in reality, was in order to gain control of the stargate, at least according to the theory.

Just to note, there is no solid proof of these claims, and it is not clear what happened to the stargate following the brief conflict. We know for certain that the Nazis did spend considerable time searching for ancient relics, however, including the Ark of the Covenant. Perhaps then, it isn’t beyond comprehension they should have an interest in a stargate, should it exist.

By the time of the Iraq War in 2003, which we will look at shortly, the stargate lay hidden deep beneath the palaces of Saddam Hussein. Following the taking of Baghdad, the area around the palace and the inner city would sit inside a Green Zone. This is a “diplomatic area” where government employees live and work. The whole zone is under extreme guard. Many remain suspicious of this.

Perhaps one of the stranger theories concerning the stargate is that of truth “hiding” in fiction – the Fairy Tale theory. Some researchers state that fact (forbidden knowledge) “hides” in fairy tales and myths in order to pass on truths. In modern times, some argue that these messages are passed on in movies and, to a lesser extent, television shows.

Connection to “The Garden of Eden” and Mythical Relics

Anyone who has seen any footage of the devastation left behind following the conflict will have heard the term, “Cradle of civilization!” The ancient Sumerian society – one of the first known “civilized” kingdoms – covered much of this land. They are essentially the civilization from which we all stem. Many also believe the remains of ancient knowledge and technology [1] are still awaiting discovery.

Many even believe that the “Garden of Eden” spoken of in The Bible and many other ancient writings, is likely to have been in modern-day Iraq – although rather than a magical garden, it was most probably some kind of biosphere, hence the need for a controlled environment.

If this were true, then it would stand to reason that other supposed ancient relics and wisdom might also exist. Again, remember the Nazis spent the better part of a decade searching around the world for such items.

Perhaps not too much of a stretch then to imagine that the US intelligence services might pick up where the Nazis left off in their search. When you look at Operation Paperclip, many Nazi scientists would continue their work for US interests following the end of World War Two.

How far did that work continue, and for how long is not completely clear.

The Orchestration Of The 2003 Iraq Invasion?

The reasoning for the first Gulf War in January 1991 was scrutinized by many, not least the testimony of Nayirah al-Ṣabaḥ, a fifteen-year-old girl who claimed to have seen Iraqi soldiers killing infants. This ultimately turned out to be completely false [2] and is largely seen as outright propaganda to gain support for pre-emptive action in Iraq. You can see the video clip below.

Perhaps then, it is not surprising that people were suspicious of George Bush Jr., backed rather eagerly by UK Prime Minister, Tony Blair when they went against UN reasoning and entered the country in March 2003. Was this simply the continuation of George Bush Senior’s attempt to enter Iraq?

Many who believe the reason for the wars was not just regime change point to George Bush Sr. and his past role in the CIA. And then, in turn, they cite his high ranking role under Ronald Reagan before that. If anyone knew more than any other individual person on secrets of American government, it would arguably be him.

The Iraq War of 2003, and the events leading up to it, stretching at least to the 9/11 attacks in 2001, are all wrapped in conspiracy – so much so, as is perhaps the intention – that unraveling the complete truth from the accusations and theories is practically impossible.

Indeed in a matter of days, the country would be under US control. The US military would oversee the installation of “democracy” for the Iraqi people. It also, many argue, gave the US intelligence agencies undisturbed and unblocked access to whichever part of the country they wanted.

Check out the video below which looks at some of these theories.

As the invasion of Iraq progressed so did the disorder. Looting would become rampant, in particular at museums and government buildings containing ancient and priceless relics. Many witnesses, however, would speak of special military units carrying out much of the looting. Even of loading entire vaults worth of relics onto heavy-duty trucks. Literally, thousands of items disappeared.

Some of these stolen relics would turn up in Europe on the black markets. Many, however, seemingly vanished into thin air. To some people, this was a modern example of ancient knowledge being removed from the general population. This in order to maintain control and keep most people ignorant. Remember, the Fairy Tale theory, of forbidden knowledge “hiding” in myth and fiction?

In the same way, as the Vatican face accusations of hiding such documents and ancient knowledge away from the general public, the seemingly US sponsored seizing of such wisdom from the birthplace of modern civilization is perhaps taking place right under the world’s collective nose. Is the Iraqi Stargate a part of that operation?

Microbiologist, Dan Burisch, a name many know in the UFO community, claims that the true purpose of the Iraq War was to locate and obtain exactly that. There are claims that the stargate was not the only thing found. Also, a network of tunnels that stretched for miles and connected to other secret locations. Perhaps, even to locations in other countries?

If the leaks regarding the “Mother Of All Bombs” targeting US Intelligence-created tunnels in Afghanistan are true, then you have to question what the real purpose of those tunnels was. And why choose the time they did to destroy them? Is it “merely” an operation in flexing their military muscles to back up the war rhetoric? Or, indeed realizing conflict is becoming increasingly likely, was a decision made to destroy evidence of them? Before they fell into “foreign” hands – whoever those hands might belong to?

Crazy talk granted, but only to a point. Only as crazy as theories of intelligence agencies involvement in drug trafficking, or perhaps as crazy as claims of a widespread conspiracy in the assassination of President Kennedy. Basically, as far-fetched as these kinds of claims and theories are, maybe our collective rejection of such “crazy” theories in the past – theories that have since proved to be very true – should make us a little more hesitant to outright reject claims without investigation now.

Quite often, we find out later, that although the specifics are not correct, the general premise is very accurate. So, while the Iraqi Stargate, may or may not exist, there is almost certainly a larger, likely much darker, picture underneath the “official” activities.

In short, perhaps it is not always important what the question is, just that the questions continue. Somewhere between the mundane and the extreme, the truth is likely waiting. 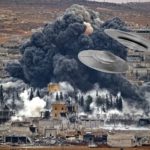 UFO Conspiracies Of The Gulf Wars 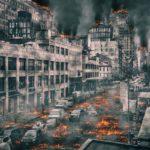 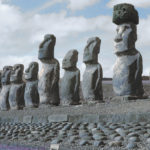