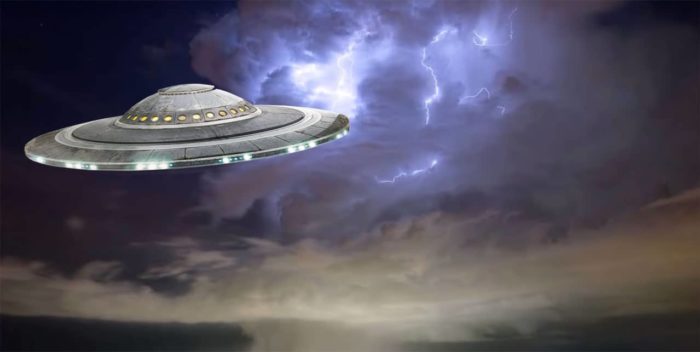 While most people – believers and sceptics alike – almost certainly imagine space travel and aliens when they hear the term UFO, there are many other theories on offer. Might these strange sightings be of time-travellers for example instead of aliens? Might they be nothing more than “phantom” sightings – some type of “rip” in space time that allows us to peek into the future or the distant past?

One particularly interesting alternative theory is that what we are actually witnessing are visitations from another dimension, as opposed to from another planet.

In June 2016 a story appeared online that appeared to show a UFO entering a portal [1] before completely disappearing into it. The event was captured on video and from start to finish lasted less than sixty seconds. A low rumbling sound is also audible throughout the recording.

There have been many declassified FBI documents relating to UFO activity, and at least one refers to “beings” from another dimension to ours.

What is interesting about the document is that it is dated 8th July 1947 – the same date as the Roswell UFO incident. The document writer acknowledges that the claims made within it are likely to be ignored, but the fact that they are put in front of the FBI in order to investigate is intriguing enough.

The idea that these UFOs are not travelling through space to get here, but simply materializing in to our plain of perception upon hitting the “vibratory rate” is one that has been theorised before this document was made public.

The Interdimensional Hypothesis is one that suggests UFO and alien sightings are actually visits from beings from different dimensions or realities. These realities exist alongside the one which we reside, and far from being a modern phenomenon, they go back to the very beginning of not only our planet, but the universe.

There have been several modern incidents that indeed appear to suggest the opening of some kind of inter-dimensional doorway or portal however.

Native Americans speak of such legends, and state that even today these doorways exist. One place in particular is said to be in Sedona, in the Arizona Mountains. Known as the “Doorway to the Gods” [3] an arch carved out of the stone is claimed to transport anyone who walks through it to another place in the universe.

In August 1971 on the other side of the Atlantic, while attempting to “tap into the vibrations” of the ancient megalithic site Stonehenge, a group young hippies appeared to vanish into thin air amid a strange blue light, [4] seemingly coming from the stones themselves. The incident was witnessed by a local farmer and a patrolling policeman. By the time the pair had made their way over to the scene, all that was found was the remains of a fire and several smoldering tent pegs.

Whether the incident is more urban legend than solid fact is open to debate, but many others have theorized that Stonehenge, like other ancient sites, was built intentionally on ley lines. When these ley lines are tapped into, at least according to the theory, they can produce enough vibrational energy to open a portal to another place.

A portal above the CERN collider?

Ancient “Gateways” and “Stargates” To The Land Of The Gods!

There are several accounts of “doorways” or “portals” to other worlds and dimensions that date back to ancient times. Most speak of “visitors” entering into or leaving our planet through these doorways.

Abu Ghurab in Egypt for example is known as the “Place of the Gods” where a platform made from alabaster vibrates in tune with the Earth and allows a person to “be one” with higher energies. The “Gate of the Sun” at Tiahuanco in Bolivia is also said to be a portal to the land of the gods.

Perhaps one of the most famous of these ancient sites though, is the “Gate of the Gods” [5] at Hayu Marca in Peru. In solid rock there are carved two doorways in a “T” shape. Measuring seven meters high and seven meters across, inside this gigantic “T” shaped doorway is carved another door – this one much smaller at two meters high. According to legend, the large doorway is for the gods, while the smaller one is for humans (or mortals) who have performed heroic or noble actions.

A further legend states of the doorway last being opened in the sixteenth century amid the arrival of Spanish explorers to the land of the Inca. As the Spanish looted anything of value they found – including gold and valuables – an Inca priest, Amaru Maru, escaped the pillaging, taking with him an ancient golden disk.

According to the story, this disk was “The Key of the Gods of the Seven Rays” and could be used to open the doorway at Haya Marca. When Maru arrived at the gateway, the disk allowed the smaller doorway to open, unveiling behind it tunnel that was enveloped in a shimmering blue light. It is said that Maru stepped inside and was not seen again – at least not in this world.

Perhaps interestingly is that researchers at the site have made note of a strange “round indention” in the rock of the doorway. You can check out a short clip below from the TV series “Ancient Aliens” that looks at Hayu Marca in a little more detail.

The Large Hadron Collider (LHC) has been subject to numerous conspiracy theories since its inception. While most are probably a little off the mark, it is easy to see why some people with suspicious minds may raise an eyebrow or two over the activities there.

The project is run by CERN (European Organization for Nuclear Research). The work carried out there is indeed looking to understand the secrets of the universe, including bizarrely or not, whether parallel or alternative universes and dimensions do actually exist. For as many people who are excited about their work, there are equally as many who condemn it.

The short video below takes you on a “tour” of the LHC and explains a little bit more of the work that is carried out there.

In June 2015 reports were made of a “portal to another dimension” [6] being snapped on camera above the skies of Holland in the town of Groningen. The photographer, Harry Perton, originally thought he had captured a flash of lightning when taking the photograph, but soon realised he had captured something a little more enigmatic.

Perton posted the image online which led to a barrage of theories as to just what the strange green “upside down jellyfish” was.

One particular theory soon appeared that stated a belief that the “portal” captured by Perton was connected to the Large Hadron Collider having recently been turned back on – at double its original power to boot.

A year later in June 2016, CERN began a new experiment called “Awake” which led to more strange anomalies in the skies above LHC’s location. Many argued this was proof of “doorways to other dimensions” being opened by CERN, while others stated it was simply a manipulation of the photograph to make the clouds appear more intensely than they normally would.

Although many people have various and wide ranging theories regarding both CERN and interdimensional travel, it seems that ufologists with particularly strong religious leanings subscribe a little more than most.

Some of these religious groups fear not only that CERN are opening a gateway to another dimension, but that gateway will prove to be an entrance to Hell itself. Some such groups even go as far as to say that such sightings of aliens are actually the manifestation of demons. In a similar way that perhaps ancient astronaut theorists use ancient texts to make their case, so do such religious UFO groups – in this case The Bible – as proof that their theories are coming true. Indeed a lot of them will tell you that the “end of days” is upon us. 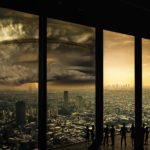