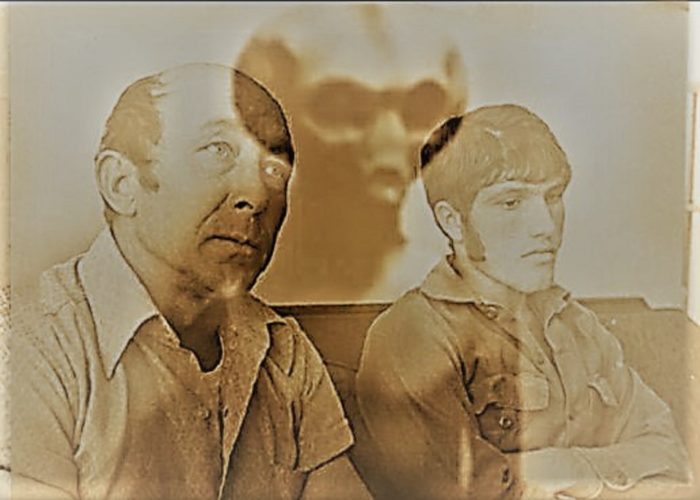 In our recent article looking at the Mansfield Incident of 18th October 1973, we mentioned that the encounter took place in the middle of a wave of sightings throughout the United States. One of the first of those high-profile incidents took place the week prior to the events in Mansfield, Ohio, over the Pascagoula River in Jackson, Mississippi. And more than just a sighting, the two men involved would claim to have been taken against their will on board a huge, other-worldly craft.

The incident became national mainstream news, and many ufologists and researchers would descend to the area. Each was looking to investigate the site as well as speak to the two apparent abductees. One of the men involved in the out-of-this-world experience, Charles Hickson, would go on to pass lie-detector tests regarding the authenticity of the encounter and would speak to anyone who was interested. His fellow witness, however, would not fare so well, and only very recently has he begun to deal with an event he would state “turned his life upside down!”

The incident itself, despite heavy skepticism from some, is widely regarded to be one of the most fascinating and most investigated claims of alien abduction, behind the Betty and Barney Hill incident of 1961 and the Travis Walton abduction that would happen two years later in 1975.

On the evening of 11th October 1973, two Wagner Shipyard coworkers were fishing on the Pascagoula River in Jackson, Mississippi. 42-year-old, Charles Hickson and 18-year-old, Calvin Parker each sat on the east bank pier enjoying the serenity.

That serenity, however, would be forcibly broken by the sudden sound of an uncomfortable “whirring”. [1] Hickson would later describe it as a “hissing sound!” The two men scanned their surroundings, eventually locating two “flashing blue lights” heading towards them. Within moments they could each make out a huge, metallic oval-shaped object overhead. The craft was around forty-feet in length and at least ten feet in height.

Then, the door opened. Bright light from inside the craft bathed the pier in its glory. So much so that the two men had to focus to see the three robot-like, grey humanoid creatures floating down towards them. As they got closer Hickson could make out finer details. He would later state they had “no neck” and their grey skin was “very coarse and wrinkled like an elephant’s!” In fact, so wrinkled was this strange skin, that he couldn’t make out any eyes. He did recall “projections” where ears would normally reside. Perhaps most chilling were the hands, which were claw-like, in the shape of a “hand with mittens with no fingers!”

Both men were “conscious but paralyzed” as the three creatures “floated them” aboard their craft. 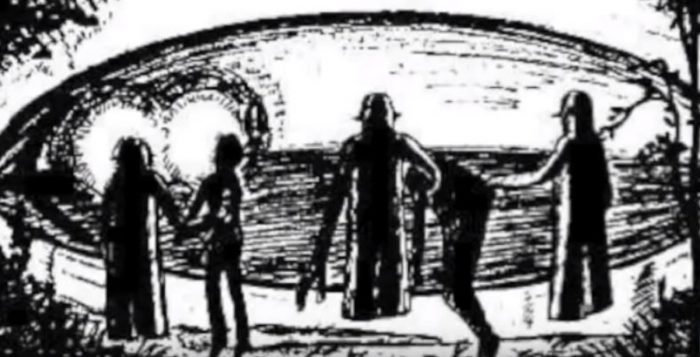 Sketch based on Hickson and Parker’s description

On Board And Examined

Once inside the strange ship, each man was subjected to a medical examination of some kind. [2] According to Hickson, a “football-shaped probe” would appear out of the wall and then move slowly around his body. He wasn’t sure how long the examination took to complete, stating it could have been anywhere between thirty and ninety minutes. One particularly interesting detail offered by Hickson was how “there was light everywhere, from the ceiling, the walls, the floor!” This is a detail that comes up regularly in alien abduction cases – brightly lit rooms with no actual visible source.

Following the examination, he suddenly found himself back on the pier. Parker stood there also, looking to be in a trance. His arms remained stretched out in front of him and his gaze continued forward. Hickson realized his friend was completely in shock.

The men quickly left the pier and sat in their car. Hickson had a sip or two of whiskey while each of them made attempts to process what had taken place. They ultimately decided to report the incident. After an initial call to Keesler Air Force Base, who informed them “they didn’t handle that sort of thing”, they would call the local sheriff.

Once at the Jackson County Police Station, initially not believing their story, police would leave the two witnesses together in an interview room. Unbeknown to Hickson and Parker, they had also left a hidden tape recorder. Glenn Ryder, the man who questioned the two men recalled, “We left them to talk, to see if they were going to say ‘Well, we got them fooled’, but they didn’t. They were really concerned!”

The two men did talk, but their conversation only served to strengthen their claim. For example, at one point, Hickson is heard saying to Parker, “It scared me to death too son. You can’t get over it in a lifetime!” Ryder would also recall how the longer he watched the two men, the more evident their genuine fear was.

You can listen to that “secret” tape-recording below.

Hickson claims both he and Parker made requests for the incident to remain “quiet”. However, the following day, state newspapers ran the story on their front pages. Within days, Jackson Mississippi was the focus of UFO enthusiasts far and wide. Reporters would congregate around the Wagner Shipyard premises seeking to speak with the two men.

There were, incidentally, several UFO sightings on the evening in question. Most described what they believed to be a “helicopter-like object” with blue lights. Following the encounter on the Pascagoula River, however, local police would face a wave of UFO reports. While many of these proved to be hoaxes, others are still unexplained.

While Parker was not at all at ease with either the incident itself or the publicity that came with it, Hickson was more than happy to talk. Following his initial shock, he would become fascinated with such encounters. His son would state several years after his death in 2011 that he “only wanted to let everybody know we were not alone. He didn’t care whether you believed him or not!”

He would report three further UFO encounters the following year in 1974 and would ultimately write of his experience in the 1983 book ‘UFO Contact at Pascagoula’.

Parker, by contrast, would eventually take “out of state” jobs so that he could, temporarily at least, escape the attention. He would state recently that although the attention is not what it once was, both he and the area of the incident are both still magnets for UFO researchers and investigators.

Perhaps the fact this is the case, despite no markers at the site of the incident, and with no effort by the local community to “cash in” on it by selling “UFO souvenirs” or by having bars or restaurants with alien themes might be testament to the authenticity of the encounter. Hickson’s eagerness to speak about the incident aside, both men’s reputation suffered greatly following the encounter. And there is little to suggest a predetermined plan on either man’s part. Until perhaps details in other cases shines more light on the alien abduction phenomena, this particular case will remain a mystery.