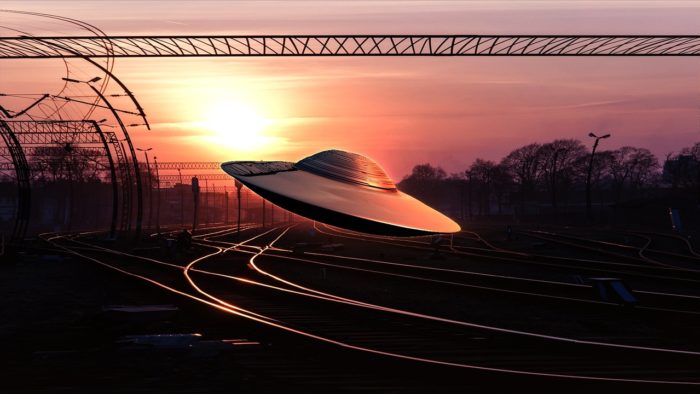 We recently looked at the accounts of Daniel Leger, who would claim an encounter with a mysterious woman during the Second World War, who appeared to have arrived here from somewhere else in the Universe.

A depiction of a UFO over rail tracks

As fascinating as that account is, it is an apparent trivial piece of information in relation to another other-worldly encounter over a decade later, and across the Atlantic Ocean, in the United States that is of interest here. In fact, as we will look at later, there are several intriguing details that come up in many such encounters. This allows us to put together, in theory, what the make-up and abilities of these apparent space-ships might be.

The following account was most recently brought to the public by respected UFO researcher, Timothy Good, in his 1998 book, Alien Base – The Evidence For Extra-Terrestrial Colonization Of Earth.

The encounter in question would first find its way into the public arena thanks to UFO researcher, Jean Sider. It was published in ‘Le Croix’ newspaper, the publication the unnamed witness would give his report to. For their part, the newspaper (considered a reputable publication itself) would vouch for the authenticity of the witness.

In October 1954, at an unknown military base, the witness would notice a strange disc-shaped object off in the distance. He went a little nearer to the object and soon noticed a humanoid being emerge from it. It appeared to scan its surroundings, picking up samples of rocks, leaves and a bird’s nest from a nearby bush. It then quickly re-entered the craft, which would then rise and vanish.

He would keep the incident to himself initially. However, several days later the saucer-like craft would appear again, this time right in the middle of the base airfield. And this time, multiple witnesses were present. As the being again emerged from the craft, the military unit began to approach cautiously.

Paralysis from a “Strange Fluid!”

When the unit got to within several feet of the being, it cast some kind of gas in their direction. It was later described as a “strange airborne fluid!” The entire squad would suffer instant paralysis.

Perhaps even stranger, after examining the area around the saucer, the creature entered a smaller, cigar-shaped craft that stood to one side of the disc. The saucer remained on the ground, while the cigar craft sealed, rose from the ground, and vanished into the sky. As it did, whatever was keeping the unit paralyzed would lose its influence, with each soldier able to move again.

The description of the being, now seen close up, was of a small, stocky built humanoid figure. Its face, however, was much more aligned to that of a monkey or ape. Whether it was clothes or its body, it appeared as though covered in long hair or fur. It also had what the witness would describe as a “piercing stare” – one of awareness and intelligence.

Perhaps what is interesting here, is the similarities to descriptions of a Bigfoot creature. Sightings of such beings, often occur in UFO hotspots. Furthermore, many surges in sightings often corresponding to an equal surge in UFO activity.

With the being now safely away from the unit, their ability to move normally restored, they turned their attention to the strange disc waiting patiently on the airfield. 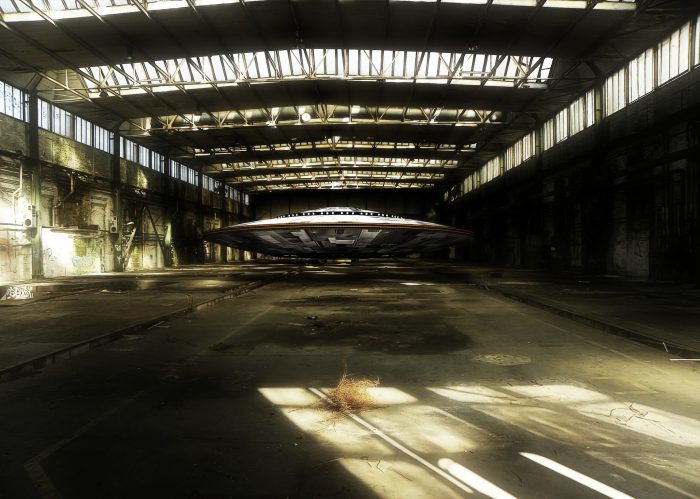 A depiction of a UFO in an aircraft hangar

The disc itself sat on ski-like legs, again something that surfaces in many UFO reports of such close contact. Although there were obvious portholes, as well as a raised dome, there was no obvious entry point into the craft. Wherever the creature exited from, was no longer visible.

The outer material itself was “extremely smooth, resistant, and couldn’t be raised, either by stamping or adjustment!” Welding equipment eventually succeeded in prying into the strange craft.

Chemical engineers would also conduct tests on the make-up of the material. While they were able to detect it being a composition containing gold, iron, and lead, they were unable to successfully reproduce it using these known elements.

They eventually succeeded in gaining entry to the interior. The inside had a strange, rubber material. They would also detect a “heavy gas” was present inside the craft, which engineers theorized could be some kind of artificial atmosphere. Although they discovered what seemed to be “throttles”, they couldn’t see how they might work. Most confusing of all to those inspecting this mysterious vehicle, there was no sign, either inside or out, of any kind of engine.

The last detail offered by the witness is perhaps the most intriguing in relation to the aforementioned Leger account, when he stated, “It seems as though the pilot had been travelling on all fours on the floor. We found sort of ‘suction pads’ where hands and knees would have been!” Leger had claimed to have seen the being in such a position during his encounter.

According to the witness, knowledge of the incident remained inside of the airbase perimeters, with a “black-out” placed on reporting the incident (at the time).

So, would it make sense for these types of disc-shaped craft to essentially be under the control of a single pilot? Their positioning inside as though they are sat upon a high-powered motorbike?

What about the “suction” type handles on the floor of the craft? Might this quite literally be a method of control where a lean one way or another, would take the craft in that direction? Perhaps, as some reports state, there is an element of telepathic control to the craft.

And what about seeing in terms of piloting the craft? If reports are correct, once the pilot is inside the craft, it seals shut so from the outside it appears as though it is one piece of metal with no breaks or seals. Perhaps it is worth noting the many accounts of people who claim to have been inside and even travelled in such crafts, that the floors, walls, ceiling, or sometimes all of the aforementioned, become transparent allowing those inside to see outside – similar to how blacked-out windows on high-security cars work.

Maybe the rubber-like interior that often crops up in UFO reports is a contributing factor in this transformation. Or perhaps it is also why many reports speak of solid, almost unbreakable exterior, that is also extremely light, too light for its strength almost.

Check out the video below. Another Top 10 UFO sightings. 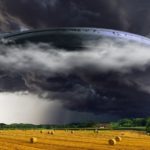 UFO Activity Over The American Midwest