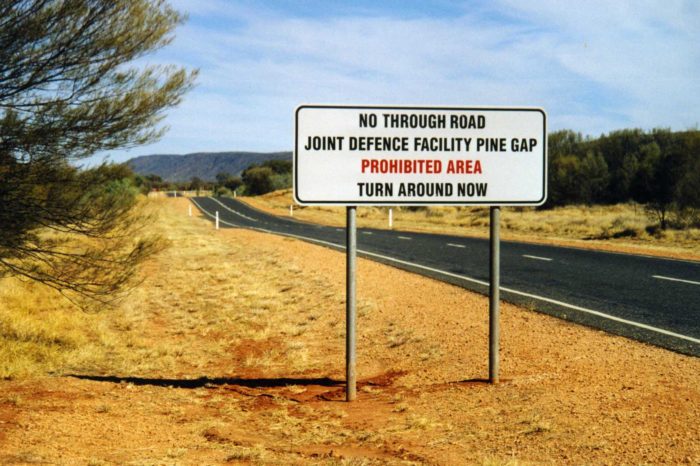 A joint-venture with the US military, Pine Gap is arguably the most secretive location in Australia. Furthermore, it is synonymous with UFO activity and has been for decades. The base officially came into existence in 1970, but some researchers believe witness statements suggest it was operational since the end of the Second World War.

Although there are huge domes (radomes) on the surface, the vast majority of the working base is underground. Sitting pretty much in the middle of Australia, south of the MacDonnell Ranges and to the west of Alice Springs, it is a perfect place to get a signal in and keep other signals out.

In truth, the desert lands of mid and south-western Australia have always had its fair share of strange phenomena and bizarre sightings. However, upon Pine Gap’s construction, this activity would increase dramatically. For their part, the Australian government did their best to avoid any talk of the facility. That was until December 1989 when a strange sighting received, albeit limited, coverage in the mainstream news.

Before we look at that account, check out the video below. It is a segment from a 1977 documentary and features details of Pine Gap.

While returning from an all-night hunting trip, [1] at around 4:30 am in the early hours of 22nd December 1989, three men would be witness to a surreal encounter. While roaming through land near to the Pine Gap facility, sudden activity in the grounds of the base would catch their attention.

A camouflaged door suddenly opened before them, revealing lights and movement behind it. From inside this hidden enclosure, a metallic, grey disc emerged. No sound accompanied its movements, and aside from their own breathing, all around them was silent. Suddenly, but still with little sound, the disc shot off at an amazing pace, certainly beyond anything any of the witnesses had ever seen. The door then calmly shut, hiding its presence once more in the process.

The report would arrive with UFO researcher, John Lear, via a university professor. In it, he mentions that “all of the witnesses are reliable though understandably rather reluctant to discuss what they saw!”

He would also state that “this state has more UFOs coming and going than anywhere else in Australia!”

Given the claims from some researchers that “contact” has already happened, might Pine Gap be one of the alleged alien-human bases around the planet? Or might the disc-shaped craft that emerged from the hidden door be the result of military back-engineered technology.

Investigations into the area would soon reveal plenty of similar sightings on record.

A Hive Of UFO Activity

For example, in 1980 while searching for a missing child, two Northern Territory police officers would report a “camouflaged door” suddenly opening. Objects they would later describe as “bathtub-shaped” left from this doorway and calmly made their way over the base. To their amazement, a “black hole” opened in a hillside, and each of the objects vanished into it.

Five years previously, in 1975, a small private passenger plane was flying near the base. As most on board were already aware of Pine Gap, most would witness the “large white object” zoom into the air and vanish out of sight in a flash. Shortly after landing and making a report, officials would visit the pilot and the crew. They were told not to talk about what they saw.

One of the strangest incidents occurred in 1973. A cartographer, working for the Australian government, was parked near to the Pine Gap base. It was late – just after midnight. Out of nowhere, a strange but intense “vertical shaft of blue light” came from the confines of the base.

Giving in to his curiosity he drove his vehicle closer. He was shocked to see a disc-shaped craft hovering around a thousand feet in the air over the base. He raised his binoculars to his eyes. As he did, another blast of cold, blue light, emerged. It was coming from the center of the craft and heading down to the domes of the base. After several moments it went off. Then, a similar laser-like light extended from somewhere on the ground to the disc above. This went on for over thirty minutes before the disc began to spin rapidly. It then shot off into the night sky at great speed. 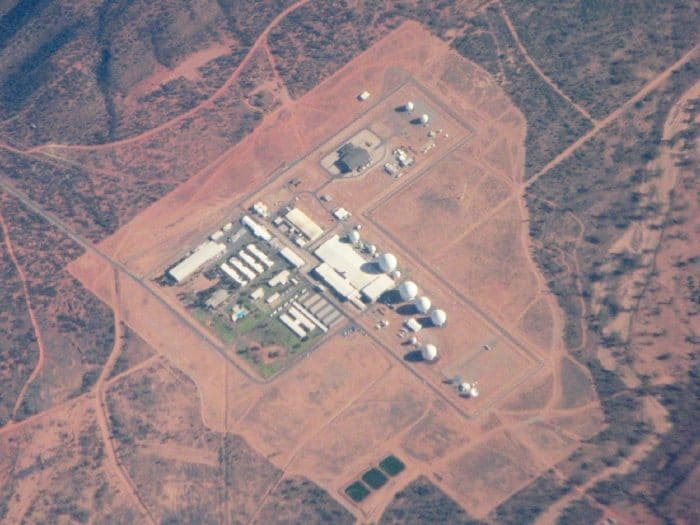 “Something Big Is About To Happen!”

Perhaps one of the most intriguing sightings occurred at some time during 1984. [2] What is particularly interesting about this account is that it features five members of the Australian government (possibly defense), essentially spying on their American colleagues. The venture was of their own deciding, however, and so as not to reveal themselves to their own superiors as well as their guests, the identities of the witnesses are unknown to the public.

There was also a certain amount of mystery as to the witnesses even being at the base in the first place. The leader of this group had recently received numerous reports of UFO activity in the area in and around Pine Gap. One particular message, however, would state that between certain dates (thought to be a five or six-day window – the details and the dates remain unknown) “something big was going to happen!”

Fascinated with what this could mean, the five people would split into two groups. Packed with specially designed telescopes with full night vision capabilities, they would set off in two vehicles. Each would approach Pine Gap from a different direction. One would close in from the west and the Gibson Desert, while the other would approach from the north and the MacDonnell Ranges.

They would even travel only at night once they were within a predetermined radius of the base. When they arrived at their agreed positions, they would wait and begin their unofficial stakeout.

Each unit would stay in position for three whole days without witnessing any activity at all, much less anything strange. On the fourth evening, however, things changed and increased activity around the base began. Large military vehicles were moving around the base and groups of workers were gathered at specific points, usually near the large radomes.

Just as sudden as it began, the light shut off. Before the five witnesses could get their bearings, however, the light appeared again, only this time coming down from above and hitting the grounds of the base. It was at this point that the witnesses saw for the first time five strange objects above the base. Four of these were in a “diamond formation”, while behind them was a cylinder object.

The first four objects moved into north-east-south-west positions, while the cylinder-shaped object positioned itself in the middle of them. Then an intense solid light, this time blue, hit the ground from the objects above. The strange cloud formations also appeared high up the beam.

This continued for several minutes before the lights shut down and the five apparently alien crafts slowly rose upwards before vanishing in a flash.

Although none of the witnesses knew what they had just seen, all agreed that the rumors of established contact with an extra-terrestrial race were apparently true.

More recently the Pine Gap facility came under scrutiny for links to US drones. [3] In particular those responsible for the deaths of Pakistani civilians. According to a lawyer in Pakistan in July 2013, the intelligence that drives these drones originates from Pine Gap.

These links and the activities of Pine Gap were perhaps looked upon with even more suspicion following the apparent revelations of Edward Snowden. According to Snowden, Pine Gap was one of the key bases where such agencies as the NSA monitor citizens’ communications from. Officially, Pine Gap is a tracking station for the many satellites in orbit around the Earth. It appears that all of the US spy satellites are indeed controlled from Pine Gap.

The video below looks at this a little.

Furthermore, there are around a thousand employees at the Pine Gap facility, most of whom reside in nearby Alice Springs. Most of these employees are either US or Australian intelligence workers. However, according to those who have reported and researched the town, any American you come across will likely tell you they are a “gardener” or hold another low-key job. This, these researchers say, is almost certainly an indication that they really work at Pine Gap.

This apparent secrecy and clandestine nature around Pine Gap and those who work there also opens the door to more outlandish claims. In his book, ‘Underground Bases and Tunnels’, Richard Sauder would write about claims of the base operating in alternate dimensions. Pine Gap is also mentioned in connections with the secret “time-travel missions to Mars” as a launch point. As crazy as those suggestions might be, might they at least begin to explain the bizarre blue and gold lights witnessed in the aforementioned accounts?

The video below looks at Pine Gap in more detail. 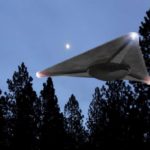 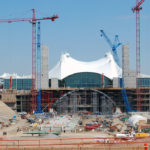 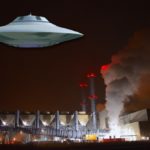