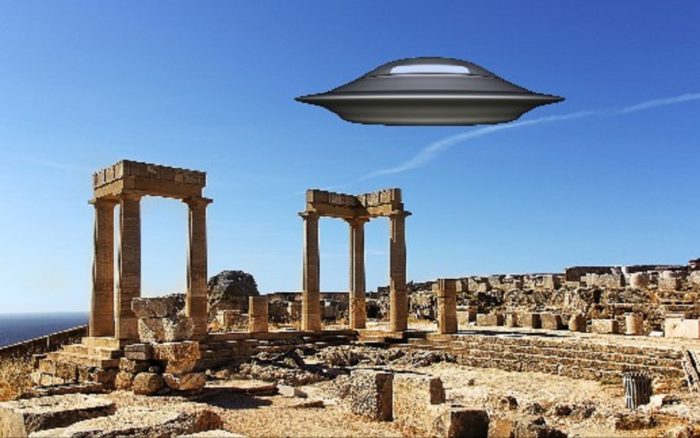 In September 1990, a troubled UFO would plummet to the ground in Greece. Several locals witnessed the incident. As well as the apparent retrieval of the ruins by the extraterrestrials themselves. The site of the activity was further investigated by multiple residents in the immediate hours after the encounter before Greek authorities would seal the area off and announce there was nothing of consequence to report. Those that were there, however, believe they know otherwise.

A superimposed UFO over Greek ruins

As we come to the end of the second decade of the twenty-first century, it would appear that sightings of strange aerial objects over mainland Greece and its islands are increasing. Furthermore, one of the places these sightings are happening regularly is perhaps one of the most famous and ancient monuments of antiquity. And one, if you subscribe to the ancient astronaut theory, that has a long connection to extraterrestrials in the distant past. Extraterrestrials that history records as gods.

Shortly after 3 am in the early hours of 2nd September 1990, half a dozen strange brightly lit crafts moved silently over the skies of Megas Platanos in Greece. [1] Several people witnessed the events – mainly shepherds and local residents. As all looked on from their various vantage points, it was clear to each that one of the apparent UFOs was flying erratically.

Trantos Karatranjos, a shepherd working in the area would state to investigators that the erratic flying UFO suddenly “crashed to the ground”, freefalling and landing around 500 meters from where he stood. He could see flames and fires spreading to bushes nearby. Nevertheless, he remained where he was, thinking it unwise to get any closer. It was a decision that, in retrospect, was correct.

The remaining five crafts were now hovering over the crippled object. Suddenly, two of them began a calm descent to the ground close to the crash site. Karatranjos soon realized the fires were no longer burning and assumed this was down to the landed UFOs.

For several hours until dawn announced the immediate onset of day, there was increased and dramatic activity from the crash site to the skies overhead. Several strange, small lights seemed to “dive” down, hover for several moments, and then bounce back upwards. One witness described these as “light spots”. Investigators would theorize these lights were likely part of an “alien retrieval” team.

While only a handful of witnesses saw events unfold in their entirety, numerous people had awakened before dawn and many of them witnessed the “retrieval lights” performing their apparent duties.

As daylight took over, a small group of local residents ventured to the spot of all the activity. They noticed a dark, burned oval shape on the ground. Witnesses to this makeshift investigation would state how the edge of the oval was extremely acute “as if it had been cut with a knife”. They also discovered tiny pieces of “metallic remains” and “small wires”. Many witnesses took small parts home with them as souvenirs. Their whereabouts today, however, is largely unknown.

It is almost certain, at least according to local witnesses, that some of the remains went to the Hellenic (Greek) Air Force, who would arrive to “investigate” the scene for themselves a little later in the morning. Witnesses recall them taking what little remains were left with them.

They would make an official statement that what they had witnessed was a “Soviet satellite” or a “small plane”. Of course, to those who witnessed the events close up, this was nonsense. What they saw, they believed, was certainly not a satellite or a helicopter.

While the incident in Megas Platanos is arguably one of the most intriguing and talked about Greek UFO sightings, there have been several other equally intriguing encounters in the 2000s. And what’s more, these sightings appear to be increasing in this part of the world today. 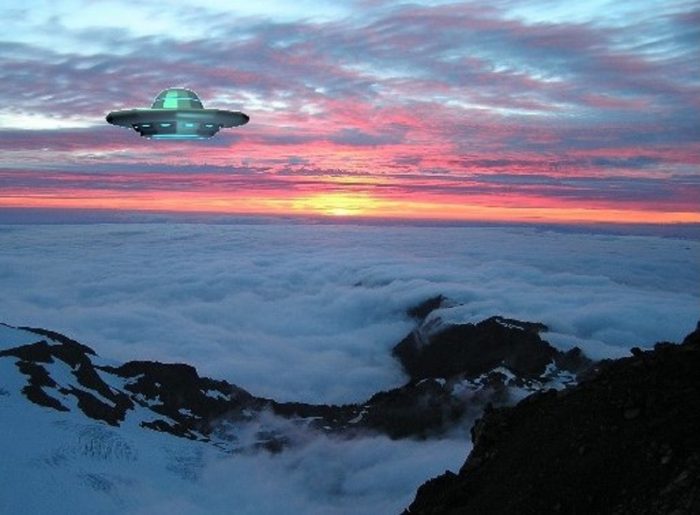 A depiction of a UFO over Mount Olympus

Just after 8 pm on 19th February 2009, an unnamed woman was making her way back from work. She had taken a taxi due to a carnival parade nearby. However, once on the road, the vehicle experienced no delays. In fact, they were one of the very few drivers on the main road running along the Thessaloniki coast.

As they drove, the lady noticed lights overhead. The airport was close-by and it was perfectly normal to see planes coming and going at all hours of the day and night. However, these lights were now motionless and hovering in the same spot. She continued to watch them for several moments. As she looked closer she could see they were more akin to three tightly-packed white-yellow lights that circled around each other.

At this point she asked the driver to open the passenger window, making the excuse of feeling unwell and needing some fresh air. He did so. As she positioned her head outside of the moving vehicle she realized they were now directly underneath the strange object. It was most certainly a solid disc-shaped structure, “about the size of three helicopters”. It had a dull “grey, metallic” look to the exterior. The three lights were moving around inside of this structure. She could also see a small red light, seemingly fixed in the middle of the underside. All the while, this strange, other-worldly craft remained completely silent.

As the driver was apparently not aware of the craft (and would likely not want to stop anyway due to wanting to get to his next fare), the witness stated she walk the remainder of the way. She paid the cost of the ride and exited the vehicle. However, by the time she turned her attention skyward, the object was no longer there.

Sightings From The early-2000s Near Mount Olympus

Between 2003 and 2005 came reports of several UFO sightings in the town of Katerini which is overlooked by the ancient Mount Olympus. It is also near to Thessaloniki. The report would come from a family who wished to remain anonymous, but who were comprised of five people – the main witness, their parents, sister, and cousin.

According to their report, all five witnessed sphere-shaped crafts in the skies over their small village. These sightings would occur during the day or at night. The objects were extremely fast and shiny as if they are “made of mirror”. The main witness would also state that rumors and theories were rampant regarding an “alien underground base” in Mount Olympus.

However, it wasn’t just lights in the sky that the family had witnessed. According to the report, the “cousin” had also seen “an entity” in her house on several occasions. These sightings would always occur at night. This strange creature stands around three feet tall with “reptilian-brown skin and white hair”. It also wears something akin to a robe or a gown. The couple at first thought it was a demon and their home haunted or possessed. Only later did they begin to suspect the creature may be connected to the lights around Mount Olympus.

Whether there is an alien base in Mount Olympus is certainly up for debate for some. Strange sightings, however, date back to the times of ancient Greece. With some even claiming the “gods” who called Olympus home were, in fact, extraterrestrial rulers. 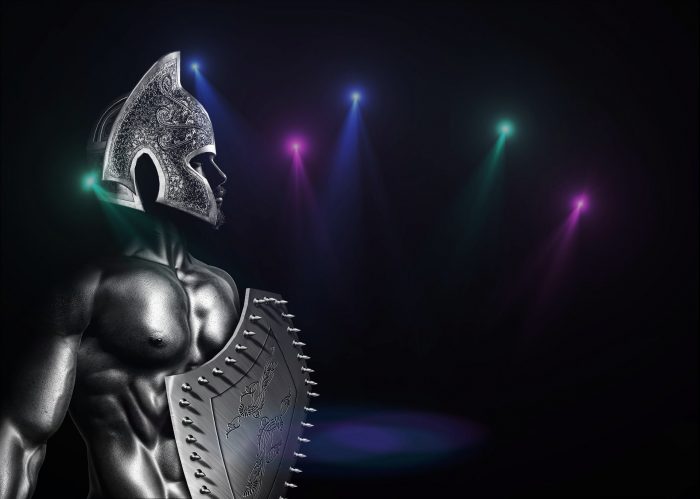 We have looked on several occasions of UFO sightings and accounts from the distant past. Two sightings from the times of the ancient Greeks, however, stand out. According to the writings of ancient Greek historian and biographer, Plutarch, these incidents occurred in 83 BC and 75 BC respectively.

The first took place in what is now Albania as the Roman General Syllas prepared to march on Greece. As they marched onwards they would encounter a strange entity in the modern-day city of Dirach, then called Apollonia. In this “sacred place with a steep and narrow valley and rivers of fire”, several soldiers would catch a “satyr”, described as a “strange creature” who couldn’t speak but instead “cried like a goat or a horse”. It doesn’t say what they did with it. However, it must have looked humanoid enough for them to attempt to question and communicate with it.

Just short of a decade later around 75 BC, during the third Mithidratic war as the Roman and Greek armies prepared to face-off on the battlefield, a strange object came into full view of each of the armies. Plutarch writes “the air opened and there appeared a rapidly descending object resembling a flame”. [2] This object was “like a vase in shape” and would glow a burnt orange color. It would land in the open space between the two opposing armies. Both sides would retreat, and the battle didn’t go ahead. Whether this was purposeful intervention, or a coincidental sighting is perhaps up for debate. That they were witness to something surely isn’t.

The video below looks at the apparent connection between the “gods” of ancient Greece and extraterrestrial entities. 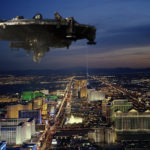