Most of us have heard the term “Foo Fighters”. And those in UFO circles know these are (largely) strange orbs witnessed by fighter pilots in the Second World War. However, while these orb-like sightings are perhaps the most well-known of such incidents during the early-to-mid-1940s, they are not the most intriguing, or indeed the most detailed. Coincidentally or not, they are also not the most well-known. 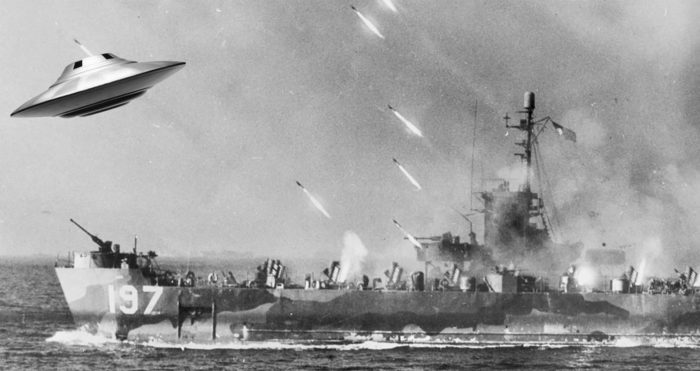 Artist’s impression of a UFO during WWII.

The “Motherships” Incidents of 1942 are perhaps a good example of such encounters. Such was the seriousness of the reports that the British Ministry of Defense would conduct their own investigation.

According to their report, the crew of a Lancaster bomber would see a “huge object” flying above them. They would estimate the size to be anywhere from two-hundred to three-hundred feet. Eight lights – each set in pairs – shone underneath the mammoth object. Given its apparent altitude, it appeared to be moving around five-hundred miles per hour.

Furthermore, the captain of the Lancaster would report seeing the same object several months earlier. The encounter happened again while on a bombing mission of German-occupied territory. On this occasion, it would fly underneath their position for several minutes before disappearing. Despite the official reports, the sightings are still a mystery.

Check out the video below. It is only brief but claims to show a UFO from a plane-camera in the Second World War.

While conducting “blind flying” exercises with a student pilot on 5th April 1943 (where the student literally places his head under a hood and relies solely on navigation equipment), pilot, Gerry Casey, would notice a bright flash of light coming from Santiago Mountain that overlooked Long Beach, California. As their plane continued over the blue Pacific Ocean below them, the flash suddenly became an object speeding towards them.

Casey would order his student to come out from under the hood. As he did, he witnessed a “strange wobble” affect the craft before it was suddenly at their side. The move occurred in what seemed no longer than second. Casey would later describe the craft to be “unlike any airplane I have ever seen!”

Still, in awe, Casey would reach for his camera. Just as he was about to snap the picture, he stopped himself. Suddenly, he entertained the notion that the craft may be a secret military vehicle. Believing he would land himself in trouble by taking unauthorized pictures of such a vehicle, he put his camera away.

The craft maintained its position alongside their plane for another thirty seconds, before making another strange “curved turn”. In a flash, the craft was disappearing over the ocean.

Upon landing, Casey and his student discussed the incident privately. They would both agree the estimated speed of the craft was somewhere close to 7000 mph. It also had no propeller or other visible means of propulsion.

Both also agreed the craft appeared to “wobble” or perform a “curving move”. This is an interesting observation. Some UFO researchers state that UFO propulsion involves the bending of space or even the atmosphere of planets. This gives the effect to those who see them that they appear and reappear instantly when in reality, it is bending one location to another. This is something we will look at in a future article.

Casey largely remained silent about the incident for some time. This was mainly due to his belief that he had witnessed secret military test planes. Maybe he did! However, as other UFO reports poured into the public arena following the war, Casey would eventually tell of his account. Due to the fact that there is no (known) military aircraft even today capable of what he saw, he would also openly entertain the idea of possible extra-terrestrial involvement.

The previous year, on the other side of Atlantic in 1944, Soviet pilots, Boris Surikov and his commander, Major Bajenov, had their own experience with a large and unrecognizable craft in the air. Perhaps making the incident even more pressured was the fact that the Soviet pilots were carrying a full bomb load.

On course to bomb oil refineries used by the Germans in Romania, the strange object joined them over south Ukraine. The effect on their plane was instant.

The oil pressure began to shoot instantly upwards, while the exterior began to shake violently. Whenever the pilots would get too close to the cockpit window they could also feel an electrical surge. All the while, the undetonated and fully loaded bombs sat ready to fulfill their purpose. These effects would continue even after the craft had vanished from sight.

Eventually, the pilots decided to jettison their bombs right where they were. They then, slowly (allowing for time) made their way back to their base. They would keep the incident to themselves, instead telling their superiors that they had dropped the payload on their targets. To admit abandoning their mission would likely have led the two pilots to military charges.

When the Hanford Engineering Works became operational, it was the first such Atomic plant of its kind. The materials – particularly plutonium – that it dealt with would be extremely dangerous if “in the wrong hands!” And with the end of the war still several weeks away in the summer of 1945 (when the atomic bombs were dropped over mainland Japan), the US Air Force had their squadrons on patrol and protect duty in the immediate vicinity of the plant.

Part of those squadrons was veteran pilot, Roland D. Powel, who would also train student pilots in the particulars of operating from aircraft carriers. One particular afternoon, the radar at nearby Pasco (sixty miles away) would serve notice of a large and fast object. What’s more, it was heading straight for the plant. Upon its arrival, it simply hovered over it.

Powel and several other pilots took to their Grumman F6F Hellcats in order to investigate this mysterious visitor. They soon had the vehicle in their sights, and estimated it to be “around the size of three aircraft carriers!” They also estimated its altitude to be over 65,000 feet, nearly 30,000 feet higher than their planes could go.

Ultimately, the squadron would return to base to await further orders. By the time they were on their ships, the object had risen directly upwards at lightning speed. It then vanished from the radar.

Check out the video below. It looks briefly at the UFO Cover-Up of World War Two. 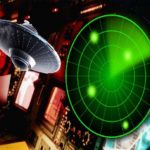 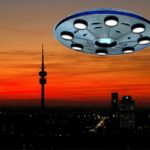