The 1982 Ota Airbase incident over the skies of Portugal would result in three experienced Airforce pilots coming face to face with a UFO. As opposed to covering up the incident, however, the Portuguese Air Force Chief of Staff would take the unusual decision to release all files to UFO investigators in an effort to clarify events. His reason for doing this is perhaps as interesting as the events themselves.

Artist’s impression of a UFO over OTA Airbase, Portugal.

There are UFO sightings all over Portugal, as there are in any other country. However, the area around Ota Air Force Base appears to have a cluster of such sightings over the years.

Might they have a connection to the air base in question? The country does have a long history of strange and unexplained sightings. Perhaps one of the more famous of these incidents occurred in 1917. 30,000 people would claim to see the “Sundance in the sky!” Was this merely a natural phenomenon, or might a UFO be responsible for the “miraculous” event?

You can check out the video below for a quick overview of that particular incident.

The morning of 2nd November 1982 would take a bizarre turn at around 10:50 am. [1] Pilot and flight instructor, Captain Julio Guerra, reported to ground control that a “strange object” hovered beneath him. Within seconds, the strange craft went from under his Chipmunk plane to directly in front of him.

The object was so close to Guerra’s plane that he could clearly see the make-up of it. He would later describe it as a round craft in two clear halves. These halves fit together like “two tight-fitting skullcaps!”

Between the two halves was a “grid” with flashing lights seemingly shining randomly. The bottom of the two halves appeared to have a dark center spot, possibly the craft’s propulsion system.

The object would circle and hover Guerra’s plane for close to fifteen minutes. It would move at an alarming pace, performing moves, not within the capabilities of any known craft.

Another Chipmunk arrived into the airspace, with both its occupants, Carlos Garces and Antonio Gomes, witnessing the craft themselves for around ten minutes. It continued to circle around the two planes, dashing in-between them at extraordinary speed.

Guerra made the decision he would intercept the object. Realizing that he would not be able to chase down the craft due to its superior speed, he instead headed for a spot where he anticipated it to be. He almost met the craft head on before it swerved upwards and came to a stop right above his plane.

Suddenly the object would shoot off from the scene at breathtaking speed. The pilots didn’t see the craft again.

Upon landing their planes at Ota Airbase, all three pilots would immediately make reports of their encounter. There was no initial follow-up until the Portuguese Air Force Chief of Staff became aware of the incident. He would take the unusual decision to invite independent UFO investigators to look into the incident. Not only that, he would make the military files unconditionally available to them.

Perhaps the reason for the ease the files would become available for investigators was due to the Portuguese Air Force Chief of Staff, General Jose Lemos Ferreira’s personal experience with such matters. He himself had witnessed a very similar craft, decades earlier when he was still a young squadron leader. What’s more, the sighting occurred in the same skies as the 1982 encounter – over Ota Air Force Base.

The incident would unfold on the evening of 4th September 1957. Leading his squadron of F84G Thunder Jets at around 9 pm, a strange, bright object came into view. Colors of red, blue, white and green all emanated from the craft.

All pilots were aware of the craft, and all would recall seeing smaller orb like objects leave the main body. After observing the scene for several minutes, he would lead his squadron back to base and file a report.

Although no further information or investigation happened following his report, he would not forget the incident. Indeed when the request for information and the release of the military’s files came to him, it was his own experience that was perhaps the driving factor in a move that was very much against the grain of normal military procedure.

Although there was complete cooperation from the military – at least from the air force – no satisfactory answer would present itself. Indeed, the only explanation from the wider military being that the pilots had merely witnessed a weather balloon.

All three pilots would refute this notion unreservedly.

According to their estimates, the craft had managed vertical speeds of close to 300 mph – not at all the kinds of speeds that a weather balloon could manage. When flying around the Chipmunk planes, those speeds were likely five times as fast, at around 1,500 mph. Again, these speeds are far from the capable movements of a weather balloon.

Officially the sighting remains unidentified, but that the craft is of intelligent design, at least according to the pilots, is beyond doubt.

The video below is worth checking out. It is in Portuguese, but it still gives a good visual explanation of events.

Many of Portugal’s UFO sightings appear to be concentrated towards the south of the country. Many of those are centered in and around the Lisbon area, and the Ota Air Force Base.

Perhaps one of the most intriguing sightings, although not strictly a UFO encounter, was the angel hair incident in Evora in 1959. On 12th November the town’s residents awoke to find a strange white cobweb-like substance around the town. Analysis of the substance would suggest it was the product of a “single-cell organism”. Others firmly believe the strange substance to be the result of ionized air – possibly the result of UFO activity in the region.

Incidentally, Evora is just over one-hundred miles east of Ota Air Force Base. Check out the video below which looks at this particular incident.

Although it happened around two-hundred miles to the north of the Ota Air Force Base, an incident in the autumn of 1990, also remains unexplained. In the small town of Alfena, a group of school children on their way to class would spot a strange object overhead.

According to their reports, the object was saucer-shaped, with four beams hanging down. One witness would describe the object as being “like a turtle with legs!”

Some witnesses, extremely spooked by the sightings, began to throw rocks skyward toward the object. One resident, however, photojournalist, Manuel Gomes, managed to take four clear pictures of the craft. It looked exactly as witnesses had described. Incidentally, all four pictures have verification as being authentic. 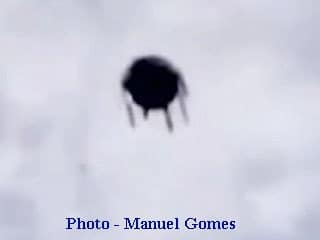 The object remained over the town, observing for an hour before it sped off upwards and out of sight. It remains unexplained and unidentified.

Check out the video below which looks at the strange sighting.