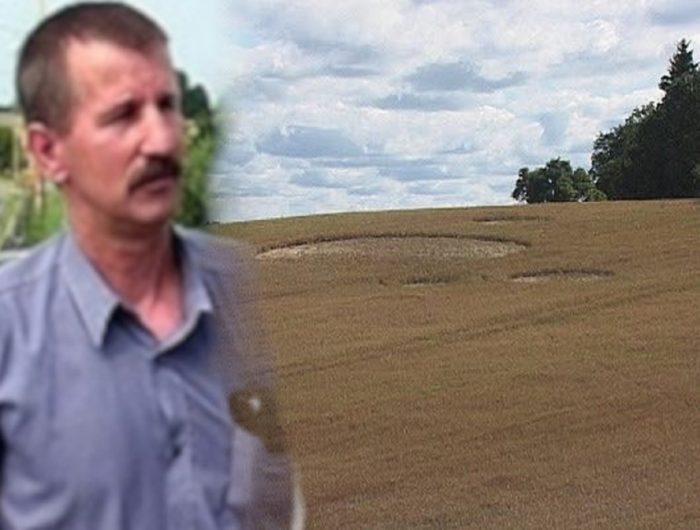 Not only did Lech Chacinski claim to be witness to three alien humanoids in the summer of 2003, but to an incident that also left crop markings in a nearby field. Events would unfold early one morning before dawn as the witness – a truck driver – was making his way to work. And while there is no obvious suggestion of anything ominous about the encounter, the witness would later recall the surreal nature of the meeting.

It is an interesting account. And one that contains very similar details to an abundance of close contact encounters from the early years of UFO sightings across the globe in the 1950s and 1960s. As we will look at shortly, this should force us to question the apparent presence of these extraterrestrial visitors and what they might be in reality. Indeed, such encounters make us question that very reality, that surrounds us all but is so little understood.

The encounter entered the wider public arena in 2004 thanks to the HBCCUFO research group headed by the veteran researcher, Brian Vike, who himself obtained the report from Polish investigator, Tomek Wierszalowicz. Furthermore, Nancy Talbot of the BLT Research Team would then conduct further investigations and research into the incident in late 2006 and early 2007.

Figures In The Road That Were “Disturbingly Extraordinary!”

In the early hours of 11th August 2003, at around 4:20 am, Lech Chacinski was making his way along the still quiet roads on his way to work. Just outside Szczecinek, he would find himself approaching a bridge. Before he could get there, however, a strange figure suddenly appeared in the road.

As Chacinski focused in on the figure a little closer, he could see that its hand was raised, almost as if in greeting. And what’s more, two other men stood behind, with one to either side of him.

The truck driver would bring his car to a stop, all the while keeping his focus on the strange men in the middle of the road. Not least as they wore something akin to an astronaut suit. However, as the mysterious figure approached, he realized there was something “disturbingly extraordinary” to them that he couldn’t quite describe. 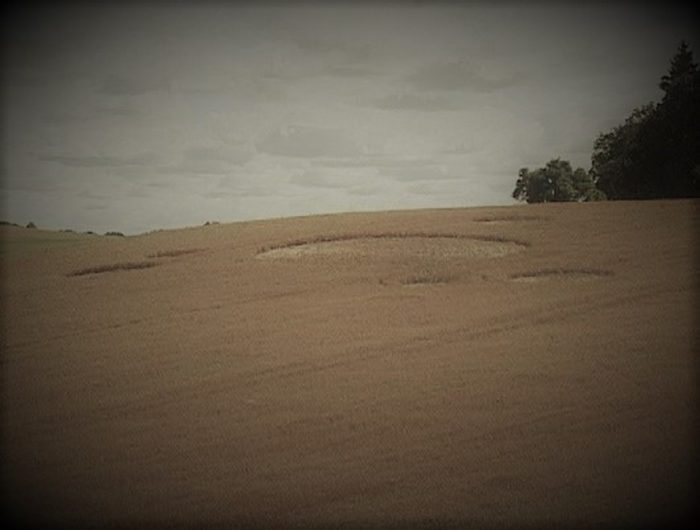 A picture of the field with strange depressions

He would further state that the figures appeared human in almost every way. They were of standard adult height, with a head, two arms and two legs with everything where you would expect it to be.

Their attire was distinctly shiny, with the appearance of a “dull, silvery, elastic foil”, while each figure also had on a helmet with a black visor where the face and eyes would be. Their clothing had a puffed-out look to it, almost as if it was providing some kind of protection from the inside for the person who was wearing it.

On the torso area of the clothing was a rectangular section that had “7 lights in each row” which flashed different colors constantly. On their backs, again very similar to modern-day astronauts, was some kind of backpack device.

The figure approached the car and peered in through the side window. Chacinski could see, through the dark visor on the figure’s helmet, “two round black eyes” looking in at him. So disturbing were they, that the truck driver went to restart his car and vacate the area as quickly as possible. However, before he could do so, a “beam of light” appeared on top of the humanoid’s helmet and shot forward to Chacinski.

The next thing he knew, he waking several minutes later. This time, though, he could hear the strange figure’s voice inside his head.

Upon waking, Chacinski noted that he felt a distinct feeling of calm running through him. What’s more, the voice, after assuring the previously frightened motorist that he should not be afraid, asked if he could hear them. To this, without speaking out loud, Chacinski replied that he could. 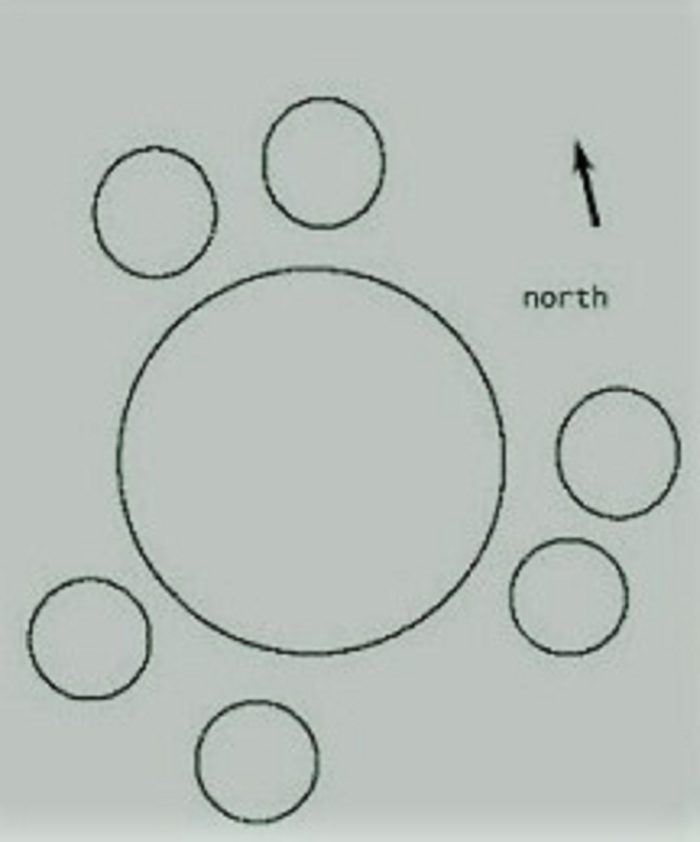 A witness sketch of the markings

The figure would then proceed to ask the witness about his vehicle. In particular “what material” it was made from, as well as questions concerning the fuel and “how it works”. Chacinski would state that he sensed “great surprise” when he relayed the information they requested.

Interestingly, they would further offer warnings regarding our collective need to respect nature, as well as to better protect the planet. Should we not manage to achieve this, there would be “catastrophic” consequences. This is something that comes up in many similar humanoid encounter claims. Should we take it as a detail of credence? Or, as we have asked before, does it show a personal agenda hidden within an apparent extraterrestrial encounter?

Chacinski did manage to ask the humanoids where they came from, to which they replied, “Eight Galaxy”.

Following the telepathic exchange, the three humanoids then began to hover several meters above the ground before they “floated” away from the road and toward a huge disc-like object. Chacinski wasn’t sure if the metallic craft had been there all along or if it had just appeared.

He would estimate it was around 1,000 feet away from his vehicle and was approximately 150 feet wide. He would also recall several rows of windows along the upper section of the craft. On the top, seemingly in the center, was an “opaque chamber”.

The three figures were now directly underneath the craft. As Chacinski looked on, a “very bright blue-white light” suddenly emerged from the underside of the disc. Amazed, the witness watched as this strange light “took the three beings up” into the strange object. Almost immediately, the light went out and in its place was a “colored smoke”. This appeared to wrap itself around the entire vehicle. 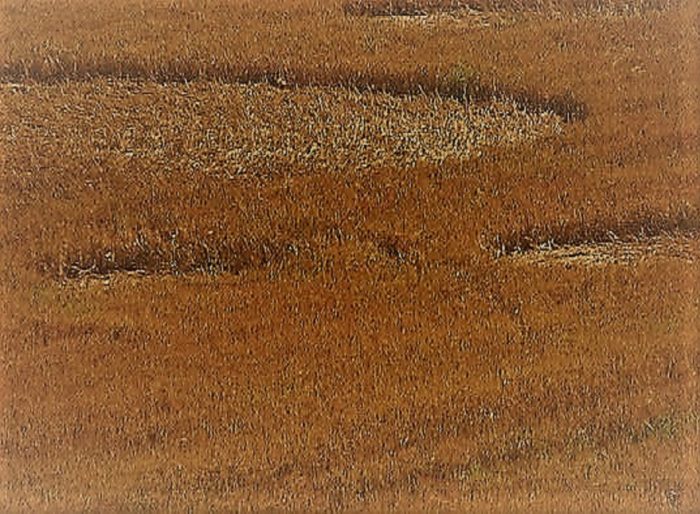 A close-up of the depressions in the field

The craft began to rise to a distance of around 100 to 150 feet in the air. It then moved along the course of the ground for several seconds. As it did so, the strange colored smoke followed with it. Then, after stopping briefly for a moment, the craft made a slight buzzing or hissing sound. It then disappeared upwards into the early morning sky.

It was then that Chacinski turned toward the field where the object had previously been resting. He could clearly see the outline of the underside of the otherworldly vehicle. Upon making a report of the incident, several photographs were taken of the indentions. A hoax perhaps can’t be completely ruled out (at least at this stage). The case, though, and the evidence left behind, appear to be genuine and credible.

What’s more, many who investigated the case or interviewed Chacinski would come away believing his honesty over the matter.

Were these strange figures alien visitors from another world? After all, they did claim to be from “Eight Galaxy” which would suggest so. Or might they be something completely different, here only under the guise of extraterrestrials? If so, who, or what would be behind such trickery? And for what purpose?

And of course, we must also consider the possibility that these aliens are, in fact, an unknown indigenous civilization. Possibly one that resides in the outer regions of the planet, or even inside the Earth itself.

Might it be, if we consider the “personal agenda” perspective for a moment, and take away the possibility that the account was a hoax, that the “aliens” may have been nothing more than human beings? Albeit, human beings with advanced and unknown technology? And again, for what purpose would this be? It is certainly something to think about.

As are the markings on the ground following the incident.

The connection to crop circles is also perhaps of particular intrigue. The two have by and large always been linked. However, many contemporary researchers have begun to suggest other, non-alien or UFO-related explanations to these bizarre and sudden appearances. And they might well be right to do so. Perhaps the often-complex mathematics and equations we find within them do suggest something extremely complex to decipher. And certainly something more than a nuts-and-bolts vehicle physically landing on them.

However, the Chacinski case, with the (by comparison) simplistic circular indentions, if we accept his claims for a moment, do suggest a physical landing of a metallic, heavy vehicle being responsible for them.

Once more, this case and others like it add yet more layers on to the already complex and maze-like nature of the UFO and alien question. And gives us more suggestions and possibilities to think about. At the same time, it offers details found in numerous other cases. Some of which date back to the early years of the Modern UFO era.

Again, we have to ask, if these are the same entities across half a century, is their presence one that has simply lasted that long? Or might they be traversing time as well as space?

The video below looks at some of the best footage of UFO sightings in Poland. 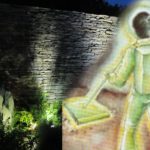