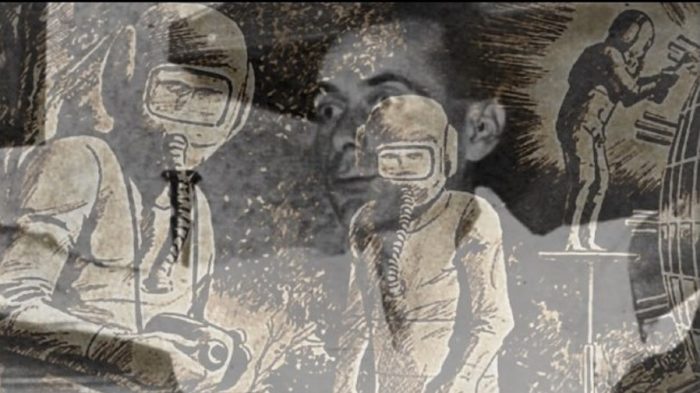 The encounter of factory worker, Bruno Facchini in April 1950 is one of Italy’s most intriguing UFO encounters and one that occurred just prior to several waves of UFO sightings that would last until the world wide panic of 1954. The incident has been the subject of several investigations by some of the most respected UFO researchers of their respective times.

Aside from the credibility of the witness over many years, as well as the physical evidence at the scene itself, it is perhaps some of the finer details innocently offered by Facchini that are of most interest. Many of them would appear in numerous, similar accounts over the years. And it is highly unlikely that any of the witnesses in these future incidents would have been at all aware of Facchini’s account. Many of these encounters with corresponding details and descriptions occurred years after Facchini’s encounter, and years before the Internet made the spread of news as instant as we enjoy it today.

A Break In The Storm

Many accounts state that forty-year-old factory worker, Bruno Facchini was working the night-shift and had decided to go outside for a cigarette break. This, however, appears to be a detail that has either been altered for effect or was simply translated incorrectly. Many newspaper reports at the time, as well as respected UFO researcher, Jacques Vallee’s investigation reveal that Facchini was, in fact, at home on the evening of 24th April 1950 and had gone out to use the outside toilet, which at the time was the only one available in the new house he shared with his wife and his young son.

It was a little after 10 pm and the heavy rain from a recent thunderstorm had only recently ceased. He reached the outside toilet, and after using the facilities he smoked a cigarette before setting off back down the garden path to the property. It was then that he first noticed strange flashes. He at first believed they were part of the storm, but then realized they were coming from a field opposite their house.

Thinking that maybe a power line had been damaged in the storm, he decided to make his way over to the flashes and get a closer look. As he got nearer, the lights stopped. He paused and waited for several moments before deciding to turn back. Then, however, just before he turned away, the flashing began again. He stepped forward, fully expecting to find a damaged power cable that he would have to report to the police.

What he saw was not a damaged cable, however. Instead, around 200 yards in front of him, was a “huge dark shape, like a ball, with a flattened top”.

Repairs To A Top-Secret Aircraft?

He would later estimate that the dark object was around thirty feet high and around twenty feet across. A green glow illuminated a set of ladders which stretched to the ground below. It was then that he could make out the shape of what he at first thought to be a man – an American airman perhaps. He was wearing a heavy-duty type suit. A kind that years later, when interviewed about the case, Facchini likened to those worn by the Apollo astronauts on the moon missions.

It looked to Facchini that the “man” was welding something. Perhaps he was performing repairs on a highly-advanced and top-secret aerial vehicle. He would soon, however, get a closer look, and would realize whatever the object was, it wasn’t a US military vehicle. It wasn’t anything terrestrial at all. And neither, for that matter, were its apparent crew.

A door would open along the side of the mysterious craft, a secondary glow emerging from inside providing more light. From the brief glimpse he got of the interior, he could see “another ladder leading to a higher level”. He could also make out “bottles connected together in rows” while in between them were “gauges and tubes”.

A little unnerved but awash with curiosity, he cautiously stepped forward. 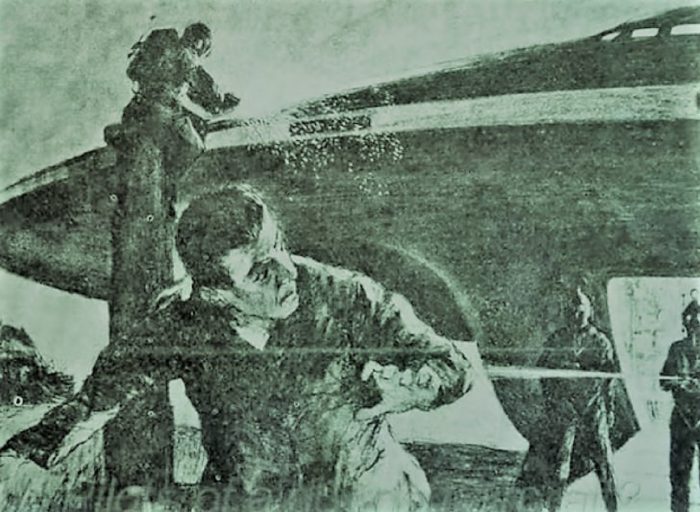 A Glimpse Of The Interior

He could see two different figures now. Each moved around the craft with slow and clumsy movements. Again, years later, after seeing the footage of the moon landings, Facchini would liken how the astronauts moved to how these strange creatures were moving now. At the time he would state “I guessed their suit was heavy and slowed down their movements”.

He could make out a pipe that one of the figures was attending to with an unknown device. Every now and then a shower of metallic sparks would fly into the air creating the flashes that had first alerted him to the strange activity now unfolding before him. As his angle changed, the more detail of the interior he could take in. He could see many dials and cylinders along the walls.

The closer he got, the warmer the surrounding air felt against him. In fact, it was unusually warm as if he were stood near something pumping out steam. He also became aware of an uncomfortable buzzing sound like a “giant beehive”. The sound was constant and is of particular interest as it is another of the seemingly insignificant details that seem to crop up in many close-contact UFO encounters.

He could see several figures moving around under the craft. Still thinking they might be American servicemen, he stepped a little closer.

He noticed that each figure had a helmet with a dark mask or visor in place. From this, came a large flexible pipe that he assumed went to an oxygen tank. Perhaps, he thought, the storm had caused the craft to make an emergency landing for repairs. Thinking he might be able to help he stepped forward until he was within only feet of the scene. It was then he realized they weren’t American or any other country’s air pilots. They weren’t human at all.

He heard “guttural language” coming from the figures. He also noticed how they moved stiffly and made “strange gestures”. When one of these gestures was made towards him he realized they were aware of his presence. Although one part of him reasoned they may wish to take him on board, the other part went into complete fright. He turned and ran as fast as he could.

However, as he did so, he could see out of the corner of his eye that one of the figures was pointing something in his direction. A sudden bright beam filled his vision. The next thing he knew he felt as though he was “cut in two parts by some cutting tool”. He fell to the ground. He was still in one piece, but with a “burning sensation” running around his torso.

Facchini managed to view the subsequent events without having to move from his position on the ground. The figures continued with their repairs for several minutes before returning inside the craft. The door on the side shut, cutting off the light that had been pouring out of it. The buzzing sound grew louder and the craft suddenly “took off, gained speed, and disappeared”.

He would later state that, despite the bright beam forcing him to the ground, the figures appeared “not to be interested in me anymore”. It was Facchini’s belief that they merely wished to scare him away from the scene. His fear, was more a fear of the unknown as opposed to a feeling of being in danger. He would remain on the ground, however, for several minutes after the silence took over. Then, sure the strange visitors had left, he got to his feet and returned home. He wouldn’t sleep well, if at all that night.

He would return to the site the following day. Partly out of curiosity, but also due to having lost his cigarette box which he believed he dropped when he was hit with the beam. Once there, he noticed four distinct “circular impressions” arranged in a distinct pattern. It was also clearly visible that the grass had considerable burn markings. And furthermore, numerous pieces of scrap and melted metal littered the ground. There was no doubt to Facchini, these were the remains of the repairs he had witnessed only hours earlier. 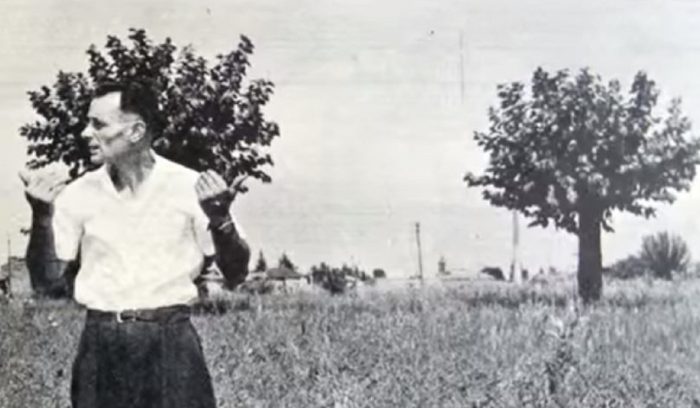 Material “Would Be Ideal In Space Flight!”

Facchini would make a report of the encounter to the police. Although they did attend the scene, reports suggest that they were far from enthusiastic about investigating the incident. They did send several pieces of the strange metal fragments for analysis, though. The results, while inconclusive as to exactly what they were, would state them to be a heat-resistant, anti-friction metal. More interestingly they would also offer the material “would be ideal in space flight to face the burn-up as the craft entered the Earth’s atmosphere”. A secondary examination of the materials a year later would state that the main composition was bronze with traces of lead.

Facchini would also see a doctor about persistent back pain following the encounter. Upon examination, a black mark – darker than a bruise – stretched across his entire back. It remained for several weeks.

Several UFO researchers investigated the incident over the years. To his credit, Facchini never once wavered from his version of events. That, as well as the recovered materials and the markings on the ground at the scene surely rank the encounter as one of the most credible on record.

One UFO researcher would remark to Facchini that he was “lucky” to have witnessed what he did, expressing his wish to have witnessed such an incident. To this, Facchini replied, “Lucky? Me?” If I had known how much trouble I would get from this experience, I would not have said one word about it. Guaranteed”.

The short video below goes over the basics of the incident. 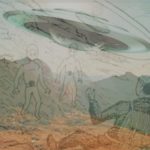 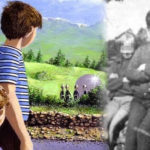 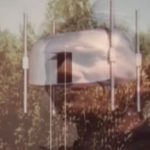