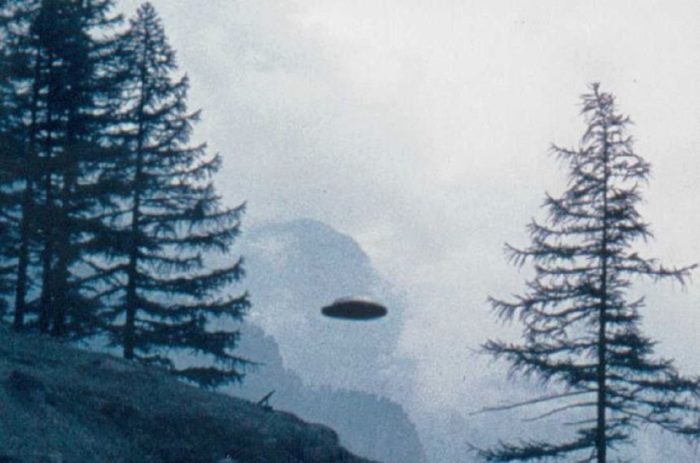 The Saas Fee Picture – A UFO Encounter In The Swiss Alps?

A UFO sighting from the mid-1970s near a small village in the serene environment of the Swiss Alps is one that continues to divide opinion within the UFO community. And it is easy to see why. On the one hand the “flying saucer” appears to be nothing more than a typical example of the many faked photographs that had been in circulation for decades. On the other, the main witnesses have remained to their original account despite repeated interviews and investigations. What’s more, there was a potential corroborative sighting several miles away at around the same time.

Close-up of the Saas-Fee UFO picture

In the years that followed the incident there has been many examinations of the picture and several attempts to replicate it in order to sound the alarm to the fact that the picture was fake and the result of a hoax. However, despite reasonably strong arguments and limited success, considerable doubt remains.

The picture remains of interest to the UFO community. Did the three hikers really capture a spacecraft from another world? And if they did create the picture themselves, whether for financial gain or notoriety, surely one of them would have revealed the truth by now, almost half a century later.

A Two-Day Hike In The Swiss Alps

The 26th July 1975 had started normally for the three witnesses, two brothers known as B and H, and their friend M, all from the Netherlands, who were on the second day of a two-day hike in the Swiss Alps. [1] At around 3 pm, as they neared the small village of Zwischbergen, each was preparing to begin the final part of the long trek through the region.

However, before they could move on each of the men noticed a bizarre sight in front of them. In the skies over the mountains ahead of them was a “circular object”. What’s more, as opposed to being some kind of optical illusion it very much appeared to be made of a solid, metallic exterior that had a dull grey color to it. Furthermore, they would estimate it was at least 15 meters across and was around 100 to 500 meters away from them. It appeared that the object was hovering over the nearby village. 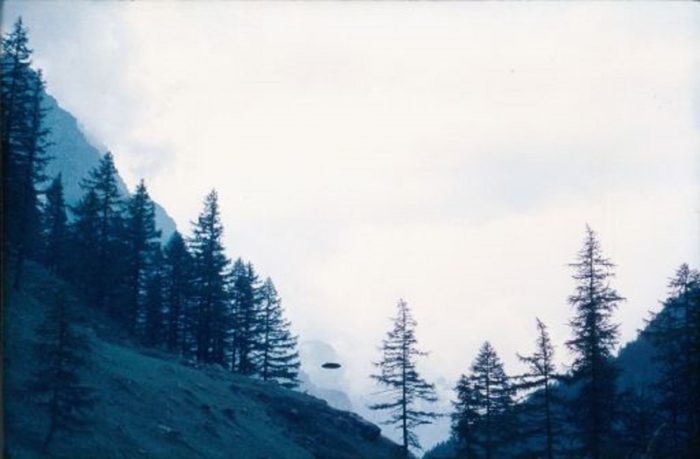 The trio continued to watch the object for several more moments before B finally reached for his camera. He pointed it in the direction of the bizarre craft and pressed down on the shutter button. Almost as soon as he had done so, the object suddenly moved. Before he could raise the camera again, it had vanished behind the trees.

This is perhaps an intriguing detail that comes up in other accounts involving strange objects that have been photographed by witnesses. Many such incidents involve the object vacating the area almost as soon as the picture is taken. Whether this is coincidence or not is up for discussion, but it would certainly suggest an awareness on the occupants’ part.

Obviously fascinated by what they had seen, the hikers went on with their hike.

Back in the Netherlands, the witnesses would quickly seek out a mutual friend to whom they would show the picture. The friend was heavily involved with a UFO research and investigative group active at the time. In fact, because of the high-profile nature of the organization the picture – known as the “Saas Fee” photo due to the ski resort of the same name being close by – would receive national and then international attention.

As we might imagine, theories and opinions would differ greatly from investigator to investigator. However, at least initially, many people were impressed with the picture and deemed it very credible.

We should perhaps also note the apparent words of praise for the picture’s authenticity by Allen Hynek of Project Blue Book fame. He would state that the picture was one of the best and most credible to be captured. 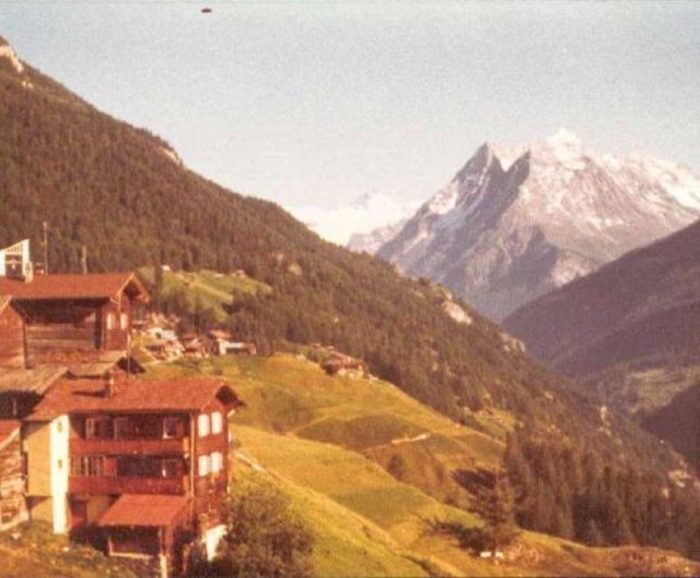 What’s more, two years after the picture was taken in 1977, William H Spaulding would oversee a high-tech (at the time) computerized analysis of the picture. He would offer that it appeared that the object was between “25-30 feet diameter”. Furthermore, it also appeared to be “removing some of the fog/haze as it moved toward the camera”.

Even further enhancing the case’s credibility were the claims that surfaced in 1983. According to several Belgian tourists who were staying in the small village of Eison around 30 miles from where the hikers captured the picture, they too would witness a strange object overhead. What’s more, they managed to also capture a picture of it. It would later come to light that this second picture was taken around 4 pm – an hour after the hikers had taken theirs. Does this discount the second picture? Or might it suggest that the object had simply journeyed to this location?

Signs Of A Hoax?

Numerous studies would take place from various groups and organizations over the years after the incident. Perhaps one of the best was done by the Belgian research group, CAELESTIA in the early 1990s.

It would become the group’s suspicion that the picture was indeed a fake. They would point to the fact that the original analysis was not performed on the actual original slide, but on a copy of a copy. This, while not suggesting fraud on the photographer’s part, would case doubt on the accuracy of the analysis itself.

However, when investigators looked through other slides from the batch that contained the UFO picture, they discovered that the three leading up to the picture itself were missing. This, as the report states, created a “suspicion that they were removed because they showed less successful attempts to create a UFO shot”.

What’s more, when attempts were made to replicate the picture – essentially to create a fake UFO picture themselves – they had, albeit limited results, by using an aluminum camping plate. What is perhaps interesting here is that the campers would have perhaps had just such plates with them as they were in the middle of a hike.

It was also noted that there appeared to be a lack of aerial perspective to the object, particularly the “dark coloration of the bottom side” of the craft. It was now suspected that the object was perhaps “small and close to the camera” as opposed to being multiple feet wide and several hundred yards away, at least.

There was also the realization that the three men had apparently witnessed a strange light in the sky overhead before setting off on their two-day hiking holiday, a light they had referred to as a UFO. Had this given them the idea to set up a picture of just such an object? As we mentioned previously, these kinds of pictures were relatively prevalent in various newspapers at the time of the Saas Fee picture was taken. 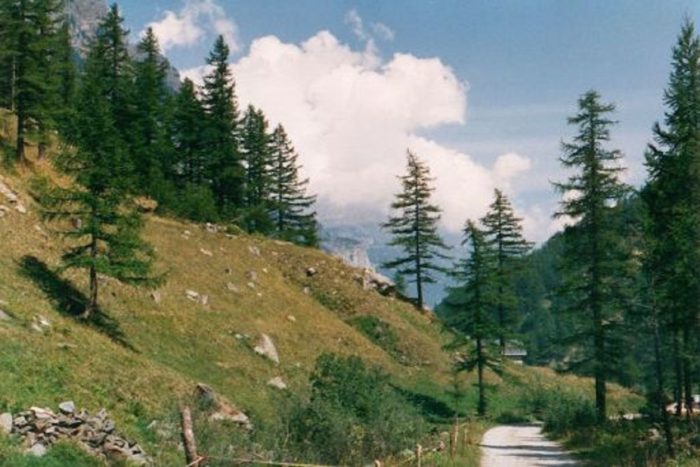 The Swiss mountains and woodland

Investigators would also learn that on the same day that the picture was taken, earlier in the day, they had taken several “joke” photographs, including one of a rock with “clothes” on a bizarre smile on its face. Is this a further indication that perpetuating a hoax was very much in the witness’s mindset?

Furthermore, given the close proximity to the ski resort, as well as the residents of the village over which it hovered, there were seemingly no further witnesses to the events, at least none that were willing to come forward. This, despite the fact it occurred in the middle of the afternoon.

A Case Too Close To Call

Was the Saas Fee photo nothing more than just a hoax of three Dutch hikers? Or might the picture remain one of the best examples of proof of an unknown, unconventional aircraft, perhaps from another world?

The ultimate findings of the CAELESTIA investigation were that although it was not beyond doubt that the picture was indeed a hoax, the photo could not be accepted as a genuine, fully credible capture of an otherworldly craft with further corroborating evidence.

The organization themselves note the “apparent sincerity” of the two brothers (the third friend moved to New Zealand in 1983). Not only were they calm throughout lengthy interviews by the group, but they also offered further pictures and information that they had not divulged in public.

As with most cases of this nature, especially those that can be argued so convincingly one way or another, only an admission or a further piece of supporting evidence will break the apparent deadlock on the truth to just what did happen that summers afternoon in 1975. Until that day arrives, it is up to each of us to make up our own minds as to the real nature of the Saas Fee picture.

Check out the video below. It looks at some of the best UFO photographs. 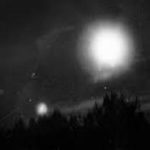