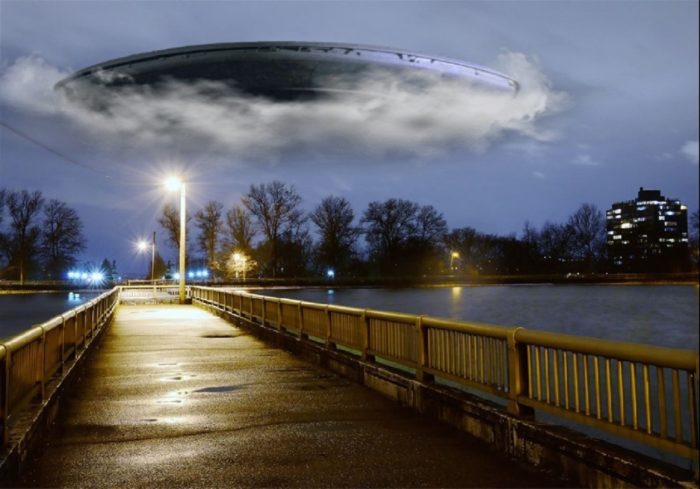 On the evening of 1st March 1978, a construction worker, along with his girlfriend, would witness a strange object descend over the Highland Reservoir in Pittsburgh, Pennsylvania. Little did they know, a director of the Buhl Planetarium, who was at his office late, would also witness the event. Further still, an appeal for witnesses would result in an abundance of calls to a local phone line set up to specially handle them. Many of them would describe the same object, in the same location, and at the same time. Almost thirty separate sightings would be reported as a result of the serious-minded appeal to the public.

The appeal and subsequent investigation would be carried out by the Pennsylvania Center for UFO Research, who were previously known as the Westmoreland County UFO Study Group. Their coordinated and inclusive approach would prove extremely successful in bringing out genuine details and not those who wished to sensationalize what they had read in the paper. With this in mind, the group successfully persuaded the Pittsburgh Post-Gazette to withhold details of the sighting until the public could be asked to phone anything unusual they might have seen. While it is a little-known account outside of the Keystone State, it is, at the very least, an example of how future UFO events might be coordinated.

“What Will We Do If It Lands?”

It was a little after 10:15 pm when 22-year-old construction worker, Glenn Ricci, and his girlfriend, Claire Gallery, were driving in the North Hills area of Pittsburgh. They were near to the O’Hara Township Municipal Building when a strange object suddenly became visible in the night sky. Ricci would bring the vehicle to a stop and the pair watched the craft for two or three minutes. The couple would agree that the object was “very bright. Much brighter than a star”.

As they watched in fascination a second object suddenly appeared. This one, Ricci would describe as “incredibly fast. Much faster than a plane”. As the pair followed this second object it suddenly turned in an extremely abrupt fashion, putting it on a collision course with the first object. Both objects would then disappear out of sight towards Highland Park. Ricci immediately put the car in motion and headed in the direction of this bizarre aerial anomaly.

After initially losing sight of the oval-shaped craft, it suddenly reappeared. This time, it was at a much higher altitude. It was, though, very definitely descending, heading towards the Highland Reservoir. It would come to a rest and hover over the reservoir, with the object dwarfing it from above at a distance of around 2,000 feet. On the underside were three triangular lights, while at each end there were two red lights.

Turning to Ricci, Claire asked, “What will we do if it lands?” 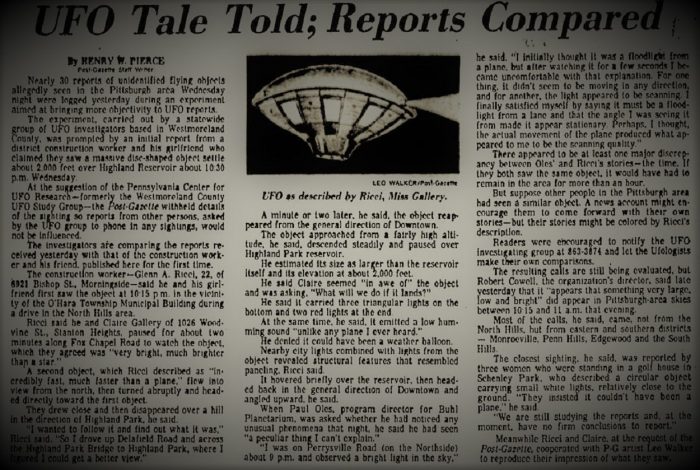 A newspaper article on the sighting

“A Peculiar Thing I Can’t Explain!”

By this time, Ricci had brought the car to a stop once again. The pair could hear a strange humming noise. A sound that Ricci would later describe as “unlike any plane I ever heard”. As he continued to look upwards he would take in as much detail as the surrounding lights would allow. One particular detail he did recall was of distinct “paneling” on the exterior of the object.

After a moment or two, the object began moving away once again. As it did so, it began an ascent on an angled trajectory. It would head back almost exactly in the direction that it came.

Little did the pair realize, only slightly earlier, at a little after 9 pm, Paul Oles, the program director of Buhl Planetarium would respond when asked if he had witnessed anything strange that evening that indeed he had seen “a peculiar thing I can’t explain”. He would elaborate that he witnessed a “bright light in the sky” that he first believed to be a spot-light of a helicopter. However, he would state it “appeared to be scanning” the area below.

Following reports filtering through to the aforementioned Pennsylvania UFO group, they would work with the local press to ask residents to phone in their sightings. They did. And most of them were remarkably similar to each other. The director of the organization, Robert Cowell would conclude that “something very large, low and bright” was in the skies over Pittsburgh on the evening in question.

The sighting closest to the location would come from three women who were at Schenley Park in a golf house. They were each insistent that the object simply “couldn’t have been a plane”. They would describe a circular-shaped object with “small white lights” on it hovering close to the ground.

A Plethora Of Pennsylvania UFO Sightings

There were a number of sightings over the following weeks in the state of Pennsylvania. While on their own, each appears rather insignificant. However, coupled together, and then further linked to the sighting over the Highland Reservoir, perhaps these “isolated” encounters were anything but.

For example, in Penn Hills Township on 1st March, came a report of a fast-moving object from an anonymous male witness. On the same evening in Etna, multiple witnesses would report an object with an almost identical description. At a little after 7 pm on 8th March in Oil City, three people would report a “hovering object” for several moments. Incidentally, the weather during the incident was particularly cloudy. On consecutive nights on 30th and 31st March in Strinestown and York respectively “nocturnal lights” were observed by several people.

Also in Strinestown two days later on 2nd April, a distinctly “round object with body lights” would hover at low altitude in front of a car. The witness would report a “pulsating sound” and perhaps even more alarming, a “beam of light” which shined down on the vehicle. On the same evening in Strinestown, another witness would report an object that not only had a strange appearance but moved with capabilities not previously seen. A further witness, named as “Mrs. N. Smith”, would describe a round object overhead which made a “pulsating sound”.

A further similar object was reported in the town of Red Lion in early-April. It moved in the sky unlike any known aircraft. 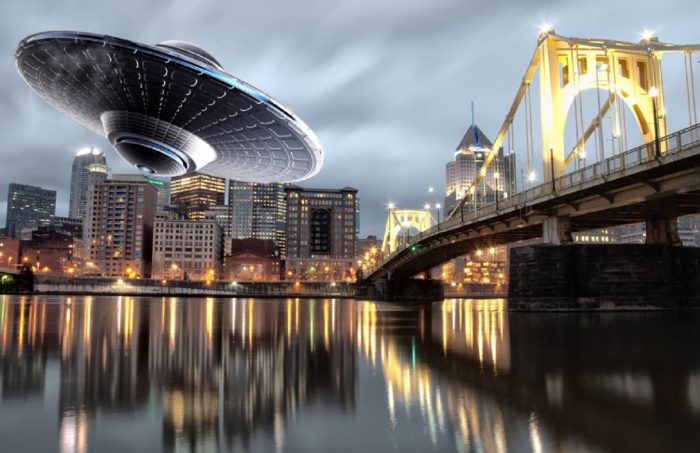 A depiction of a UFO over a river in Pittsburgh

Just under a year earlier on the evening of 29th March 1977, just over a hundred miles east of the Steel City in Morgan Run, a similar sighting had occurred. While sat in his mobile home, 45-year-old Burton Woods noticed a strange craft hovering in the skies nearby. Woods would immediately grab his Kodak Instamatic camera, as well as a pencil and paper.

As he pointed the camera upwards, snapping a picture as best he could under the sudden pressure of the situation, he noticed a soft green glow coming from the underside of the craft. He quickly took another picture before discarding the camera momentarily, so he could quickly sketch the scene before him. He walked forward steadily towards the craft as he did so. In total, he would manage to compose three separate sketches.

He also managed to get to within only a few feet of the object before it began to move away, eventually vanishing out of sight. He would later describe the craft as around 200 feet in length. UFO investigators would interview residents of the town. Several would claim to have seen strange lights in the sky on the night in question. Due to the late hour (close to midnight), many residents, however, were already in bed.

Incidentally, Woods would suffer from blurred vision and intense headaches in the months following the incident. This is a similar aftereffect reported by a considerable number of people involved in such close-contact encounters.

Whether there is a connection or not, in October 2002, another sighting over the skies of Pennsylvania would result in a photograph. And what’s more, details of the sighting would echo several of those from those of the late-1970s. 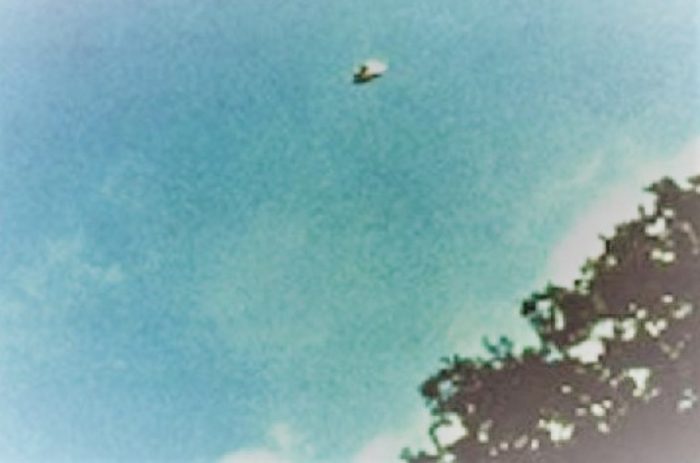 Following an afternoon hiking in the woods on Ice Mountain near to Tyrone, the unnamed witness was walking back towards his car when he suddenly noticed a bright light overhead. What’s more, the bright light was moving towards him. He at first believed the light to be nothing more than an airplane. That was until it stopped dead and hovered in the sky, “pulsating” as it did so. As it went brighter and dimmer the witness would report seeing and orange-red “faint haze” around the object.

As the pulsation increased the witness would report that it appeared to “flicker” as he watched. He would continue to watch until a sudden “very bright blue-white light” emerged from the bottom of the craft. The light would travel directly down to the ground below. The witness would stress that “this was no searchlight”. And furthermore, it was “a tight, bright beam from top to bottom”.

Then, the pulsating ceased, and the beam of light disappeared. The object, however, remained, hovering. The witness managed to take two pictures of the craft. However, as he went to take a third one, it “suddenly shot straight up in the air at fantastic speed. And was gone from sight”.

Following its disappearance, there was no further sound. And nothing at all, aside from his photographs to suggest it had even been there. He would state that he had “never seen anything like it before”. The sighting remains unexplained, just one of many in and around the Quaker State.

Check out the short video below. It looks at some of the most intriguing UFO sightings from Pennsylvania. 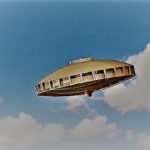 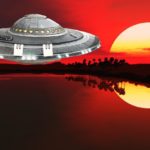