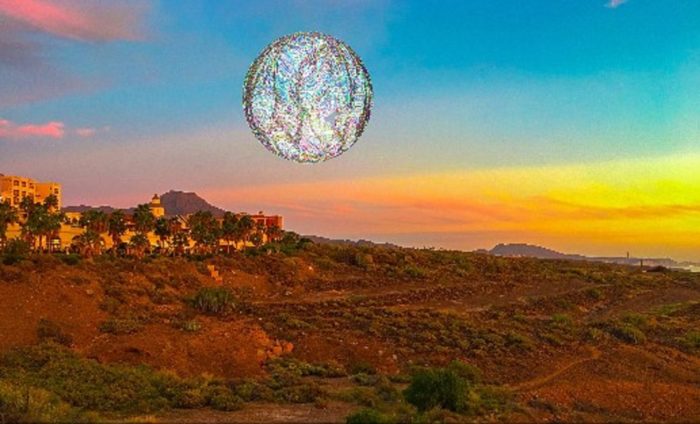 Not only is the 1976 sighting of a strange sphere over the Canary Islands one witnessed by multiple people, it is also one that firmly links extraterrestrials, or non-human life at the very least, with the sighting. Witnesses ranged from military servicemen, police officers and medical professionals, to the average tourist or resident of the area. In short, its credibility was sound.

A depiction of a sphere UFO over Canary Islands

The incident was documented in the immediate aftermath via a military investigation. However, it would fully come to light following the Spanish government’s decision to declassify their UFO files in 1994. It remains one of the most bizarre incidents in the recent history of the Canary Islands and could quite possibly be one of the most credible encounters in recent UFO history.

As we will look at later, in the opening years of the 2000s several UFO sightings surfaced which might suggest further activity in the region. One of the most recent, in fact, would evoke memories of the famous sighting of the mid-seventies.

On the evening of 22nd June 1976, residents of the Canary Islands (Tenerife, La Palma, and La Gomera) would see and report bizarre lights in the sky overhead. [1] The reports were likely in their hundreds, although newspaper headlines the following day suggested “thousands of people” had seen the bizarre display. The lights themselves performed maneuvers that known aircraft were simply not capable of. And furthermore, these movements were not of any known natural object. Perhaps the most intriguing reports, however, were those that claimed to have witnessed “aliens” within the strange crafts.

The Spanish Air Force would investigate the sightings and would send a basic report to journalist, J. J. Benitez. While Benitez would conduct his own extensive research, it wasn’t until the aforementioned releasing of military files in 1994 on the case that the full picture was available.

It would seem the Spanish naval vessel, the Atrevida, had been the first to raise the alarm of the strange lights. They would send a report from their position at 9:27 pm. They would state that “an intense yellowish-bluish light “was heading in their direction from the shore. It would suddenly become “stationary” before a “luminous beam from it began to rotate”.

After two minutes the beam disappeared and, in its place, “an intense great halo of yellowish-bluish light developed”. The object remained there for forty-minutes in full view of the entire crew. The naval report continues that “the light split into two parts” two minutes after the “great halo” first appeared. The smallest part would move to beneath the halo while the larger part would “climb in a spiral, rapid and irregular” way before vanishing.

All the while, the halo, remained in place.

Several minutes after this detailed account from the Atrevida, came sightings from civilians. And these reports came from all parts of the islands’ society, including “professionals” such as doctors and teachers, which, rightly or wrongly, always lends credence to such reports.

With no military or civilian aircraft airborne that evening, there should have been nothing in the sky. And even if a “private flyer” had made their way up unbeknown, they surely couldn’t be in possession of such a phenomenally futuristic craft.

The reports from residents began to separate themselves into two groups. There was the large object of intense yellow-blue light as seen by the crew of the Atrevida. And there were the sightings of the smaller, sphere-like object – which housed several alien entities. If these seemingly outlandish sightings of extraterrestrial-navigated orbs had come from one or two of the populace, then the military General who commissioned the investigation could have put them down to overactive imaginations. They didn’t, however. They came from multiple people, with the same descriptions and details. Several of them offer detail so precise they stand out from the others. 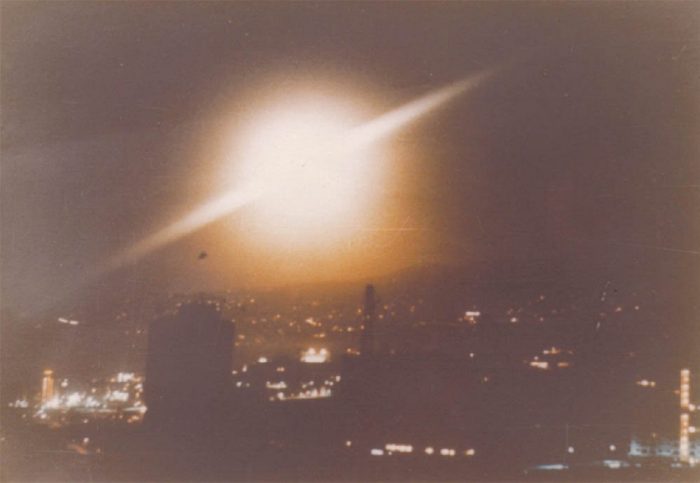 Picture from the night of 22nd June 1976, Canary Islands

The report of Dr. Francisco Padron Leon, for example, makes for fascinating reading. Dr. Leon, who lived in the city of Guia, claimed he was on his way, in a taxi cab, to an emergency house call in Las Rosas. As they drove along the road, the headlights of the taxi lit up a luminous spherical object ahead. They couldn’t tell if the object hovered just above, or rested on the ground, but that it was there is without a doubt.

As both men looked intently at the object, they could see it was made of “crystalline-like material” and was completely transparent. A blue color shined around the object and each man could see what looked like stars inside. In the middle of the inside of the craft was a control panel of sorts. It appeared to be made of shiny material similar to aluminum. On each side of this panel was two human figures dressed completely in red, and each between eight-to-ten feet tall.

The sphere then began to enlarge until it became the size of a “twenty-story house”. The control panel and the two humanoids, however, remained the same size. As it grew, it would rise up into the air. The home of the doctor’s house call was only yards away. Dr. Leon left the vehicle as the craft continued to rise, banging on the door and telling those inside to come out. They did, and they would see the sphere rising. It would begin to pick up speed. Eventually, at a blistering pace, it would shoot out of sight in the direction of Tenerife.

Events Are “True and Proven Fact!”

One of the members of the family inside the house awaiting the visit of Dr. Leon would claim that just before his knocks at the door, the television they were watching suddenly went blank. At the same time, the family’s dogs began to bark and growl nervously. When she looked outside, she would confirm the details offered by the doctor and the taxi driver. Including the presence of two humanoid figures inside the craft, and its sudden growth and disappearance.

There were several other sightings throughout 1976. None of them, however, matched the detail offered by Dr. Leon. Perhaps the words of the General who commissioned the report in the days following the wave of reports on 22nd June sum it up best. He would state:

“The fact that a very strange and peculiar aerial phenomena occurred on the night of 22 June is a true and proven fact, as incredible as its behavior and conditions may seem”. 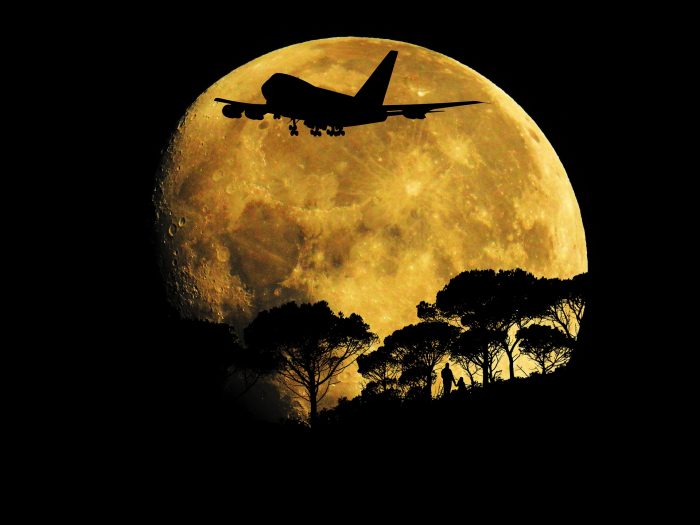 A Jumbo Jet flying across the moon

Sightings Over The Canary Islands In The 2000s

In the first decade of the 2000s, several UFO sightings were reported over the Canary Islands. In 2004, an Italian national employed in the area would claim he and his secretary witnessed a “luminous orange sphere” in the sky at a little after 6 pm in the evening. The object was visible for around a minute.

Two years later in the summer of 2006, over the island of Tenerife, several sightings were reported to a local newsroom of strange “static white lights”. At the same time, several residents would report electrical devices ranging from televisions to refrigerators suddenly breaking down. Authorities would state the lights and the electrical malfunctions were likely an unfortunate result of preparations for an upcoming royal visit.

In November 2008 in the Lanzarote, Puerto del Carmen region, a British husband and wife would witness two “yellow-orange lights” from the top patio of the villa they were staying in. The husband had spent considerable time in the RAF and knew the objects were nothing he had encountered previously. The lights would “dance in the sky” as they headed towards them. Then, with no warning, they turned away and went towards the island of Feuventura.

Several months later in March 2009, in the Playa Blanca area of Lanzarote, another holidaying couple witnessed a bright light, which they at first thought was a rescue helicopter, begin to “plummet” towards them. The couple were walking towards their hotel following dinner and it was a little after 8 pm. Suddenly, the object stopped slightly above them and held purposely still overhead. It then moved away from them at great speed, stopping at another location for a moment, before moving off again, and eventually out of sight.

Two incidents of the 2000s in this region, however, stand out.

Portals Over The Canary Islands?

On 9th September 2007, in the middle of the afternoon, two American ex-pats witnessed a UFO over the Canary Islands for almost four hours. The husband and wife were enjoying the afternoon in their garden when they would spot a “silvery object” in the sky. It appeared to be circling the area below it, but it bore no resemblance to a helicopter or an airplane.

When the witness looked at the object through binoculars he could see it “twisting and folding into itself” despite there being no wind. This, he felt, indicated the motion was of its own accord and power. When a second “bright oblong object” arrived seemingly out of nowhere, the ex-pat went to retrieve his camera from inside the house.

As he did, he turned his attention back to the sky for a moment. He could clearly see a triangular “window” as if it had been “ripped” in the atmosphere. He could even see a “rippling” area around the edges of this window. Suddenly, he noticed two bright oblong-shaped crafts enter the window and vanish. The couple would remain watching the sky for several hours. All the while these rectangular objects seemingly emerged from the area in question. As if it was a portal allowing access to and from the planet.

In 2015, a similar incident occurred. And what’s more, it would share similar details to a larger craft and a “smaller sphere” much the same as the 1976 incident. The disc-shaped object, in broad daylight, appeared to arrive via a strange portal in the sky. It then sent out a smaller spherical craft which moved independently of the larger object.