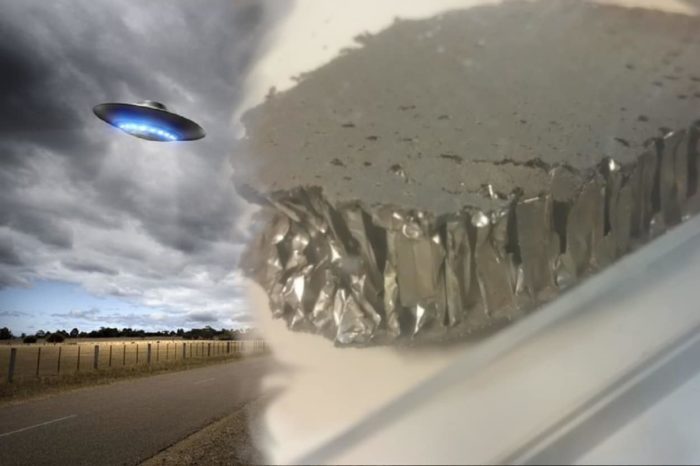 Sometimes referred to as “Europe’s Roswell”, an alleged crash in the small village of Llanilar near Aberystwyth in Wales in January 1983 is perhaps not as well as known as we might imagine. Especially as it boasts apparent proof of the incident in recovered material claimed to be from the otherworldly craft. Furthermore, according to the main witness, a local farmer, a discreet and professional “clean-up” operation took place on his land where the material was discovered.

Despite the apparent seismic shift in public perception that such an event would result in, only one newspaper would cover the story, and even then, the coverage would dry up almost instantly. Was this a purposeful decision due to an outside influence, similar to other claims we have examined before?

Whatever the truth behind the incident, the recovered material remains in the possession (in a secure location) of UFO researcher and investigator, Gary Rowe. Might it one day prove to be a vital piece of evidence in getting to the bottom of the UFO and alien question?

And will the full truth of what did happen in the small village in Wales that cold January in 1983 ever reach the public arena? Is the alleged crash near Aberystwyth really Europe’s Roswell?

A Very Strange Morning, Like “Something Out Of A James Bond Movie!”

One cold morning in January 1983, farmer Eurwel Evans discovered several large crumpled pieces of foil and metal on his land. [1] Upon closer inspection, the material appeared to be the exterior of a small plane or helicopter. Evans would immediately contact the police stating he suspected an aircraft had come down in one of his fields. Furthermore, he would reason to himself, the incident must have happened during the early hours as the fields were clear of such debris the night before.

The Royal Air Force (RAF) would send an investigation team to speak with Evans. By this time, the farmer had made discoveries of “metallic debris” in a total of four of his fields. That something strange had taken place was obvious. Parts of the debris had a bizarre green-gray color to it, as well as a “honeycombed” appearance. 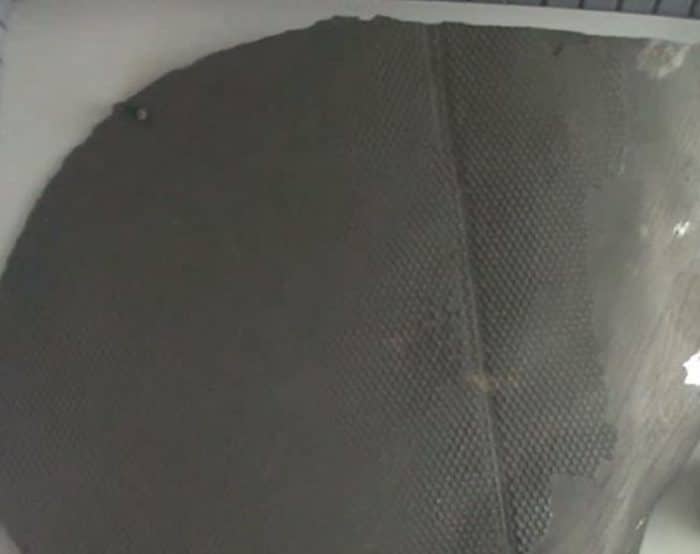 Interestingly, the unit would inform Evans that none of their military vehicles were missing. And furthermore, the material, whatever it was, didn’t appear to be from any aircraft that they were aware of.

However, shortly after the initial air force response team, a second unit arrived, and this one was much more aggressively thorough. What’s more, they contained both uniformed and non-uniformed officers, some of which would claim to be from the Ministry of Defence (MoD).

A cordon was erected immediately around the fields containing the wreckage. Even temporary floodlights were set up so the team could work well into the night. They would systematically remove every single piece of the wreckage, which would range from large pieces that required two people to lift to the tiniest fragments. Evans would later describe the incident as like “something out of a James Bond movie!”

Regardless of the size, the unit retrieved and confiscated every piece. All, that is, except for several small pieces which would come to light a little later.

Several weeks later the MoD would release an official statement regarding the incident. They would claim, once more, that no military aircraft were missing. And that furthermore, there was no military radar evidence of any other aircraft in the Aberystwyth region anywhere near the night in question. They would state that the material they had analyzed was “unidentified”. There was, however, little information of any kind of follow-up investigation or what might happen to the recovered material.

Perhaps suspiciously, only one newspaper would cover the incident and only a one-off story at that. In the 23rd January edition of The Express, a story under the headline:

Strange Debris Out Of The Sky!

Although the minimal coverage ended before it began, it was enough to bring the attention of the case to UFO researcher, Gary Rowe (from the video below). He would travel to the small village and to Evans’ farm in order to speak with the witness directly. With a small team of UFO investigators, they would search the fields hoping to find a piece of missed wreckage so they might do their own analysis.

Amazingly, their efforts were rewarded, as they found several pieces apparently missed by the MoD unit.

Before we move on, check out the video below. While the whole interview is indeed very interesting, the last eight minutes or so are of interest to us here. From just before the 1-hour mark they begin speaking of and then examining the apparent wreckage from the UFO crash we are about to look at.

It’s Not Normal “But That Is What They Told Me To Say!”

With the wreckage secured, Rowe would go about having samples sent for testing. As we might expect, the results were a little more inclusive than the military’s findings. They too would fail to identify the material. However, they would claim it had very similar properties to duralumin, a lightweight but strong material used in aircraft.

Furthermore, the green-gray material was, in fact, a paint-like substance which remains unidentified.

When Rowe looked to return to the farm and investigate further, however, even more suspicious activity was taking place. Evans would inform him that the area of trees he wished to investigate was off-limits. It was now under the control of the Forestry Commission. 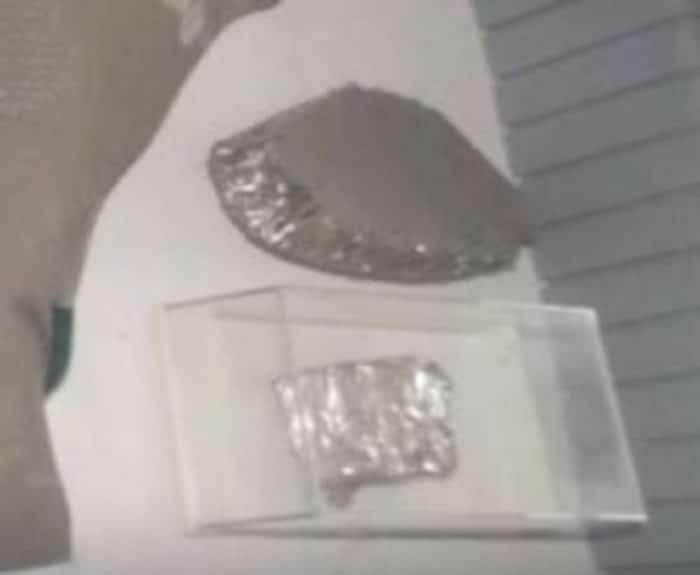 Perhaps even more bizarre, and as Rowe would point out to the organization themselves, why were they destroying trees and uprooting them when their whole reason for existing was to do the exact opposite and preserve them? They would respond that storm damage had caused them to take charge of the area and declare it off-limits. Even stranger, the soil itself was also replaced.

Rowe would press the person on the phone as to the highly unusual activities of the Forestry Commission. The response was perhaps even more telling. The voice informed him that it was indeed most unusual. However, “this is what he had been told to say!”

Shortly after this conversation, Rowe himself would receive a visit.

Several “mysterious men” would visit Rowe following his discovery of materials in the woodland area near Evans’ farm. They would insist that he hand over the recovered materials to them immediately. However, Rowe would inform them that the materials were with several different people at locations all around the country.

Furthermore, and perhaps a testament to his expertise in UFO circles, Rowe would offer that the respective people also received specific instructions. If anything was to happen to him, or indeed the wreckage, now safe in a secure location, they were to immediately come forward with their piece of wreckage and information.

With this, the men simply left and did not return. However, Rowe would claim that his post was obviously “intercepted” and searched through before arriving with him for some time following the visit. 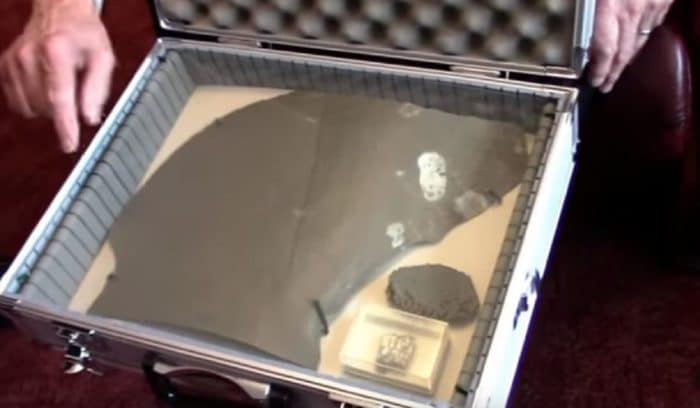 We should perhaps also mention that the areas around Aberystwyth have extensive underground systems. These stretch under large portions of the area. They were in use mainly in the Second World War as a storage system for items of value. It certainly isn’t beyond the realms of the imagination to think that these since abandoned tunnel systems and vaults, at least part of them, are now in the command of the military.

Or might the rumors of an alien base in the region have more truth in them than many might think? While we mentioned that Wales – especially along the coastline – is considered a UFO hotspot, we should also perhaps clarify that one of the most active towns is Aberystwyth. Of course, even with the wreckage, absolute proof of these claims so far remains elusive.

What should we make of the claims of the 1983 UFO crash in the small and otherwise nondescript village in north Wales? We have mentioned before on several occasions, not least in our look at the Berwyn Mountains incident, how parts of the country appear to attract more than their fair share of UFO sightings and encounters.

As outlandish as it is for many, even in the UFO community, persistent rumors of an alien base, possibly with the knowledge of certain high-ranking military and shadow government officials, being in operation somewhere off the Welsh coast. Might this incident have a connection to those rumors?

There is also no solid proof where the remains of the wreckage are. It is the opinion of many researchers that they reside in a top-secret military base. Possibly somewhere near Ceredigion. Others believe the wreckage to be in Aberystwyth itself, possibly in the theoretical alien-military bases in the area.

Whatever the truth of the matter it would appear that something most definitely did come down in Evans’ field. And most likely did so somewhere in the early hours one January morning in 1983. The pieces in Rowe’s possession would certainly indicate that. Whether it was an object of extraterrestrial origin or a secret military experiment is perhaps up for debate. Either outcome, though, would perhaps explain the increased number of UFO sightings in the region.