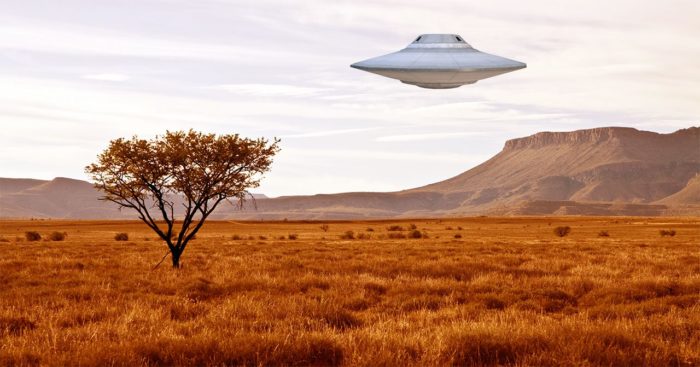 According to the late Tony Dodd, for a long time the UK’s leading UFO researcher and investigator, the Kalahari Incident of 1989 is as important as the Roswell crash that happened forty years previously to it.

What is even more bizarre about the incident, or more to the point, how knowledge of it came to the public, is that the initial documents were very obviously forgeries. Something would make Dodd look into the alleged incident, however, despite this. This would prove to be a decision that would change his life – not always for the better.

Artist’s impression of a UFO over the South African landscape.

According to the leaked documents, a craft, shot down by the South African Airforce, crash landed in the Kalahari Desert. The wreckage would be subject to a swift recovery mission, as would the occupants of it – each still alive. When Dodd did basic checks on the information with intelligence contacts, all would state the incident to be completely true.

What follows is largely based on an excerpt from Dodd’s book “Alien Investigator”. This book is essential reading for UFO enthusiasts and skeptics alike. Before we look into the Kalahari Incident, however, check out the video below. It is a look at Tony Dodd and how he became involved in UFO research. He passed away in 2009.

Documents would arrive with Dodd in the summer of 1989. An envelope bearing a South African postal mark would catch his attention one particular morning. [1] The sender of the information kept his identity secret among concerns for his safety.

Dodd immediately suspected strongly that the documents were not official and likely fakes. Aside from their appearance, incorrect spellings were in abundance. However, for reasons he couldn’t explain, he read them in full. The amount of detail proved to be startling – certainly not the usual attention to detail in other fake documents.

In short, the documents provided information on the craft, its material, and what would appear to be two pilots. Dodd would use contacts – particularly in South Africa and the United States – to check the authenticity of the report. All reports came back to him confirming the incident to be true.

It would puzzle Dodd as to why someone would send him authentic and correct information, as fake documents. Even more so when the sender eventually revealed his name as, James Van Greunen and agreed to come to England to further the investigation. Dodd would be witness to several threatening phone calls to him from the South African embassy. He would record these calls and later use them as evidence. Dodd was also aware of people following his guest immediately upon his arrival. These actions only further confirmed that the account was true in Dodd’s mind.

Essentially, the vast majority of what we know about this incident is largely down to Van Greunen’s fake documents. We look shortly at why Van Greunen did this, but first, what actually happened?

On 7th May 1989, a report of a strange, unknown craft entering South African airspace resulted in Mirage Fighter Jets taking to the skies to intercept. They received orders to engage, which they did, firing at the craft.

It came to a stop in the Kalahari Desert, around eighty miles from the border of South Africa and Botswana. The South African military would be on the scene within minutes. The fighter jet had continued to circle the crash site until they arrived.

The area around the object was evidently so hot that “sand and rocks had fused together!” Radioactivity was also so high in the crash site, than many of the military’s electronic equipment failed to work.

A Dassault Mirage fighter jet – the type of military aircraft that was scrambled.

The strange craft was a “polished, smooth silver” material, seemingly hard, but with no visible seams anywhere. What appeared to be portholes were present on the craft – these were “unevenly” spaced. Also, what the military assumed was “landing gear” was visible. This suggested that the craft was attempting to land as opposed to falling from the sky out of control.

The retrieval team would force a hatch open, and two “crew” members removed from the craft – both still alive. Each dressed in “tight fitting grey suits”, with an estimated height of around 4-5 feet tall. Their heads were much larger than their bodies, and their eyes were equally out of proportion. The report basically describes what most people would call a “grey” alien.  Under the suits, their abdomens also had a ribbed, scaled appearance.

The craft safely retrieved and on its way to an unknown South African military base, with dirt and sand covering any evidence of the incident. From there, the object went on a “one-way passage to Wright-Patterson Air Force Base” in the United States.

As Dodd began to investigate further, utilizing contacts in various places, as well as contacting military bases using secret codes and document names to gain trust as an “internal employee”, some of the information he revealed was startling. Even more so when separate sources began to corroborate each other.

Reports suggested that the South African government had “traded” the wreckage for “nuclear technology” – something international law prevented them owning. It had also been the Americans who had alerted the South Africans to an “object entering the Earth’s atmosphere” that would be in their airspace.

Furthermore, while two of the aliens did indeed make the trip to Wright Patterson in America, a third alien – according to a source in the South African military – would stay at the base in South Africa, and was unknown to the Americans. Many reports state that a facility referred to as Camp 13 is the base in question. Incidentally, Camp 13 apparently resides near the Kalahari Desert. Whether or not the alien is still in South Africa’s possession, or is even still alive, remains unknown.

Nor is the fate of the two extra-terrestrials that would go to Wright-Patterson. Many whistle-blowers and deathbed confessions have claimed that alien bodies are in the US government’s possession – many of them deep-frozen.

Dodd would eventually meet up with Van Greunen again while speaking at a UFO conference in Germany. It was here, in a small backroom that the truth behind the forged documents came out. Dodd, realizing how secretive the information passed to him was, pressed him in no uncertain terms for the truth.

Van Greunen revealed himself to be an amateur UFO enthusiast. He had come into possession of top secret and authentic documents through a friend in the South African military. This friend happened to be on duty at the undisclosed base. Knowing of his interest in UFOs, his friend had snuck the documents out.

He could see them and spend considerable time reading them, but he could not take them, or make copies. Once he had done so, his friend would sneak the files back onto the military base. The documents Van Gruenen had passed to Dodd were the result of what he had managed to commit to memory. He had tried to make them look “official” as he realized the importance of the information. He also realized that not many people would believe his report on his word alone.

As Dodd would come to realize over the coming years, the information was certainly authentic. So much so, threats on his own life soon followed his going public with it. Perhaps, however, the more he remained in the spotlight, the more difficult a target he became.

Although he would be safe in the UK due to governments not wanting a political incident, Dodd would receive information by several people close to him that he should be careful when traveling. He should avoid travel to South Africa at all costs, and – due to their military connections – not travel to France. If he did, it was likely, he would be killed.

Dodd also experienced a similar warning in Arizona in the United States in 1991. Again appearing in a speaking capacity at a UFO seminar, Dodd (and his wife) sat with two other UFO researchers enjoying a drink. Out of nowhere, two men in smart suits approached their table. Without them saying anything at all, the two researchers left. All knew why they were here, and who they wanted to speak with.

Again, Dodd would receive warnings to “be careful” about what he spoke about and what claims he made. Although the conversation progressed with politeness and smiles, they essentially told him, they would kill him if they had to. Dodd even agreed to meet with the two gentlemen the following morning, where again, they repeated their “threat. Although Dodd would claim he felt it was also more of a “friendly warning” than it had been the night before. The intent behind it, however, was no less deadly.

While the incident is brushed off by both South African and American governments, Dodd’s own reputation is strong enough that this encounter should be regarded as very much open.

Check out the video below. It looks at perhaps one of the more interesting, and credible UFO claims.