What is perhaps interesting about the 1953 Ellsworth Air Force Base – sometimes simply called The Ellsworth Incident – is that it is yet another sighting with both visual and radar confirmation. Furthermore, as well as the military witnesses, there were a further 45 residents who also saw events unfold that August evening.

Indeed, in the words of J. Allen Hynek:

What made these reports particularly significant was the fact that these people were trained observers – they were part of the national network of civilians who were keeping watch for enemy bombers!

That something was most definitely parading around the skies of The Mount Rushmore State that evening in the summer of 1953 is surely without question. What that something might have been, however, is still very much open for debate.

Perhaps also of interest, and as we have examined previously, there is an apparent incident at a location under the command of Ellsworth Air Force Base that occurred over two decades later in the summer of 1976. That incident not only involved a disc-shaped craft but also a close encounter with a “gray alien”. Furthermore, the base’s apparent connections to nuclear weaponry and storage are also thought by some to be a factor in the incident.

Whether that might have been the case for the 1953 incident is open to debate. It remains, however, one of the most intriguing and credible incidents on record.

A “Red Glowing Light” In A Clear, Moonless Sky

At a little after 8 pm on the 5th August 1953, [1] Mrs. Kellian, a member of the Ground Observer Corp in the town of Blackhawk in South Dakota would make a report of a strange glowing object in the sky overhead. The night was moonless and particularly clear. In short, visibility for anything anomalous was prefect. Her location, in the Black Hills region of the town, was around 10 miles away from Ellsworth Air Force Base.

As per her training and system that was in place at the time, as much for the Cold War as anything else, she would report the incident and was immediately transferred to Ellsworth Air Force Base radar operators. They too registered the object on their screens. 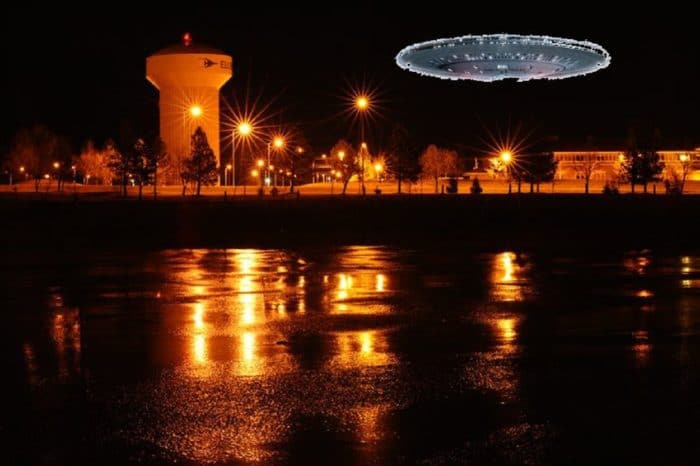 A depiction of a UFO over Dakota

At first, the “red glowing light” remained stationary before moving, slightly at first, then shooting “straight up”. It would come to a stop and then come back to its starting position in the sky. It would then move in the direction of Rapid City.

With the words of Hynek in mind, as well as a quick consideration of the political and (in terms of the United States) international backdrop of the Cold War to the incident, such sightings would have been taken extremely seriously. Not so much because they might have been “flying saucers” but because of the danger that they might have been Soviet fighters.

The reports were certainly taken seriously by Ellsworth Air Force Base that evening in 1953. Especially when it appeared the object was heading directly for them.

Something “Well Defined, Solid, And Bright!”

Following Mrs. Kellian’s report, three on-duty airmen were sent outside to scan the skies and obtain visual confirmation of the object. Several minutes later, they would report a strange light moving bizarrely in the exact location Mrs. Kellian had claimed. Furthermore, they would also corroborate the upwards motion of the object and its sudden return to its original position.

Meanwhile, the radar control operator continued to monitor the “well defined, solid, and bright” object on the screen. It would appear it was at an altitude of around 16,000 feet and was now moving. Slowly. 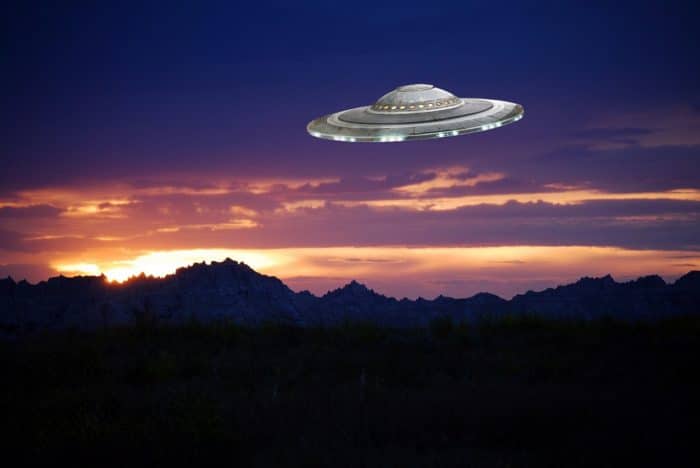 A depiction of a UFO over the mountains

As it was already carrying out patrol duties in the vicinity, an F-84 jet was put on immediate standby for a change of direction and an intercept mission. Several minutes later as the pilot of the jet followed the instructions to the location, he would confirm the glowing red light in the night sky. He was around three miles away upon visual confirmation.

As he closed in, however, the object began to move once again. And it would move with alacrity. A brief chase ensued (covering at least 120 miles), but it was soon obvious that the speed of the object was far greater than that of the F-84. Interestingly or not, a constant cushion of three miles was maintained by the mysterious craft throughout.

Eventually, the F-84 returned to base following the object disappearing out of the radar’s range. However, shortly after, at a distance of around 15 miles, it reappeared and began to tail the fighter jet. As the first F-84 returned to Ellsworth Air Force Base, another one, piloted by Lieutenant Needham, would scramble from the runway.

An Object That “Moved Across” The Stars!

As Needham climbed to around 15,000 feet he would spot the object to his right and below his plane. As if it somehow sensed Needham’s awareness of its presence, the object began to move rather erratically in the sky, changing colors from white to green as it did so. When the object surpassed his altitude, Needham began to pursue it, eventually reaching a height of around 26,000 feet.

All the while, the radar operator had both the unidentified object and the F-84 jet fighter in range. Communication also remained between the two, with Needham describing the object as definitely “brighter than a star”. And what’s more, he could visually see the object “move across them” as it traveled through the sky. 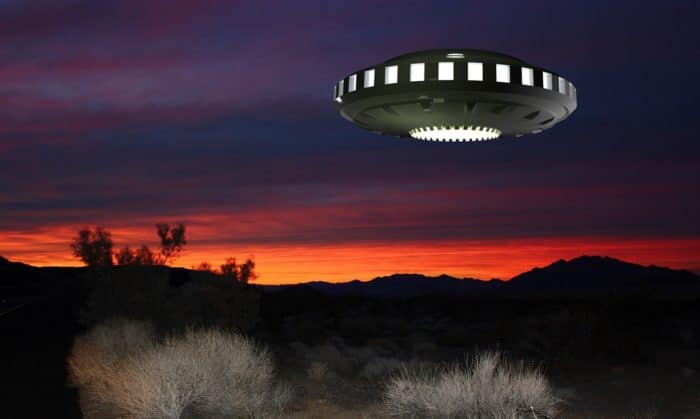 A depiction of a UFO over the mountains

Needham had performed several standard “tests” to ensure that the object was not an anomaly of one kind or another. However, none of these allowed the pilot to rule out a very real, solid, and unknown craft. One performing unbelievable maneuvers far advanced of anything terrestrially built.

Although the second F-84 piloted by Needham would return to base shortly after, a blurred several minutes before it did so are worth examining. According to an article written by Edward Ruppelt, Needham would turn on his radar-ranging gunsight, not so much to open fire, but to use it to confirm that something solid was definitely in front of him., Within several seconds, the gunsight was “locked on”.

Something solid was definitely in the skies over Ellsworth Air Force Base. Interestingly, the US Air Force would claim that the lock-on light was faulty. And furthermore, had come on and off several times as the jet returned to base. How accurate that statement is, is perhaps open to debate. Especially as there are no records of maintenance checks on the gunsight in the days or weeks following the incident.

The second F-84 returned to Ellsworth Air Force Base. At the same time, the UFO would head in the direction of Fargo in neighboring North Dakota. Interestingly, according to a NICAP write-up of the incident, several reports of a “fast-moving, bluish-white light” heading over the state would surface.

As well as the military witnesses, there were trained observers who also witnessed the incident (several others on the evening in question alongside Mrs. Kellian). Furthermore, several residents of the towns and communities around the base also made reports of seeing the glowing object overhead.

It is a case that is wrapped in intrigue and blurred lines. Perhaps intentionally so, so as to keep the true timeline and witness reports from being pieced together. Now, over half a century later, it is unlikely, barring the releasing of documents that may or may not relate to the case, that any further information will be forthcoming.

The United States Air Force’s official findings were that the objects were “unknowns” and essentially, unsolved.

Perhaps not surprisingly, however, despite the multiple witnesses and the radar confirmation of the United States Air Force, when The Condon Report looked at the incident, they would essentially dismiss the incident as a mistaken sighting. That the pilots were simply “chasing stars”.

It should also not surprise us that those who have investigated the case have trouble believing such a conclusion. Not least because of the sheer number of quality and trained witnesses involved.

It would appear, at least according to some, that those on The Condon Report had a desire to “distort information”. And essentially, coerce the outcome in such a way that favored their preconceived outcome.

Furthermore, whatever the object was, it appears to be substantially more advanced than anything in the skies at the time. On either side of the Atlantic. Unless, of course, the object was part of secret government projects. Which might explain the apparent desire to keep the incident as low-key as possible.

Of course, the encounter took place right in the middle of two of the largest UFO waves of the 1950s (in 1952 and 1954). So, with that in mind, it would appear highly likely, especially given the number of witnesses of the case, and the similarities to many of the other acknowledged UFO incidents of the same era and in the years that would follow, that there was an intelligence behind the object above Ellsworth Air Force Base that evening in early August 1953. What that intelligence might have been and where it came from, however, is still open to question.

Check out the video below. It looks at some of the most intriguing UFO sightings of the 1940s and 1950s. Just prior to the UFO craze that swept the world. 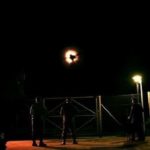