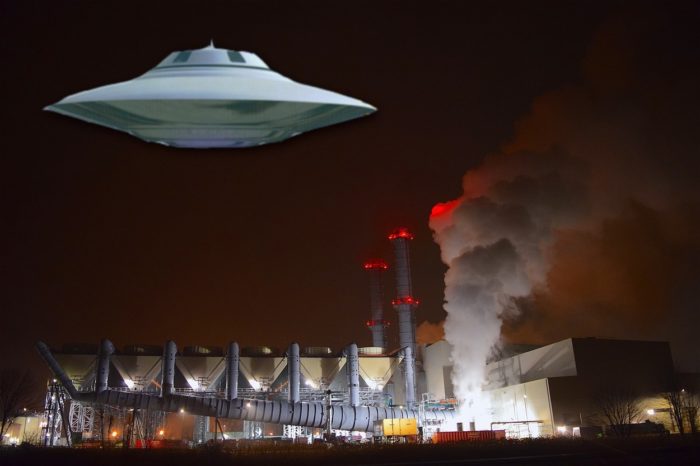 A report of UFO activity over the Newport Chemical Depot from September 1994 is another example of not only such activity over a secretive government facility, but it also represents another attempt, if we accept the claims to be true, to suppress the incident amid veiled threats of losing jobs and receiving public ridicule.

Indeed, so effective are these efforts of suppression of information, at least concerning this incident, that one of the witnesses to the events still refuses to speak of it or even accept to himself that it even happened.

A depiction of a UFO over the Newport Chemical Depot

Furthermore, there is little, if any doubt that many other sightings might be picked from the vines of time stretching back the start of the modern UFO era that is otherwise unknown and locked within the minds of the respective, and secret witnesses, lest they or those close to them succumb to one unfortunate turn of events or another. And such a notion, by definition is impossible to prove as these “secret witnesses” simply go unnoticed and their account unknown.

With that in mind, then, this account, as seemingly uneventful as it might appear compared to others, very much deserves its place in the ever-flowing ocean of UFO incidents. And each such account, albeit slowly, helps to build up an overall bigger picture. This will one day assist us in unlocking the mysteries of these strange sightings and encounters.

During an otherwise standard nightshift at the Newport Chemical Depot just outside of the town of Clinton in Indiana, at around 2 am, the anonymous witness was patrolling the perimeter of the United States’ government facility with a fellow security officer when events took a drastic and eventful turn.

Things began discreetly at first with the witness noticing a “dim light…above ground level and the tree line” moving toward their location. Each man remained in their patrol vehicle watching the strange light grow steadily larger as it continued its approach. The witness would recall:

It was a dark, moonless night and you couldn’t see your hand in front of your face. The one light that we first observed had gotten larger. And it was soon apparent that the craft had a glowing globe on each of its corners! [1]

You can view a sketch the witness would later make of the craft below. 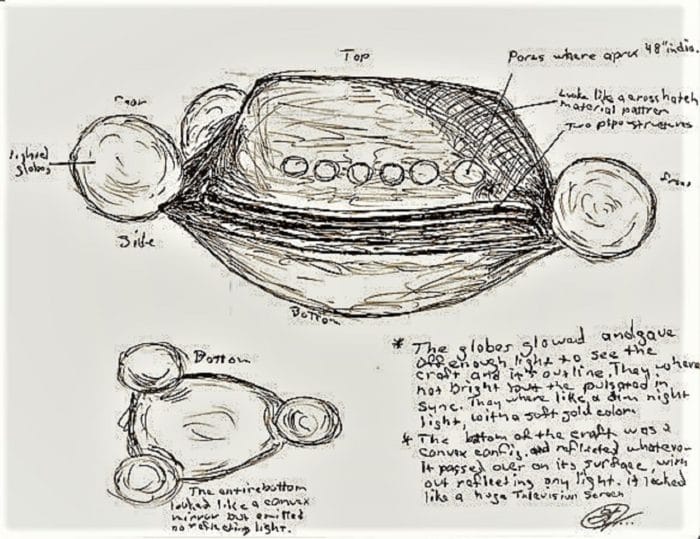 A sketch of the apparent UFO

As the two witnesses watched this now obvious nuts-and-bolts craft, they would both notice how the air “seemed different”. They would describe this sudden change in the atmosphere as making the air “muggy and hard to be breath”.

Meanwhile, the object continued its steady approach. Interestingly or not, the witness would report a bizarre warping of time. As if the approach took much longer than it should have. The next thing to two security officers knew the object was immediately over the perimeter of the facility.

So Low They Could Have Reached Up And Touched It!

With the object immediately outside the installation, the witness was able to give a detailed description of this bizarre craft. They would estimate the craft was “300 to 250 feet in length”. And approximately “125 to 150 feet wide on the tail end of its triangle shape”.

Furthermore, a “raised structure with portals” was clearly evident on the top side of the craft. These portholes were “dimly lit” and were similar in layout to those one might find on a boat. By contrast, the bottom had a futuristic “giant convex mirror” appearance. Even more bizarre, this underside would reflect “everything it passed over”. Although “there was no light reflected back from its surface” to the ground below. 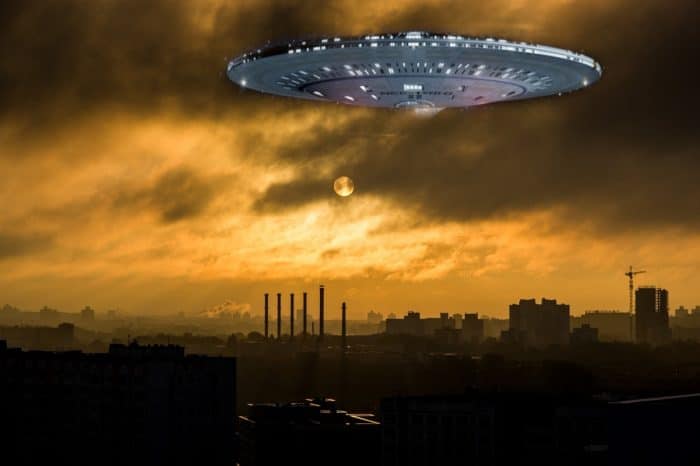 The witnesses claimed the UFO was at a low altitude

Also strange, and certainly against the laws of flight for a craft so large, the object now moved at a crawl of around 5 to 7 miles per hour. And what’s more, it was now so close to the ground that had the witness stood on top of their vehicle they “could have touched the craft with their hands”.

The object continued its defiant progress over the facility. The two witnesses would put their patrol truck into action in order to follow it. However, they would recall:

…we had moved only about 100 yards to the next clearing or vantage point, (and) the craft had vanished!

Perplexed as to how they could have lost sight of it so quickly and seemingly right under their noses, but sure of what they had witnessed, nonetheless, they would make a report of the incident to their superiors.

If Anyone Asks, It Was A “Low Flying Aircraft With Engine Trouble!”

Rather than going through a complete debriefing process with their superiors, the witnesses were told “not to repeat it to anyone”. Furthermore, after admitting they too had seen the strange object, they were all but told their jobs could well be at risk should they opt to ignore such advice. If anyone was to ask what they had witnessed that September night, they were to say it was nothing more than a “low flying aircraft with engine trouble”. 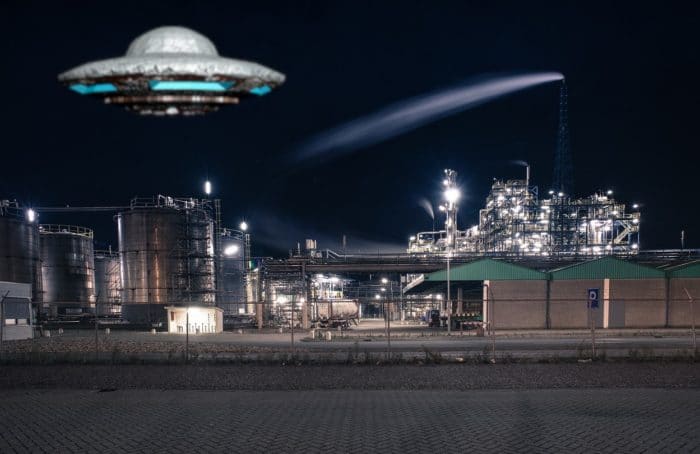 A depiction of a UFO over a power plant

The witness would keep the encounter to themselves for just over two decades. They would eventually issue a report to MUFON in 2015. However, rather than be able to point to a corroborating witness, the other security officer on the night in question “refused to acknowledge” the incident. While officially, at least according to plant records, the incident didn’t happen, the encounter remains another unexplained UFO sighting over a facility dealing with several highly volatile chemicals.

In fact, the location of the incident is perhaps as interesting as any other aspect of the case.

The Consistent World Of Coincidence

The facility itself has gone under several different names over the decades. These include the Wabash River Ordnance Works, and the Newport Army Ammunition Plant. Chemicals – often of a very hazardous nature and including nerve agents – were “mass-stored” at the facility. By 2008 – at least officially – this entire chemical stockpile had been destroyed (neutralized). Several years following the discussions began concerning the converting of the facility to civilian use.

Might it be, however, the one-time mass-storage of such potentially volatile chemicals that attracted these apparent cosmic visitors? Was it a reconnaissance mission like many of those that took place during the 1970s? 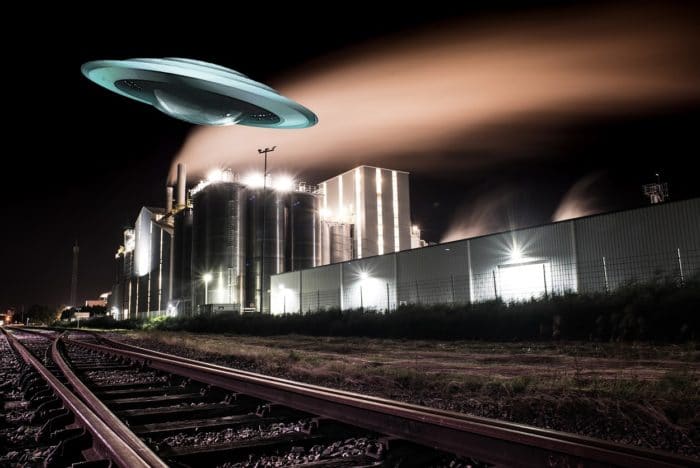 A depiction of a UFO over a power plant

It is perhaps also worth noting – at least regarding the UFO incident over the facility – the nearby of several other military locations. These include Grissom Air Force Base, the Terre Haute Air National Guard, and Camp Atterbury Military Base. While there are indeed such military bases all around the United States the connections they have to UFO sightings are worth taking note.

For example, was this particular sighting not one of cosmic surveillance of a military base but one of a top-secret craft? Possibly using reverse-engineered technology, returning to one of the nearby military outposts?

The fact is, such similar sightings are reported right the way across the United States. As they are around the world. Could it be that the sighting, or more specifically the location of it was not of any importance whatsoever in relation to where the mysterious craft was heading to? Or indeed coming from?

Even if that is the case, and the location is inconsequential, we are still left with yet another sighting of a solid object that is seemingly not of this earth. Why are these sightings continuing to happen, despite the official view that they simply don’t?

What’s The Connection? Why The Suppression?

The incident over the Newport Chemical Depot, while only a sighting of mere seconds and with no interaction, remains an intriguing encounter.

Was the incident one of the secret testing of military technology? Might that explain the instantly dismissive response to the report by the witness’s superiors? Is it possible they may have been made aware of certain details of such test flights? Perhaps in order to readily combat just such a sighting?

Or was the incident one of a genuine extraterrestrial vehicle that by coincidence would make its way over the facility?

We should perhaps also ask how it disappeared so quickly. As the witness did not see it leave, we can only speculate whether it literally “vanished”, as many UFO encounters describe happening “like turning off a light”. Or did it vacate the area at a blistering and unimaginable pace? Moving out of sight in a second or two?

As we detailed in the opening sentences, this incident, and others similar to it, while seemingly having little to offer UFO researchers are important to keep on record and in the collectively recent memories in UFO circles.

And what’s more, other similar and currently unknown encounters will surely enter the public arenas of the UFO community. Such encounters will begin to shine with ever more clarity. For now, though, this and others like it stand alone. Like dots waiting for us to collectively join them appropriately. And present ourselves with the big picture of the UFO and alien question.

Check out the video below. It looks at the apparent connections between these industrial and military facilities and UFO sightings.