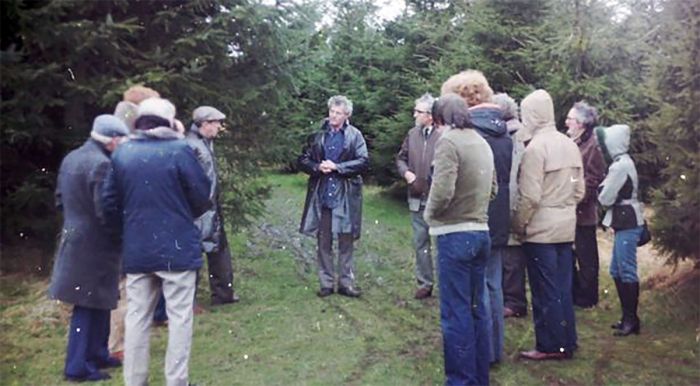 Police would treat Robert Taylor’s report regarding his apparent out-of-this-world encounter as a case of criminal assault. This would make the incident the only UFO or alien abduction case to be part of a criminal investigation.

It is highly probable that one of Scotland’s most famous UFO encounters sometimes referred to as the “Dechmont Woods Encounter”, involved the alien abduction of Taylor.

People gathered to discuss the UFO.

Many have undertaken investigations into the events of 9th November 1979 near Livingston. All agree Taylor himself is a very solid and credible witness. Essentially, most people believe him to be telling the truth entirely. Perhaps the fact that Scotland has more than the average of such sightings, makes the account even more interesting.

Whether aliens whisked Robert Taylor off from the Dechmont Woods that cold evening or not, it remains one of the most interesting and genuinely strange cases on record.

The Encounter of Robert Taylor

Robert Taylor decided to pull his vehicle to the side of the road so he could stretch his legs, and allow his dog to do the same. He did so, on a quiet road near to the M8 motorway.

As he made his way into the woodland at the road-side, a “flying dome” came into his line of sight. It appeared to be floating, slightly above the tops of the trees. The craft was close enough that he could make out the rough sandpaper-like texture of the black metallic material. An aroma of “burning brakes” suddenly seemed to fill the air. He noticed two objects that had fallen to the ground from the main craft.

Of more concern to Taylor, he could feel a pulling sensation on his body – as if the craft was dragging him towards it. It was then he realized his hips had “rods” attached to them, that had shot out from the small objects. He began to panic and pull back from it, but his body didn’t respond.

The next thing he knew, he was alone on the clearing floor. The object had vanished. After gathering his thoughts, Taylor made his way to his vehicle. Although some time had passed, it stood in the spot he had left it. It was a short joy, however. Try as he might, the car would no longer start as if drained of power by an unknown source.

He would continue his journey on foot. When he arrived home, his family was aghast at his torn clothing, as well as the cuts and bruising to his face and arms.

The short video below looks at the incident itself in a little more detail.

Upon his wife asking him what had happened, Taylor replied that “he had been attacked by a spaceship!”

Unsure what to do, his wife informed her husband’s employer and boss of the incident, Malcolm Drummond. He would always state that Robert was not a person to “make up stories!” He had no doubts whatsoever of his genuineness or lack thereof.

The police had Taylor take them back to the site of the encounter so they could see it for themselves. His torn trousers went off for scientific analysis. The conclusion being that the damage appeared to be in line with a machine-like object gripping and pulling him. In short, every indication so far was that he was telling the truth.

UFO researcher and former Ministry of Defense UFO Project director, Nick Pope, claims that the case offers “no middle ground!” It is his belief that Robert Taylor is a very genuine witness who had “little to gain and much to lose” by telling of the incident.

Robert Taylor passed away in 2007, but there remains an interest in his story. Not least, because of its apparent authenticity. Incidentally, Taylor would not alter his version of events at any point after the incident.

The video below looks at the Livingstone Incident a little further

We spoke about the Mann family in a previous article, who experienced a strange experience while driving home. Much like them, and Taylor, many others have found themselves suddenly involved in otherworldly incidents while driving on the sometimes lonely roads of the United Kingdom. One of the more interesting, and chilling, is the claims of Garry Wood, from August 1992.

Wood was driving along the A70 with his friend, Colin Wright. They were heading towards Lanarkshire at a little after 10 pm. Suddenly, a dark black object made its way into their line of sight high above them.

As they continued along the road, a bright “wall of light” descended in front of them. The two men appeared to be “caught in the headlights” of this strange light. They believe it was then that they blacked out. The next thing each of the men remembers is that their vehicle had come to a stop and the clock now read 11 pm. It also appeared that the car had changed direction, and now faced the opposite way they had been driving.

Understandably disturbed by the events, each of the men agreed to hypnotic regression. Their comments were both fascinating and alarming.

As their car came to a stop, their bodies stiffened in pain – as though they had received electric shocks. Three beings took the men from the car, and on to the black object, now on the ground. Both men would state the object was “very clearly a spaceship!”

Each was stripped of their clothes and subjected to intricate examinations. At the same time “red-hot poker-like objects” would explode into their eyes. Woods, in particular, said that screams of other people were audible around him.

They appeared to be in the same room.

One of the more recent of these types of accounts took place in January 2005. While driving along the A65-road in North Yorkshire, the Deverow family would share an experience that would change their lives.

Rachel Deverow, her sons, Benjy and Alex, and her mother, Anne, could all see a bright light hovering over their car. The clock read just after 5 pm. They continued on their way towards High Bentham when the light suddenly screeched towards them. In a flash, it then vanished! Shaken, but otherwise unhurt, the family went on with their journey, arriving home shortly after 6 pm.

It wasn’t until the following day that Rachel began to wonder just what had happened on their drive home. She would drive the route again. This time it would take only ten minutes to complete, while it took an hour the previous day. Either that or they couldn’t account for around forty-five to fifty minutes of time.

Reports on the local radio suggested that others had also seen the strange light that evening. Many callers went on air with their information. When Alex Deverow began to experience intense dreams, however, Rachel agreed to go under hypnosis to recover the memories she now suspected was residing in her mind.

Perhaps surprisingly, perhaps not, her testimony under hypnosis revealed all four of the Deverows were victims of alien abduction. Since the incident, they regularly witness strange lights over their farmhouse home. Whether those lights are simply sightings or further abductions, is a question still requiring an answer.

The video below looks at the Deverow’s experience in a little more depth. 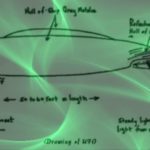 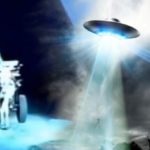