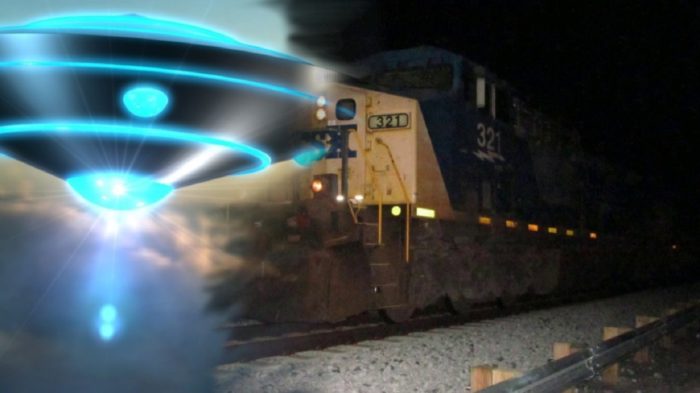 Very recently, one of our readers recommended we look an incident from Paintsville, Kentucky in January 2002. And we can see why. A case of an apparent collision with an unidentified disc-shaped craft and a cargo train is one that has divided the opinion of the UFO community. Is it merely a hoax? A report for nothing more than a bit of fun? Or is the incident one that has been successfully covered up by shadowy authority figures in the name of national security?

Did a UFO collide with a train in Kentucky in 2002?

It is certainly an interesting case. And one that potentially deserves further investigation. We have examined several cases of UFO encounters involving trains previously. But none that have involved an active collision. And none that has such an air of conspiracy surrounding it. If we believe the reports, who were the mysterious men who would question the witnesses? Why was there such activity at a disused railyard in the middle of the night? And what happened to the damaged carriages?

The Kentucky UFO Train incident is another that could be a mere footnote and questionable encounter. Or, it just might prove to be of discreet importance. And as we examine, a subsequent report of a sighting only hours earlier in the same area might make the latter more likely.

Something Hovering Over The Tracks!

At precisely 2:47 am in the early hours of the 14th January 2002, the witness, a worker on a train on its way from Russell to Shelbiana in Kentucky would experience an unidentified disc-shaped object crashing into the front carriage of their CSX locomotive [1] near the town of Paintsville. There was extensive damage to the first two carriages. The witness would report that he was aware of the exact time as his watch stopped there. It remains at that time now (at least at the time of the report in 2006).

The journey had progressed as normal, to begin with. However, as they neared Paintsville and the bend near milepost cmg 42, strange lights were visible in front of them, hovering over the track. Thinking that another train was heading in their direction on the opposite track they would dim their own headlights down so as not to blind them. It was as they rounded the corner that the electrics began to go haywire and the onboard computer began to “flash in and out”. Furthermore, “both locomotives died”. Then, several of the workers on the trains saw several more strange objects in the skies overhead.

They were “apparently scanning the river for something, the objects, at least three, had several searchlights trained there”. The first object appeared to be around ten feet over the top of the tracks. They were “metallic silver” in color with “multiple lights near the bottom and in the middle”. Furthermore, there were “no windows or openings of any kind” that were visible to the crew. As they had fully come around the corner, the impact occurred with the first object. 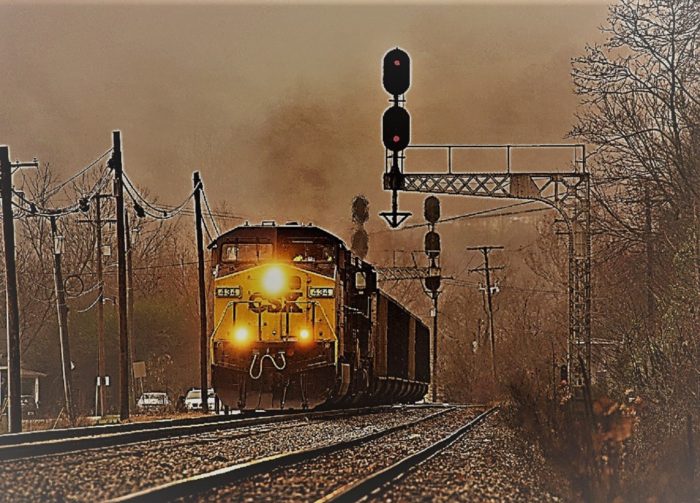 Image of a train in Kentucky

They would estimate it hit at around thirty miles per hour. While the object that collided would clip the top of the carriage and then launch over the top and out of sight, the other objects over the river simply “vanished into thin air”.

By now, the train was beginning to slow. Due to the power cutting out, the emergency brakes had locked in. They would come to a stop no more than two miles down the track following the impact. As soon as the train came to a halt, the power came back on. According to the witness, they would make a report to Jacksonville, Florida where their dispatcher was.

They would perform a quick check of their carriages and then attempt to make their way to the former railyard in Paintsville. Upon inspection, as well as the first two carriages, the trailing unit was “smoking” and “demolished”. The other two cars appeared as though they were “hit with a giant hammer”.

It was 5:15 am by the time they would arrive in Paintsville. As they pulled in, they noticed how strange the lighting appeared. As though it was “noticeably dark”. In fact, the only lights that were visible were from vehicles at the end of the railyard. They believed these were railroad officials who would take statements and investigate the carriages for themselves. However, as they would soon find out, they were not employees of the railroad. At least none they had heard of before.

As soon as the train came to a complete stop, a flurry of activity occurred around them. The witness would describe the scene as like an “army of workers immediately tending to our train”. Vehicle doors slammed all around, while several people in “weird outfits and lights glaring from all directions” rushed around. However, despite their efforts, they could see no railroad employees and officials. Then, a gentleman introduced himself with a handshake as “Ferguson” [2] and asked them to go with him.

They went inside an office and almost immediately the questions began – “hundreds of questions”. Without Ferguson or any of the other mysterious gentleman revealing who they were, they would continue to question the men about the incident. Then, at the end of the conversation, they informed the workers “for their own protection” they would receive medical tests. Then, they could leave.

The main witness would request to speak with one of his own superiors. However, rather than assist him in finding one of his employers to speak with the strange men “confiscated” his phone. They were then led outside, which was still a hive of activity. Several tracks over from them, a large tent was erected. Even more bizarre, the damaged carriages from their train had been removed. Although he couldn’t see, the witness believes the vehicles were under the newly constructed tent, which itself was “buzzing with activity”.

As the men left the railyard, Ferguson would inform them that this was a “national security matter”. Therefore, their silence “would be appreciated”. They took an assigned railroad vehicle to Martin, Kentucky where railroad officials would take an “official report”. After traveling back through Paintsville around eight hours later on their return journey there was “no sign of the engines, cars, tent, people. Nothing”. 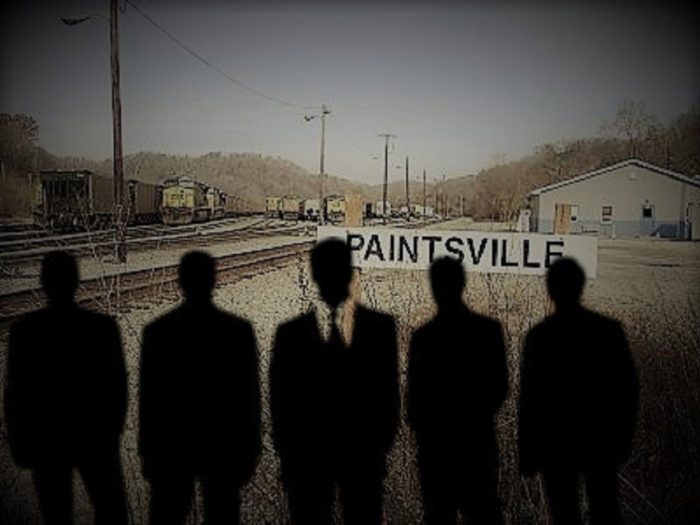 Depiction of the Men In Black over an image of Paintsville

“There Was Something Strange In The Area That Night!”

Perhaps worthy of mentioning is a report from 2010 of a UFO sighting at 11:53 pm on the evening of the 13th January 2002 in Paintsville. In reality, only hours before the train incident of the early hours of the 14th.

According to the report, the anonymous witness, a Paintsville firefighter and paramedic was driving home following their shift. They begin their report by stating they “don’t know if train/UFO was (a) hoax but do know there was something strange in the area that night”. [3]

As the witness was driving, he witnessed a “big light zig-zag” across the road in front of him. It would then travel over the top of them, roughly at a height of the trees at the side of the road – approximately 250 feet high. As they were watching this bizarre incident unfold, two more lights emerged. One on either side of the car, although a little higher than the first. They too moved extremely fast, moving out of the west and to the east and the town of Paintsville.

Furthermore, as this situation played out, the witness’s car began to struggle somewhat. According to the report the vehicle “didn’t quit but acted very strange”. The lights would flicker constantly and the gauges “went crazy”. The witness claimed they would make a report to the police. Unfortunately, they wished to remain completely anonymous and wouldn’t provide contact details even to NUFORC.

If the report is genuine, then it almost certainly shares a connection to the train incident several hours later. And given that this second report is very minimal, it would seem a “hoax report”, especially one to back-up the first would contain more sensationalist details.

An Authentic Incident Or Nothing More Than A Hoax?

Opinion appears divided on the authenticity of the case. Some who claim to be local and “in the know” on incidents on the railways of Kentucky claim that the first they have heard of the incident was following the report made by the witness four years later in 2006. It is their belief they would have known if anything strange had taken place.

On the other hand, others who have extensive knowledge of railways and the jargon that is used claim that the language in the report to be authentic and much the same as what would be used by those working in such an environment. And not just the jargon but the knowledge of the routes and procedures appears to be genuine.

And, if we accept the report of the mysterious men who “interviewed” them at the station then no news would have leaked out about the incident. It is one that is perhaps a case that still has secrets to unveil. Who the witness, for example, might be in reality, and whether they ever come forward with their name remains to be seen. Maybe they have decided to yield Ferguson’s advice? Maybe the account is nothing more than fantasy?

The short video below looks at the incident a little further. Make of it what you will. It is perhaps another strange incident to keep on the UFO and conspiracy backburner.