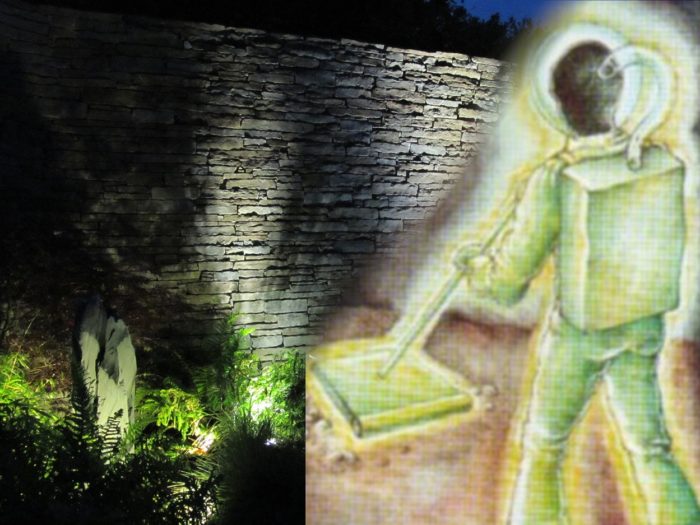 The strange encounter of “Mr. V” in Vilvoorde, Belgium in December 1973 was not just one out of several UFO incidents in Belgium at the time, but also one of a worldwide wave of humanoid sightings. The incident would leak into the wider public arena through the well-respected UFO magazine ‘Flying Saucer Review’.

Artist’s impression of the Vilvoorde Humanoid

Unlike many such sightings, the Vilvoorde incident isn’t one of claims of telepathic communication or abduction, and it is perhaps this simplicity of detail that makes the encounter so intriguing. The incident would unfold in the middle of a standard Belgian housing estate, just outside the industrial town of Flanders. Mr. V, who has always wished to remain anonymous, is the only known witness to the mysterious incident. An incident which very well may still have secrets to divulge.

A Green Glow Through The Curtains

It was shortly after 2 am on the 19th December 1973 when 28-year-old Mr. V awoke to use the toilet. Leaving his wife asleep in their bed, he made his way to the outside lavatory in the yard outside their kitchen. Not wanting to disturb her, he took a torch with him to guide his way rather than put on any lighting. As he entered the kitchen, though, right before he was about to open to the door to the yard, he heard activity coming from outside.

The sound of someone striking the pavement with a shovel reached his ears. At the same time, he noticed a strange, green glow seeping in through a gap in the curtains at the kitchen window. Normally their garden would be in total darkness. Slowly, he moved towards the window and peered through the tiny gap letting in the green light. There, in front of him at the end of the yard was a humanoid figure wearing a one-piece suit which shined brilliantly and appeared to be the source of the green glow. The figure was around three feet tall with all features such as head, legs, and arms being of normal proportion.

As the figure moved, the suit glowed fantastically sending sparkling colors into Mr. V’s line of sight. The head part of the suit was a rounded, globe-shaped transparent helmet. He also noticed a strange rectangular block on the figure’s back. It too sparkled and was made from the same material as the suit the figure had on. As he studied the figure’s attire a little more closely he realized he couldn’t see any seams, stitching, zips, or buttons. It was as if the garment was molded on to the figure’s body.

An Attempt To Communicate

As the strange humanoid moved about in the yard Mr. V noticed a belt around the waist. In the middle of this, where the buckle would be, was a “square box” which glowed a red color. He further noticed that the figure’s hands were heavily gloved, which in turn connected directly to the sleeve of the sparkling suit.

Even more bizarre was the strange apparatus the entity carried with it. Mr. V would liken it to a vacuum cleaner, although the humanoid used it like a metal detector, sweeping the long handle-like part of it back and forth across the ground. The handle connected to a larger, thick, rectangular object. Once more, this detector-like object appeared to be made from the same material as the figure’s clothing and “back-pack”. Furthermore, the humanoid moved with an awkward “waddle”, as if restricted by the strange suit and devices.

Looking at the torch in his hand, Mr. V made the decision to attempt to establish communication with the figure. He flashed two quick bursts of light from the kitchen window. Immediately, the humanoid turned around. However, it did a complete 180-degree turn giving Mr. V the impression that it couldn’t turn its head independently.

Once turned, Mr. V found himself looking directly into the humanoid’s face. No mouth or nose was visible. However, he could clearly see a pair of pointed ears, and perhaps most striking, a pair of bright, yellow, glowing eyes. A “green rim” ran around the edge of the eyes, which were larger than those of a person. Most disturbing was when the creature blinked. When it did so, only for a moment, the entire face became a cavernous black.

Then, as Mr. V looked on astonished, the creature raised its hand and gave a “V” sign. 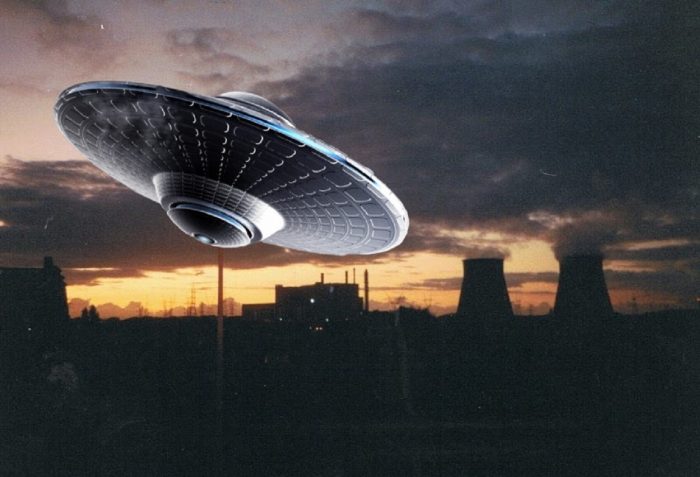 Are aliens trying to communicate with us?

Before Mr. V could respond in any way, the humanoid turned clumsily and headed towards the back wall. However, instead of stopping, the creature simply placed its foot on the wall, then the other, and walked up the wall as if it were walking along a pavement. Perhaps there was some kind of technology within the boots of the creature, the witness speculated, as he noticed how the legs were now particularly “rigid” as it “walked” upwards.

As it reached the top the humanoid straightened up, standing on top of the ten-foot wall for a moment before disappearing over the other side, seemingly walking downwards in the same fashion as it walked up moments before.

Mr. V remained at the kitchen window for several minutes. Then, a bright white light suddenly emerged from the other side of the wall. He could also hear a persistent “whirring” sound. He continued to watch and several moments later, a large, round object lifted upwards into the night sky.

After a moment, however, its progress stopped, and it hovered directly overhead. The whirring sound continued as it did so. Mr. V would estimate the width of the craft to be approximately fifteen feet across. He couldn’t see too much detail, although he could clearly make out that the bottom half of the craft was a dark color, while the top half had a distinct orange glow to it. On the underside was a row of three lights. One blue, one yellow, and one red, which flashed in an apparent sequence.

As he continued to watch, he could make out yellow “sparks” seemingly emerging from the area between the lower and upper half of the object.

As he continued to watch the strange sparks, he could see something spinning within the middle section of the craft which was the obvious cause of the activity. He could also see briefly inside the transparent dome on the top half of the object. Inside, in a wash of blue-green light, sat the humanoid. He could also make out what appeared to be an emblem or logo on the craft of a black circle with a yellow lightning flash.

Before he could take in any further detail, though, the object began to rise again. As it did so it swung back and forth in the air sending sparks in all directions. The whirring noise also began to grow in volume and urgency. Then, the object shot directly upwards vanishing from Mr. V’s sight in a matter of seconds as if it had never been there.

Mr. V would retreat from the window and sit at the kitchen table to take in and process what he had just seen. He would ultimately report feeling no fear at any point during the encounter. Nor of feeling threatened at any stage. There was, unlike many close encounters, no telepathic communication or anything of that nature.

He would ultimately return to bed after making a light snack following the incident and fell asleep with little trouble. Furthermore, upon waking the following morning he felt no unusual or problematic symptoms. Perhaps it is the lack of these extra details that make the encounter so credible. If someone was looking to provide a hoax account for monetary gain or simply for attention, one would imagine such details would have been added. 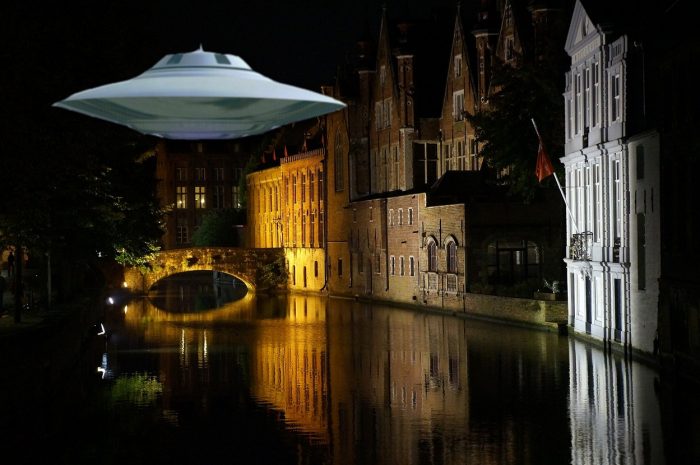 Why do so many UFO encounters share the same details?

A Wave Of Activity In Belgium, December 1973

1973 was a particularly active year for UFO sightings across the globe. And in Belgium, around the same time of the Vilvoorde humanoid sighting came several other strange incidents. For example, just over a week earlier at 6:30 pm on the 11th December, in Dilbeek, a white luminous disc was clearly visible in the dark evening sky for several minutes.  The main witness, an unnamed 54-year-old woman, would report the object had a dark underside and a “yellow dome” on the top. She would also report seeing two flashing red lights on the bottom of the craft as it climbed higher and out of sight. Two other witnesses would corroborate the sighting.

Only hours earlier, at 5:45 am, in Frameries, Hennegua, a “yellow dome” with “dark bars” on the exterior was reported by an anonymous witness. They would also report flashing lights on the underside of the object – this time, one red and one blue. It was visible for several minutes before vanishing with absolute breakneck speed. Only hours before that sighting, on the evening of 10th December at a little before 10 pm in Houtain-Le-Val, a “luminous red object” with blue flashing lights on the underside was reported.

On the evening of 6th December, at around 7:30 pm in Romeree, “several objects” were reported by local residents. Just after midnight of the 3rd December, another unidentified sighting was made, this time in Brussels. An almost identical sighting occurred in Brussels exactly twenty-four hours earlier in the early hours of the 2nd December. Six hours later, in Boisfort, an unnamed witness would report a similar object in the early morning sky.

Whether these strange objects over Belgium in December 1973 were of the same intelligence as the Vilvoorde humanoid is open to debate.