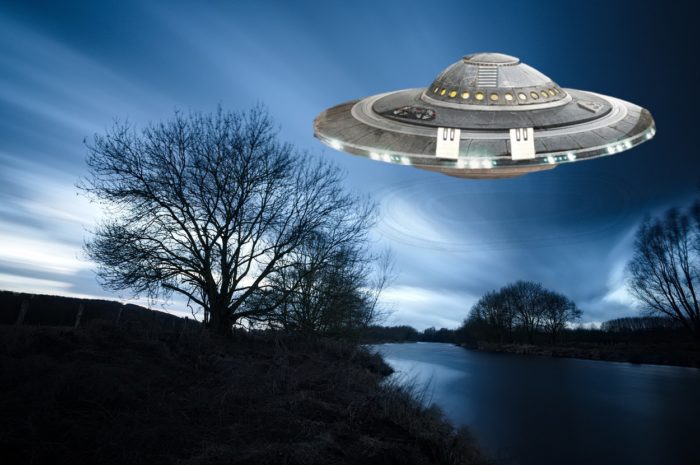 A multiple witness UFO incident in January 1978 in Cheshire in England is perhaps little-known outside the UFO community but is also one of the most intriguing on record. Not only does the incident feature multiple witnesses, but it hints at being involved in the cattle mutilation cases – many of which gripped the United States and parts of Europe in the late 1970s.

Just what happened over the River Weaver?

Furthermore, the apparent extraterrestrial intelligence behind the strange craft they witnessed land in a clearing along the River Weaver was almost identical to a human. And what’s more, appeared to be involved in some kind of intelligence gathering program. This is interesting as many other cases of “humanoid” occupants also offer very similar details.

The four witnesses, as we shall see, would remain anonymous mainly due to the fact that admittance to their presence on the land where the bizarre scene played out would have been an admission of breaking the law, which only added another level of complexity to the case and the reporting of it.

The account appeared in the Volume 26/No. 3 1980 edition of Flying Saucer Review, investigated by Jenny Randles and Paul Whetnall.

On the particularly cold evening of 27th January 1978, at a little before 6 pm, four young men would be witness to bizarre events near the banks of the River Weaver in Cheshire. And what’s more, because of the reasons they were there in the first place (to hunt pheasant on a farmer’s land – essentially, poaching) they would not only think twice about reporting the incident, they would most certainly insist on anonymity following their report.

Whether of coincidence or not, the four men in question were at a spot along the river known as Devil’s Garden, a place that has several local legends attached to it. It was while the four men were stood looking out over the water when one of them noticed a “strange object” seemingly skimming along the surface of the water. 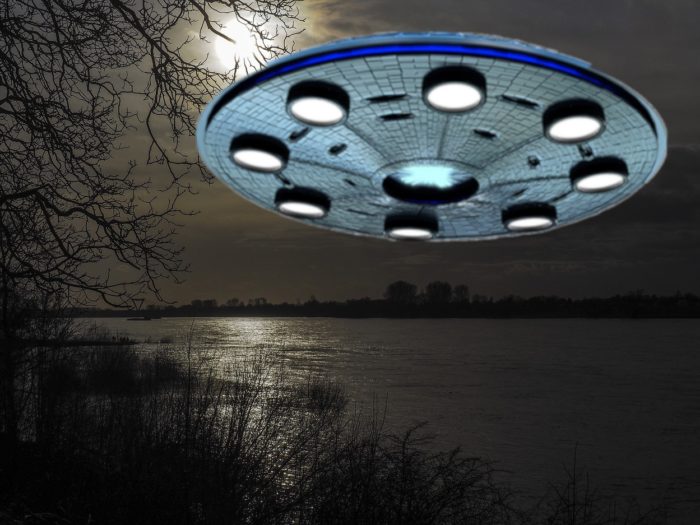 Many UFO incidents occur near water

Because of a recent news story of a Soviet satellite that had crashed to Earth in Canada, the witnesses believed this is what they were seeing. However, the more they watched the mysterious object – now over the ground at a height of now more than 20 feet – the more they realized it was seemingly under control as opposed to falling out of the sky.

As the object passed them the witnesses could hear a light “humming” sound. However, more than this, and a discreet detail that surfaces in other UFO reports, there was a strange noise very similar to “rushing wind”. And what’s more, this wind-like noise made all four men feel decidedly uneasy.

All four watched the object – a silver, spherical craft – as it descended down fully to the ground and landed near to the group. They would estimate that it was around 15 feet in size and had flashing lights along the side. Furthermore, there were window-like areas along the craft, out of which a “very strange glow” seeped out from inside.

The men would state that this light hurt their eyes to look at it for any prolonged length of time. From their descriptions, investigators determined it was likely an ultraviolet-type light. Despite this illumination from inside the object, however, the witnesses couldn’t see anything of the inside, which appeared “fuzzy” from where they stood. Still unsure what it was, the fuzziness made them think of radiation poisoning which caused them to begin in the opposite direction. Before they could, though, they noticed a figure emerge from the strange object. 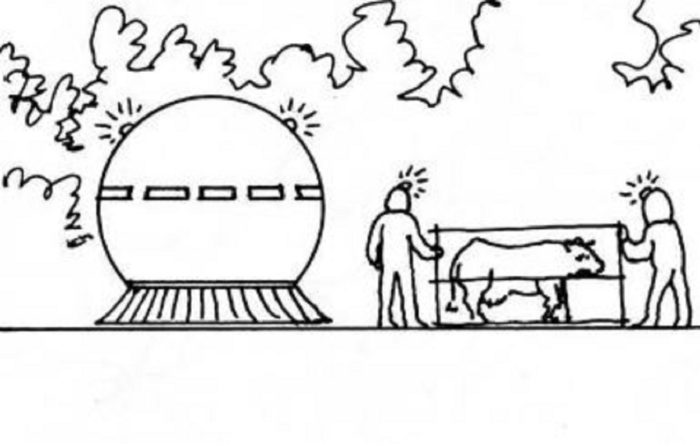 They each stopped in their tracks to watch events unfold. The figure was distinctly humanoid in every way and was wearing a one-piece silver suit. On his head was a round helmet with a violet light on the top of it. As the figure turned its head, the area became bathed in the helmet light’s glow.

The men continued to watch as the humanoid examined his surroundings. They would follow the direction of his stare (through the wash of the light), which soon fell upon a herd of cows in a nearby field.

All three stood still – the figure, the herd of cows, and the four witnesses. Then, the strange figure returned back inside the object.

A moment later, however, the figure emerged once more from the craft. This time, though, another second humanoid – dressed in the same attire – joined him. In their hands was a large silver, cage. It appeared to be made of a metal of some kind. The figures, however, carried it as though it were extremely light.

They were heading in the direction of the herd of cows. They would approach one of the animals – which appeared completely frozen to the spot – and placed the cage around it. The humanoids appeared to move pieces of the metal into position. The men were not sure if they were measuring it or preparing it for transportation. 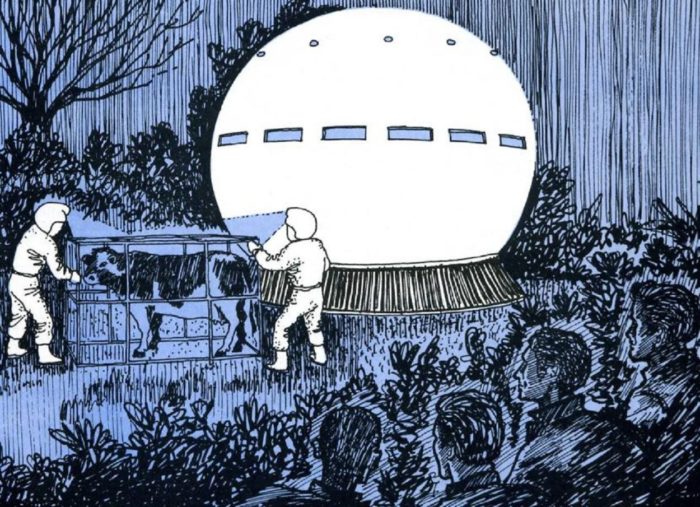 However, they didn’t wait to see what happened next as the urge to run became too great. They would continue running until they reached a bridge which allowed them to cross back over the river. By the time they did, they could see nothing more of the strange craft or the two humanoids.

One of the witnesses, however, would later describe to investigators of a strange “pulling” sensation as he was running. As if an “invisible force” was dragging him back. This was particularly so on his testicles – which he would declare remained “sore” for several days following the incident. Furthermore, he would notice red markings, which were also painful to touch, on his upper legs.

The case remains unexplained and the identity of the four witnesses remains unknown.

We have examined previously that 1978 was a year of unusually high UFO activity. And this was not only in the United Kingdom but around the world. The UK, however, did experience several, at the time, well-publicized cases. And these were not only of UFO sightings but of interaction with the occupants of these strange crafts. Some cases were outright cases of alien abduction.

Perhaps most well-known were the cases of the Mann family and the Day family, both of whom would claim to have experienced alien abduction during 1978. And both of whom would undergo their respective encounters in quiet, country-like settings, in the evening.

Some researchers, mainly general skeptics but not all, point to the release of the blockbuster movie Close Encounters of the Third Kind. Although the film was not released in the United Kingdom until early March, publicity for the film was rampant pretty much from the start of the new year. And increasingly so in the weeks leading up to eventual release. 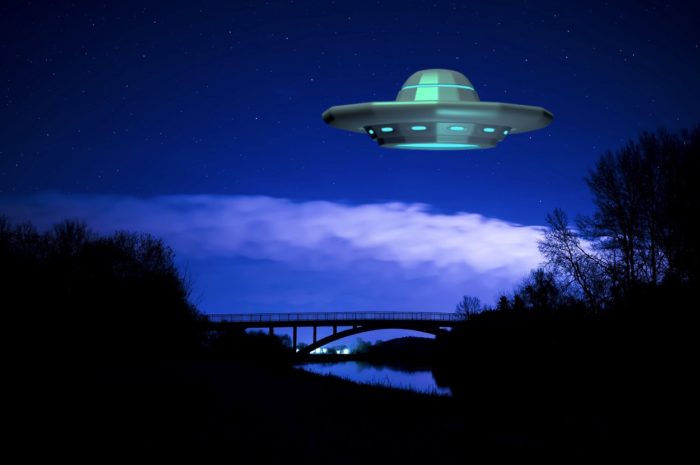 A picture of a UFO over a river at night

Might this have had an affect on the populace of the United Kingdom? It is certainly possible in terms of sightings only. Many more people indeed might have been looking upward with an increased interest in such matters. However, especially when there are multiple witnesses concerned, cases of close contact, interaction, and alien abduction are a little harder to explain as merely a subconscious response to a popular movie.

The River Weaver case is one that is perhaps easy to dismiss. We don’t know the names of the witnesses, there is no physical proof of the incident. And the four decades that have passed since make it increasingly unlikely that any new or revealing information about the case will surface.

It is also worth noting, though, as reported by Randles and Whetnall, that several similar sightings in and around the United Kingdom were reported around the same time as the River Weaver case. For example, on 2nd January, a report surfaced of a “silver-suited figure” in Rainford in the Merseyside region of England.

Even more intriguing, on 18th January, several school children witnessed and reported a “small UFO”. The strange craft would land on top of their school. What’s more, three “astronauts” then emerged from the craft. They were again wearing one-piece suits, this time golden. However, given that the incident occurred during the day it might be that the “golden” color was a reflection of the sun (we should note this is speculation on our part).

However, where its value does lie, much like other similar obscure cases, is in the details. Details that might appear insignificant to begin with but resonate with many of us who recognize them in other cases. Not least the humanoid figures, themselves, the one-piece silver-suits, and the feeling that they were gathering information from their locations.

As ever, the real question that lies at the heart of such incidents is why? For what purpose of such information-gathering missions? Might the humanoids have not been from an alien race at all but human beings from Earth? Themselves part of a clandestine operation. What if this was to be the case? Does this present us with an avenue to travel down as far as cattle mutilation cases are concerned? While it is not a revelatory idea, might it be that such cases are top-secret government experiments?

Check out the video below. It looks at some of the strangest cases of close encounters on record. 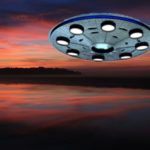 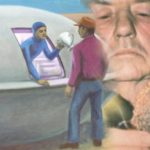