In the early hours of 3rd September 1965, numerous witnesses would make reports of strange activity in the skies of Exeter, New Hampshire. Even the police officer at the scene of one of the sightings would see for himself the strange craft. As would another several moments later, and a respected journalist after him.

Repeated requests for assistance and information regarding the strange craft made to the military went virtually unanswered, save for an eventual and much-delayed response stating the activity was nothing more than “natural aerial phenomena!”

Investigations that would follow however would suggest otherwise. Even the locations of the sightings drew possible connections by one researcher to the power blackout that hit the entire east coast of the United States only two months following the sighting.

Just after midnight, policeman, Eugene Bertrand, would receive a strange call at the Exeter police desk. A young woman, in an obvious state of distress, claimed to have been “chased by a flying object!” while driving. Scared for her life, she pulled the car to the side of the road on Route 101. The mysterious craft had now vanished in the distance, but she dare not move.

Bertrand did his best to assure the frightened woman that she was in no danger. He strongly suspected it might some kind of prank by teenagers to waste his time. He would proceed out on his patrol duty, sure that the young woman had made a mistake. So much so that no official record of the call exists, and the young woman concerned remains unidentified. One interesting point to note here is that when Bertrand later spoke to UFO author, John Fuller, he would recall he came across the parked car of the woman in question while on patrol.

Just after 3 am, a call from main station came over the police radio that made Bertrand rethink the strange report. Another claim of a bizarre sighting in the sky had come in. And the witness sat at the station ready to tell his tale.

Norman Muscarello’s hitchhiking journey along Route 150 had taken a most bizarre and frightening turn. A strange glow in the distance caught his attention. However in next to no time, the light – which now had a more solid appearance – was almost over Muscarello. The eighteen-year-old flung himself to the road and lay as flat as he could. The craft seemed to “swoop” over him but would change its course at the last second.

Bright lights sat on the underside of the object and to Muscarello, it seemed as big as a house. Its motion appeared to “wobble” as it cut through the night sky. With no idea of what he had just seen, the teenager eventually found his way to the Exeter police station.

Reginald Toland would take the initial report from Muscarello. The shaken young man could think of no better way to describe the object than “the thing!” Seeing how frantic the Muscarello was, made Toland radio for Bertrand to return to the station. He felt it best that he hear the encounter for himself.

Following the re-telling of the incident to Bertrand, the policeman got in his car with Muscarello and drove to where he had seen the monstrous object. It didn’t take long for them both to see the apparent spaceship again. 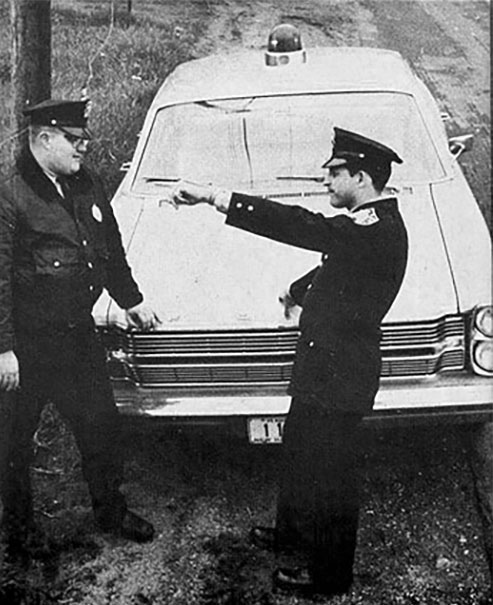 As soon as Bertrand brought the car to a stop, both men could see the bright craft in the distance. As if sensing their presence, it quickly zeroed in on their position and headed in their direction.

The two men quickly took cover in the police vehicle. The airborne object hovered over them for several seconds, before it took off again, moving away from them. A fellow policeman, David Hunt, would also make a report of seeing the strange craft on the same stretch of road. His description of the object would match exactly that of Bertrand and Muscarello’s.

More calls would jam the police phone throughout the early hours of the morning from concerned and anxious residents. A reporter for a local newspaper the “Haverhill Gazette”, Virginia Hale, saw the huge craft at very close range, hovering for around five minutes over her neighbor’s house.

The ample amount of witnesses convinced Bertrand that these people were seeing “something” – even if he hadn’t have seen it for himself. He also would remember the call he received from the young woman just after midnight. The idea that it might have been a prank or she had made a mistake, no longer seemed valid.

The military would prove to be very uncooperative with requests for information. Consequently, the bulk of the investigations are due mainly to private UFO researchers.

Check out the video below. It is a recreation and looks in a little more detail at The Exeter Incident of September 1965.

Respected ufologist, Raymond Fowler, would read the incident into the congressional record in April 1966. This was despite the military, and ultimately the Pentagon, dismissing claims of strange activity to investigate. He would also draw comparisons to other recent UFO sightings. The East Coast power blackout of November 1965 (just two months following The Exeter Incident) was still fresh in everyone’s minds, perhaps not least due to the reports of UFO sightings at the same time.

Fowler went further, referencing the presence of water and power lines near to the sightings in Exeter. Even descriptions of the craft, the presence of lights on its underside and how they pulsed were similar, Fowler argued.

Was there a connection between the famous 1965 blackout and the UFO sightings in Exeter two months previously? If, as some speculate, the blackout was the result of some kind of “energy tapping” by the other-worldly objects, might the sightings in Exeter have also been an attempt to tap into the power or water reserves over which it was seen?

Much was also made of the credibility of the witnesses, in particular, the police officers. Just by making their reports they had “put their careers on the line!” And Fowler could think of no reason they would do so unless their accounts were accurate and true. As with many such cases, there are still many questions, waiting for many definitive answers.

The video below features a recent in-depth discussion about The Exeter Incident. It makes for interesting listening. 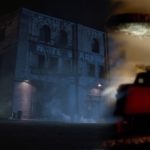