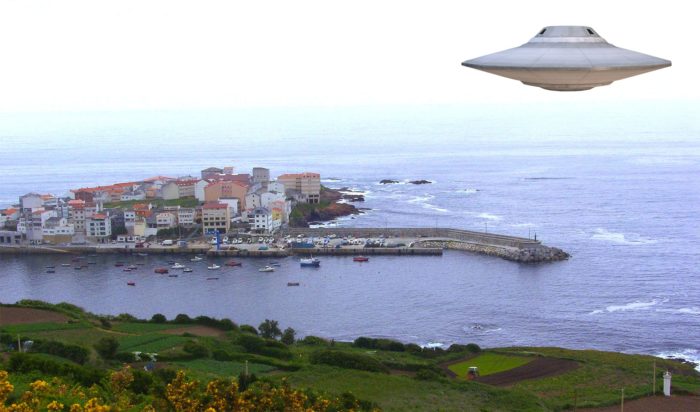 The Galicia area of Spain is largely a quiet, relaxed part of Europe. In the winter of 1995 and into the new year of 1996, that would change dramatically as the area was subject to a string of UFO sightings. These sightings, preserved on film by military security cameras, as well as witnessed by multiple residents of the area, were of genuine concern to the Spanish authorities. As was the attention these bizarre activities would generate. Reports of glowing craft and even of “humanoid beings” would for a time, attract the focus of the media and UFO interest groups alike.

Interestingly, when the Spanish government recently declassified UFO files dating back to the early sixties, it became apparent that these sightings had been happening for thirty years before the sudden wave that would catch the attention of the world’s media. Many would question just how aware the Spanish government actually was.

What is perhaps even more interesting, two decades after the Galicia wave, there appears to be an increase in sightings in this region of Spain once again. And with those sightings – in the Internet age no less – come a host of theories and conspiracies. Before we look at events in mid-nineties, check out the video below that looks at a sighting in Galicia from January 2012.

On the evening of 28th November 1995, security cameras operating at the As Gandaras military base in the Galicia region of Spain filmed several strange objects in the night sky. The Spanish military would take the sightings extremely seriously. According to anonymous sources, there was a genuine fear among high ranking officers of a “mapping of their facilities!”

It would have been preferable for the military to keep the sighting “in house” and away from public scrutiny. Unfortunately for them, a group of young men playing soccer in a nearby field also saw the strange objects. What’s more, they would waste little time in telling of their account to the Spanish, and in turn, the world’s media.

By the time the media had picked the bones of the details, it would come to light that the sightings began several days earlier on the 23rd November. And far from being limited to those inside the military installation, they were witnessed by many different people.

Reports were very similar to each other. The crafts were saucer-shaped, with red, blue and yellow lights beaming from them. One report would state that the object flew so low he could see “large windows” in it, and also, interestingly or not, that “no-one was inside!”

Perhaps even more disturbingly were the warnings from UFOlogist, Marcelino Roquejo. He would offer to all who would listen that the recent sighting was but one of many happening regularly in this part of Spain. Further to that and more ominously, seismic disturbances were increasing at the same time. To Roquejo, there was surely a connection.

The sightings would continue throughout the remainder of 1995 and into early 1996. Sightings in January alone were much higher than normal.

The small town of Pedrona was subject to a “luminous oval object” calmly sailing through the sky overhead. A short distance away in Gijon, several residents would report seeing a strange object hovering a short distance away from the coast over the sea. It sent out a fantastic array of multicolored lights that bounced off the dark waters below.

Perhaps one of the more fantastic sightings – captured on film to boot – was that of Bartolome Vazquez. Not only did Vazquez manage to record a clear triangular craft, but also the two military fighter jets seemingly in pursuit of it.

Another sighting, broadcast in part by the local television station, Channel 55, who responding to the surge of calls from excited residents, went out to film a “giant oval craft” that hovered motionless for almost an hour.

Along with the strange sightings, those who called this area of Spain home soon began to notice another presence – many high-ranking military and government officials.

On the evening of 26th February, while driving home to the city of Lugo just before 2 am, Andres Landeira, suddenly felt his vehicle struggle to gain traction on a steep hill. It was then he noticed his car rising from the road and into the air. Before he could come to his senses and attempt to jump from the car, he was over thirty-feet from the ground. Scrambling back safely into his seat, he gripped the steering wheel as hard as he could.

Then, as quickly as the bizarre experience began, the car fell back to the road. When Landeira composed himself, he noticed the clock on the car had frozen at ten minutes to two in the morning.

Landeira is largely regarded as a sound and credible witness. Furthermore, other independent witnesses would state they saw “strange lights” in the sky over the same site where Landeira had claimed his encounter took place.

Just over a week earlier to Landeira’s encounter, two children would report three glowing spheres in the sky while they were playing in the woods. After watching them for several minutes, they would merge into a single shape, very much like a saucer.

The following day, the two children returned to where they had seen the strange lights, and on the ground were footprints, unlike anything they had ever seen before. When they eventually led investigators to the location, their examination of the scene indicated whatever had left the prints was well over seven foot tall.

In the early hours of 7th March, Jose Manuel Castro would witness an airborne craft land on the ground no more than one-hundred feet from his house. As he watched events unfold from an outside balcony, strange creatures who “looked like monkeys” left the craft and began to explore their immediate surroundings. They arrived on the ground via a strange beam that projected out of the bottom of the craft.

There were three of them. The sphere itself appeared to be transparent, and the creatures appeared to simply walk through the outer exterior of it. They appeared to perform some strange ritual. They joined together in a “conga-like” procession and appeared to head towards Castro’s house.

At this point, Castro, beyond terrified, retreated from the balcony and locked himself in his property. The following day, he ventured to the area where he had seen the craft. There were strange footprints in the fresh muddy ground – prints he had never seen before.

The sightings appeared to cease as the spring announced itself – as did the seismic activity. Was this a consequence of their appearance? Or might the link be more direct? And what of the increase in sightings there in recent years?

Check out the video below, which features footage of a conspiracy in its own right. In the summer of 2009, footage showing military jets giving chase to a UFO off the coast of Galicia surfaced online. It has since been “proven” to be a hoax, but some believe this “proof” it itself is simply a cover-up of footage that never should have arrived in the public arena. Judge for yourself.

UFOs, Abductions, And Strange Goings-On: The Mysteries Of Hudson Valley! 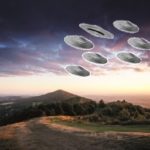