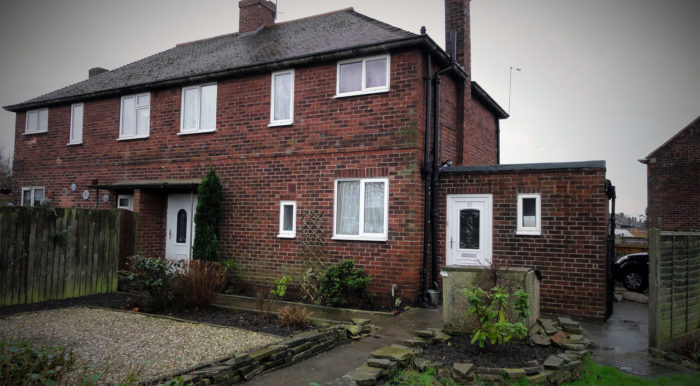 Said to be one of the most haunted houses in Europe, 30 East Drive in the small Yorkshire town of Pontefract is certainly one of the better documented, perhaps with only the Enfield Hauntings rivaling it.

Maybe no more so than in 2012 when the movie “When The Lights Went Out” hit the viewing public. Although the finer details are subject to artistic license, the essence and events of the story were not. What made the film even more intriguing is that its director is a relative to those strange but real events. Pat Holden’s Aunty Jean (Pritchard) was very much in the eye of the storm. She was witness to many of the paranormal incidents as they unfolded around her family.

The property seemingly experienced several chilling moments while filming for the movie took place. Reports of strange noises surfaced from within the walls of number 30, despite the property being empty. Such was the belief and, for some, the memories of the events so strong, that these people even worried that activity around the film, and in turn, interest in the events, was “stirring” whatever the entity was back into action.

Holden told a local newspaper at the time of the film’s release,

“One thing I have never questioned about it is its authenticity. It’s an interesting topic for a film because it’s such an extraordinary thing that happened to such ordinary people in such an ordinary place. Many people experienced it first-hand!”

You can check out the trailer of When The Light Went Out below.

In the film, the events revolve around Sally Maynard, the young daughter of Jenny and Len Maynard. In reality, the strange encounters involved Jean and Joe Pritchard and their two children – fifteen-year-old Philip and twelve-year-old Diane. As events progressed and heightened, the activity seemed to zero in on the youngest daughter.

Events began early on in 1966. They were simple and mischievous at first. Furniture would move from one place to another, or lights would flicker on and off. As the months went by, however, the activity turned stranger and more frightening.

Pools of water would form out of nowhere on the carpet of the living room or the kitchen. Strange “breathing sounds” were clearly audible, as if someone was standing right next to them. Even the apparent physical manifestation of a “black figure” began to appear more regularly.

As you might expect, the family endured much mocking from the community, although independent witnesses did report seeing strange activity. These included a policeman, the local vicar, and even the constituency MP.

The family attempted to persevere in the property, to begin with, even appearing to succeed for a time. However try as they might, the activity got steadily worse and more intense. As the end of the summer signaled in late-August 1966, the family were glad to get away to Devon. For reasons unknown, Philip opted to stay at home, and his grandmother, Sarah Scholes, watched over him.

The weather was undoubtedly hot – even for the time of year. However both Philip and Scholes would feel chillingly cold blasts of air wash over them. Already unnerved, when Scholes and her grandson saw what seemed to be white powder fall to the ground from out of nowhere, it was enough to convince her to leave the property. Taking Philip with her, Scholes rushed down the street to her daughter’s house, Marie Kelly.

The three of them returned to number 30. The powder still sat there coating the floor. Pools of water began to form – again from out of nowhere – around them where they stood. After gathering their senses, they had the water board come to investigate. Try as they might, they found no evidence of a leak – on the property or anywhere on the street.

By seven in the evening, only the two of them remained in the house. As Scholes watched television, she heard Philip call from the kitchen. She ran into the room, seeing the chaos of tea leaves and sugar all over the kitchen work surface. The tea dispenser suddenly began to spray the area with tea. Both Philip and his grandmother could clearly see the on-off switch of the machine switching back and forth. The movement prompted, as if by an invisible hand.

At her wit’s end, Scholes screamed “Stop it!” as loud and as desperately as she could. A loud bang from the hallway sounded, and then silence descended. As Scholes went to inspect the hallway, the light came on of its own accord. 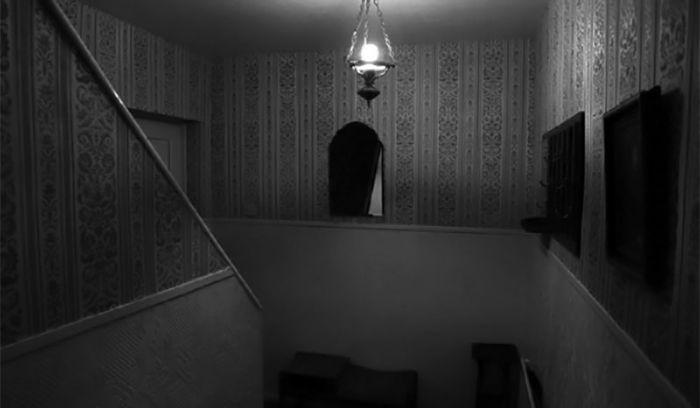 The Stairway at 30 East Drive.

A sideboard, containing crockery and plates, began to shake violently causing the crockery to rattle loudly inside. Marie Kelly again came to her mother’s aid and saw for herself the rattling sideboard and general chaos and commotion.

The activity began to calm, and the two adults agreed to speak in the morning after a good night’s sleep. When Philip’s bedroom drawers began to sway back and forth in his room, they changed their minds. Both he and his grandmother left the property as fast as they could. They would spend the night at a neighbor of the Pritchard’s and await their return the following morning.

Following the frightful night that Philip, his grandmother, and his aunt all witnessed, life appeared to return to normal. In fact, two years went by with no out-of-the-ordinary incidents at all. Then, all of a sudden, they returned. And they seemed to have returned with a vengeance.

The activity now seemed to become far more intense, especially whenever guests arrived at the Pritchard house. Loud banging noises would sound through the house, while objects would fly through the air with no warning.

The Pritchard family even invited a family friend to their home in an effort that they perform an exorcism. The entity seemed to respond to this directly. As the exorcist sprayed “holy water” throughout the family home, upside down crosses appeared on the walls.

Despite all the family witnessing the strange events, and the shadowy figure (who they called Fred), it was Diane who would attract the most intense activity.

An invisible force would throw her out of her bed regularly. Her body would also show bruising where she had been in the grip of a seemingly invisible hand. The final straw arrived when Diane had an unseen hand grab her by her throat, dragging her up the stairs. When she did manage to free herself, visible markings were present around her neck.

After that final assault, the activity simply ceased. Although never able to believe the strange events had stopped for good, the Pritchard family never experienced anything unusual again.

The video below is a recent paranormal investigation into the property.

No-one knows for sure who or what was responsible for the strange activity at 30 East drive. Many believe, however, a ghostly figure known locally as The Black Monk of Pontefract to be behind the events.

The Black Monk lived some time in the sixteenth century in and around the area the East Drive estate stands today. He had been found guilty of the rape and murder of a young girl and sentenced to death. He was hung for his crimes. The gallows where he met his end once stood exactly where 30 East Drive now stands.

In 2015, the property was in the middle of controversy when TV’s Most Haunted Live stated they would broadcast live from the house on Halloween. While crowds gathered outside in the dark, cold October night, many more tuned in at home. As one of the Most Haunted crew came down the stairs (Karl), something appeared to drag him backward. As you might expect, the presenter made much of this.

Eagle-eyed viewers at home, however, studied the scene constantly, before declaring less than twenty-four hours later, the incident was fake. It most certainly was. A rope is clearly visible in the shot of Karl being “dragged” from behind. You can view the clip below and see what you think. The scene was largely seen as embarrassing for the show, and criticism would come from all platforms.

There have been many other investigations and television shows made regarding the haunting. Many people even claim they have captured the shadowy figure known as the Black Monk in photographs. The property is even available to the public for tours, [1] as well as events and serious investigations.

Whatever the causes of the disturbances, they were very real, of that there is no doubt. Whether or not that presence still resides there today is another matter. That alone will lure many a paranormal investigator to its door. Perhaps the activity will begin again, as suddenly as it stopped almost half a century ago. Or maybe it is something more connected to the Pritchards themselves and were a “once in a lifetime” occurrence.

Check out the video below, one of many such investigations already conducted. As always, make of their finding what you will.