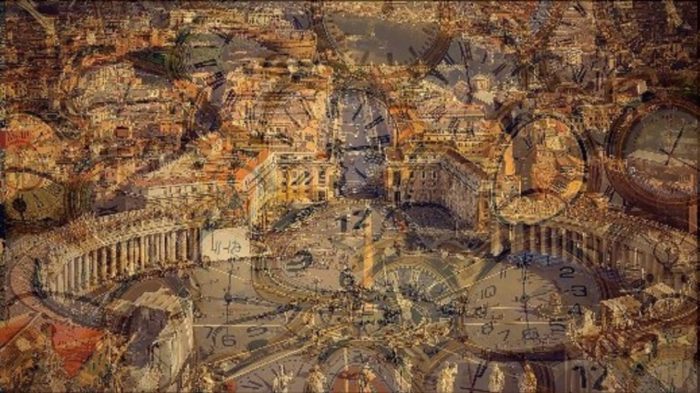 The Catholic Church, or more specifically, The Vatican, is no stranger to controversy or conspiracy. And while some of these are outlandish and to be treated with caution, others are dripping in the gritty reality of organized crime, intelligence agency connections, and ruthless people of global influence. Perhaps what makes the claims and conspiracies of the Chronovisor so intriguingly appealing then is that it features huge helpings of all of those explosive components. And like many things connected to the inner workings of Vatican City, it is enveloped in mystery.

Time travel and the Vatican

The Chronovisor first appeared in mainstream conspiracy circles in the 2002 book ‘The Vatican’s New Mystery’ (‘Le Nouveau Mystere du Vatican’) by Father Francois Brune, who is an expert of sorts on the intertwining of paranormal incidents and religion. However, an Italian newspaper article under the headline “A Machine That Photographs The Past Has Finally Been Invented” shows there was at least some public awareness of the claim as far back as 1972. And when we look a little deeper, it appears connections go in many directions, all indicating at least some partial measure of truth in a seemingly ludicrous notion.

The origins of the Chronovisor appear to go back to the 1950s which, relatively speaking, is very recently in the Vatican’s long history. Indeed, perhaps this detail that the device was produced in the modern age and was not a mysterious relic preserved since antiquity lends the claims a little more credibility. Or, might the story of its recent development actually be to cover up such ancient origins lest its existence should come to light.

According to the aforementioned article, Father Ernetti was an Italian physicist who became a priest later in life. He would lead the project in “creating” the device, which was a relatively small object “composed entirely of precious alloys”, and utilizing a screen connected to tubes and tuning dials. Nobel prize winner and fellow physicist, Enrico Fermi would closely advise Ernetti with technical advice and “important information”. However, it is the involvement of another controversial scientist that might raise an eyebrow or two. One-time SS member and eventual leading rocket scientist of NASA through Operation Paperclip, Wernher von Braun would also closely advise Ernetti.

Whether von Braun was directly involved or not, another apparent Nazi secret project was Die Glocke, or Nazi Bell worked on in the last years of the war. According to the claims, this device displayed a lot of the same characteristics as the Chronovisor. Perhaps it is also worth remembering, whether officially or not, the Catholic Church’s initial support for Hitler’s regime. It is certainly possible that such high-ranking Vatican scientists might well have had access to secret Nazi technology or plans thereof. 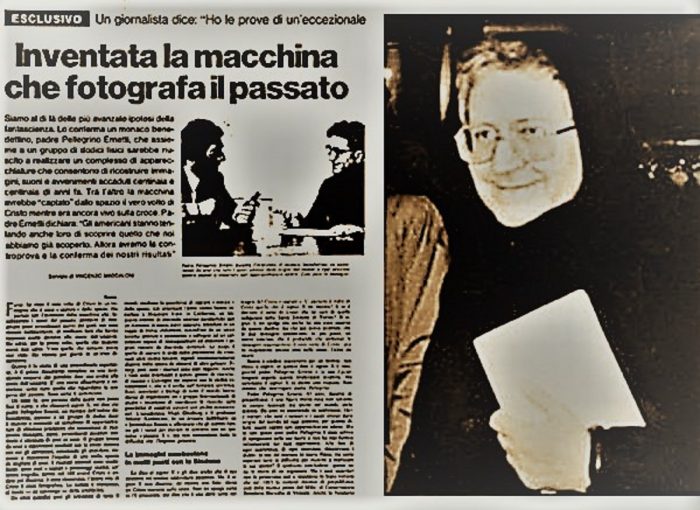 An alleged report of the Chronovisor in a 1972 newspaper article

One Of The Greatest Secrets Of Humanity!

While the Chronovisor is not a time machine in the sense that it will transport a person literally back to that point in time, it does claim to allow those who use it to see moments in time, [1] predominantly from the past, but also the near future.

The device works by utilizing the “residual electromagnetic radiation left over by numerous processes”. Furthermore, the energy released allowed the device to “detect” the frequencies and energies in spacetime from the past and then present moving images “like a film” of those events. He didn’t elaborate on these processes, however. And although he would discuss some of the places he had seen, he wouldn’t reveal too many intricacies about the workings of the device. Or indeed its location. It was of genuine concern to Ernetti that should someone with less than benevolent intentions take hold of the device it could result in the “scariest dictatorship the world has ever seen”.

Ernetti claimed to have witnessed many historical events, including the founding of Rome in 753 BC, the destruction of Sodom and Gomorrah, as well as “the crucifixion of Christ”. Of this last event, Ernetti would offer proof in the form of a photograph of the face of Jesus. While that photograph is quite obviously a fake, the device itself might have more grounding than we at first think. Not least due to the Vatican’s own words on the matter. We will look at those very shortly. However, the death of an eccentric but brilliant man in Los Angeles in 1953 might provide a clue. And another connection.

Before we look at that grim incident, check out the short video below. It goes over the basics of the Chronovisor conspiracy.

Another intriguing connection to the apparent time-viewing device is the life and death of Douglas K. DeVorss. On 24th September 1953, DeVorss was shot at point-blank range in his office in Los Angeles by an enraged man who claimed DeVorss was having an affair with his wife. Incidentally, the woman in question vehemently denied this. Regardless, the shooter was imprisoned for second-degree murder shortly after.

At the time of his death, DeVorss was working on publishing the life’s work of Baird T. Spalding, ‘Life and Teachings of the Masters of the Far East’. Spalding was another equally controversial person who himself had passed away only months earlier at 95-years-old. According to Spalding, from 1894 to 1897 he had toured India, China, Tibet, and Iran (then Persia) with a “party of twelve”, soaking up the wisdom of “elder brothers” and wise men of the Himalayas.

These experiences formed the backbone of his four-volume work, and which are remarkably insightful. However, it would also come to light that Spalding was “penniless” at the time of his death. And what’s more, there appeared to be no proof of any wealth that would have allowed him to travel so extensively when he did. Many people would label Spalding a fraud. However, it is hard to deny the authenticity of the “insights” put across by his writing. Insights that far from suggest fraudulent claims.

Spalding also claims that after returning from these travels he was part of a two-man project with engineer, Charles Steinmetz. That project would result in the invention of a “Camera of Past Events” that could “peer back into time”. Whether this device or the blueprints of it found their way to DeVorss is unknown. His death, however, is a little suspicious in light of Spalding’s claims. 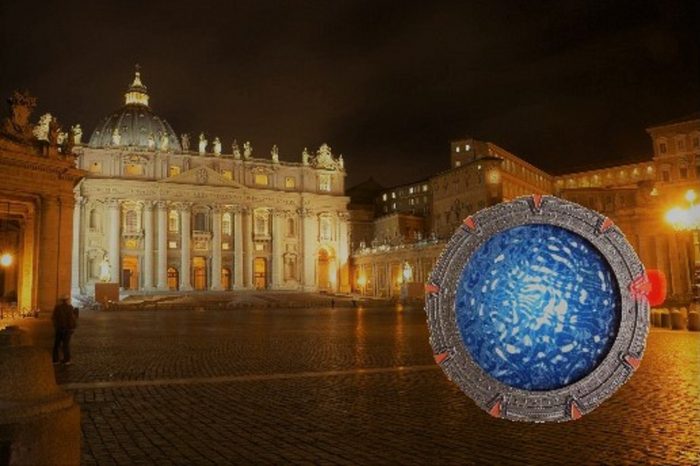 Does the Chronovisor open a portal?

Links To The CIA And Project Pegasus?

We have written several articles on secret time-travel and remote viewing missions by the CIA. Many believe the roots of the technology utilized in these projects reside in the Chronovisor. Not only can such intelligence agencies peer into the near future, they now can send “soldiers” into the future. And to different planets, before bringing them back to the present and even age-reversing them. If, of course, you subscribe to such conspiracies.

According to a claim in early-2017, albeit in the tabloid platforms, author and researcher, Alfred Lambremont Webre would state that the Vatican gave “quantum access technology” to the CIA in the 1960s. Furthermore, he would claim, the evidence of this was in the Wikileaks data. He would even state that not only were the Vatican and the CIA “close organizations” but that the Vatican had a big hand in the founding of the intelligence agency. Further still, other intelligence agencies, including the British, also have access to the technology. The Vatican, he would claim, “subcontract out” the device to states sympathetic to their ideology.

It is an interesting notion and one that divides those in the UFO and conspiracy communities. Some believe Webre to be spot on in his assessments of secret world governments. Others, however, believe him to be eccentric to the extreme and a person to hold at a distance. In spite of his law degree from Yale.

The short video below goes over the connections between the Chronovisor and the eventual time-travel experiments of the CIA.

Whether the apparent time-viewing camera invented by Spalding and the Chronovisor that came into existence shortly after DeVorss’s death are, in fact, one and the same is open to debate. The connection is intriguing, however, and certainly one that might require further investigation.

Of course, many believe, both inside and outside the Catholic Church, the claims to be nothing more than a hoax. For his part, Ernetti would ultimately admit that the photograph of Jesus at the crucifixion was fake. However, he would insist that the device itself was very real and very functional. He had wished to provide proof of the device. However, he also knew that allowing too many people access to it could have catastrophic consequences. He elaborated “Pope Pius XII forbade us to disclose any details about this device because the machine was very dangerous”.

Perhaps most intriguing of all, especially in light of the claims from high-ranking Vatican members that the Chronovisor was nothing more than a hoax, was the decree by the Vatican themselves. According to this strict warning, “anyone using an instrument of such characteristics (as the Chronovisor) would be excommunicated”.

Like the entire affair, there is a certain murkiness and ambiguity to this apparent warning. What if we accept, just for argument’s sake, that the Vatican does have such a device in its possession. Then given some of their “unofficial” connections, what other groups might also have access to such a technology?

The video below features an extended discussion about such claims, and more specifically their apparent origins. 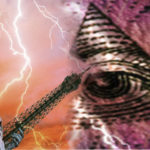 The Breakaway Society Theories: Conspiracies Of A Secret Elite 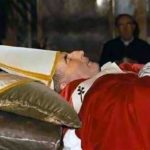 The Highly Suspicious Death Of Pope John Paul I