In 2015 a revealing documentary hit the mainstream. Titled Ghost Rockets, the film opened up a phenomenon that residents of Sweden had experienced since the aftermath of the Second World War. The project – led by the chairman of UFO-Sweden, Clas Svahn – conducted extensive investigations into the strange sightings.

Many hundreds of incidents of these Ghost Rockets occurred in the mid-to-late 1940s alone. Some reported even seeing these elongated rocket shaped crafts entering various lakes and bodies of water. However, all efforts to find even a trace of debris or some other indicator of their presence was fruitless.

In the climate of the Cold War, it seemed to governments of the west, that the Soviet Union must be responsible. Research carried out after the fact on now available Soviet archives, suggest this isn’t the case. 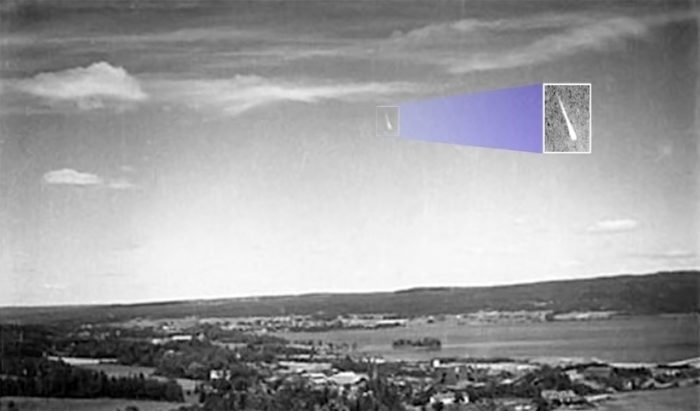 More mundane explanations offered was the sightings were nothing more than meteors burning up as they entered the Earth’s atmosphere. However the sheer weight of reports that clearly describe “machine-like” craft counters this considerably. Not to mention the claims of the objects changing direction in mid-air.

Before we look at some of these sightings, check out the trailer of the “Ghost Rockets” documentary below.

In the summer of 1980, while walking along the banks of Lake Nammajaure, Liz and Bo Berg were witness to a strange rocket shaped craft. The metallic object flew over their heads before it made a sudden U-turn, and headed straight for them. Before it reached their location, however, it descended into the water, disappearing from their sight.

The sound of the craft caught their attention first. Liz Berg describing it as a “swooshing sound” that made her think “a Soviet cruise missile” was overhead. That was until they saw it stop and perform the 180-degree turn.

The pair made a report of the sighting to the military who immediately came out to interview them.

They were however seemingly concerned with asking the pair the same questions over and over again. What color was the object? Where exactly was the pair when the incident took place? Did they hear any particular noise?

Bo Berg stated later that he got the impression they would not receive any information on exactly what they saw. What’s more, their interviewers acted as if it were a “debriefing” session as opposed to merely taking their report.

As he suspected, Bo and Liz Berg have not heard anything about what they witnessed that afternoon. As they would find out years later, they were just two of many people who had witnessed very similar objects.

1946 and the Beginnings of the Ghost Rocket Phenomenon

As peace finally took hold of Europe for the first time in the 1940s, people were still in “alert” mode from the years of fighting. In particular, the years of aerial bombardment heightened this alertness.

Although Europe was for the moment largely at peace, a new, “cold war” was developing. The communist Soviet Union literally walled off “their” part of Europe. They operated in complete secrecy from the “evils” of the west, something which made the west suspicious. Perhaps because of this, many of the initial sightings caused much panic in the populace. Many would think they were under attack from the Soviet Union as much as aliens from another world.

The first recorded sighting took place on 9th June 1946 over Helsinki, Finland. A strange light shot across the sky, accompanied by the “sound of thunder”, visible for around ten minutes. The following evening, it appeared again, only this time, it performed a complete turn in the air. It then shot off back in the direction it had arrived from.

On 15th July a strange “lighted object” shot through the skies over Oslo. The incident occurred an hour before midnight and played out in front of multiple people. Witnesses quickly discounted that it might be natural phenomena due to the “completely straight line” the object went along. In less than a minute, it vanished from sight.

The following evening, strange lights – named “ghost rockets” by the media – appeared in Rogaland, Norway. One witness stated that they had seen the object over the Usken River.

The short video below looks at sightings during this time.

Sightings of the Ghost Rockets would continue throughout the decades, with no adequate explanation forthcoming. Although incidents were reported throughout Scandinavia, the vast majority appeared to take place over Swedish airspace. In response to the wave of sightings, the Swedish government formed a dedicated committee to investigate the phenomena.

Strangely, several months after these investigations began Swedish newspapers began to stop printing reports of such sightings. Some suspected that this was at the behest of the Ghost Rockets committee group. Reports of these incidents in Sweden still regularly appeared however in other European country’s media.

It was around this time that the official Swedish government stance on the mystery sightings was that they were Russian. This is a notion that is very likely incorrect, for reasons we will look at shortly.

In 1984 – four years after the aforementioned sightings of the Bergs – Sweden officially declassified their Ghost Rocket files. Upon examination by interested UFO investigators, over 1,500 reports were available. All locked away within these files since the sightings began just after World War Two. Many of these files still have reports to follow up (where possible). So it might still be the case that new evidence may still come to light.

The video below looks at some of these files and potential evidence.

That the sightings began in the immediate months following the Second World War’s end, given the literal wall of secrecy that the Soviet government had put on their activities, was justification enough that they were behind the sightings.

This theory doesn’t really stand up to scrutiny, however. Given the huge continued presence of the American military on their doorstep, not to mention the depletion of their armed forces due to war, it would not make sense that the Soviets would want to draw attention to themselves. Particularly if it was weapons they were testing. They could do in complete secrecy in private in the wilderness of Siberia.

And as sound an explanation that meteors are responsible, witness statements suggests otherwise.

So this leaves realistically two possibilities. The first, that the Ghost Rockets are secret military tests conducted by western governments. The second, and perhaps most controversial – they are the product of another, non-human intelligence.

There is one other point to consider. The amount of witnesses that see the object over, or even submerge in rivers, lakes and other bodies of water. Many ufologists believe there is a connection to strange sightings over water and alleged hidden underwater alien bases. Might this be why no debris is ever found? By the time searches are conducted, the object has made its way to a hidden destination?

Check out the video below – an interview with Clas Svahn regarding the Ghost Rocket sightings.